Two Gazans have manufactured a device to extract wood vinegar from trees, a material that is promising for treating soil issues in the Gaza Strip. 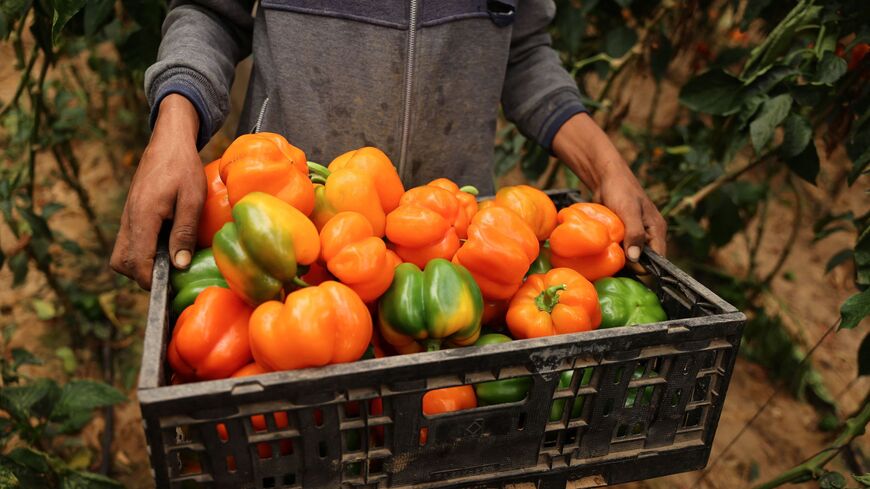 A Palestinian worker picks bell peppers in a farm in the city of Rafah in the southern Gaza Strip, on June 21, 2021. - SAID KHATIB/AFP via Getty Images

They say the product has proven to be a solution to soil fertility problems facing farmers in the Gaza Strip.

The idea first came to Ahmed, a graphic and multimedia designer who was already working on an agricultural project called “Start-Up 1” for the production of bioorganic fertilizers when he was troubled by last winter’s impacts on his potato crop. After intensive research, Ahmed and Afifi came up with wood vinegar as a solution to this problem.

Wood vinegar protects plants against the temperature fluctuations and offers other benefits. “Wood vinegar is a great product to control nematodes, mosquitos and flies as it acts as a repellent. It can also be added in the composting process and gets rid of offensive odors,” Ahmed explained.

“The product is all the more important in light of the high salinity of irrigation water and the use of pesticides. Our main goal is to spread the culture of using biofertilizers and reduce the use of chemical control,” Ahmed told Al-Monitor.

Devices for the production of wood vinegar are not available in the Gaza Strip and cannot be imported due to Israeli restrictions on imports.

“We were able to manufacture one device locally with the capabilities available inside Gaza,” said Ahmed, adding that they're now working to refine the design. “We want to replace the iron with stainless steel to make it a completely healthy and safe device.”

The two young Palestinians have also been able to use their device to produce charcoal extracts used to flavor food, a product less harmful than actual charcoal used in cooking. They also plan to use wood vinegar in animal fodder, as an Australian study showed that it improves the taste of meat as well as helps animals' immune systems.

Nizar al-Wahidi, the former director of the Guidance and Development Department at the Gaza Ministry of Agriculture, stressed the importance of such food projects amid the worsening global food crisis.

“The search for agricultural alternatives, recycling and the reuse of everything that can be extracted from solid and liquid waste is the basis of the green economy that the world seeks” he told Al-Monitor.

Wahidi said that the wood used in the production of vinegar used to control agricultural pests must be safely sourced, not been exposed to pesticides and free of any chemicals that could affect the quality of the agricultural products it's used to treat. He called on Gaza's official and civil leadership to pay attention to the innovative ideas of young people in Gaza and provide business incubators and accelerators to support students in putting their ideas into practice. It's particularly important amid the global problems that threaten food security and the environment, among other issues, he added.

Afifi and Ahmed hope that the Gaza authorities will ban the importation of wood vinegar and are set to start production of large quantities of wood vinegar for the local market, where they expect very high demand. They assured Al-Monitor their prices will be competitive.