A determined farmer who worked for nearly a decade to grow a fruit new to the Gaza Strip has succeeded. 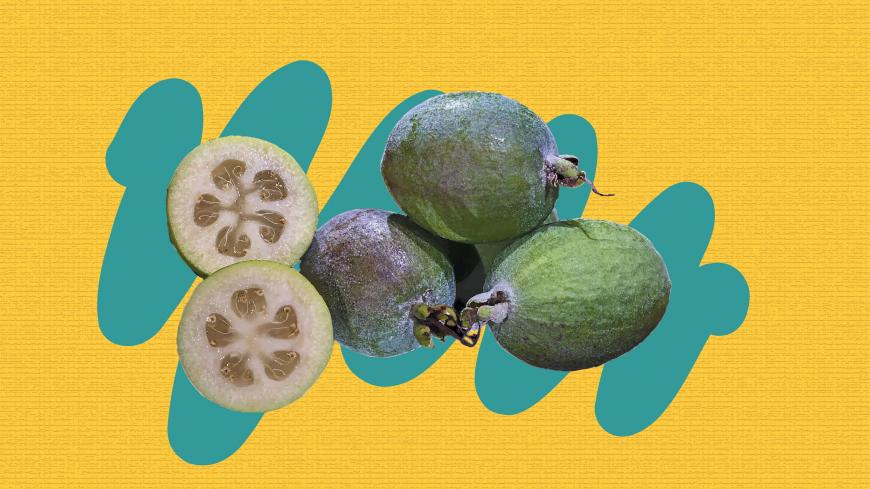 GAZA CITY, Gaza Strip — After eight years of experimenting, Gazan farmer Massoud al-Zane last month succeeded in growing feijoa, an egg-shaped fruit with a cream-colored flesh and a jelly-like center, for the first time in Palestine.

During Al-Monitor’s visit to the nursery in Ezbet Abed Rabbo neighborhood of Jabaliya town, north of Gaza City, Zane was busy talking to some 60 university students who came from different agriculture faculties to listen to the success story of growing this fruit for the first time in the Gaza Strip. Zane, 52, said the feijoa is the fruit of the Acca sellowiana, a small tree commonly found in Brazil and northern Argentina that produces guava-shaped green fruit. The production cycle of feijoa takes a whole year, Zane said.

Zane said he obtained feijoa seeds from the Ministry of Agriculture in 2009, when they were distributed to some farmers. The farmers were to experiment with the seeds in various Gaza locations in different types of soil and at varying levels of water and soil salinity. Planting also depended on the availability of manure and chloride, which help the plant grow.

Zane, who followed in his father's footsteps as a farmer, said the warm weather in Gaza suits the growth of the tree, as it can endure high temperatures, cold spells and high water salinity. The tree is seldom infected with pests, so farmers do not have to use pesticides and can earn a higher profit as a result.

Mahmoud Barakat, one of the students who visited the nursery and who studies at the Faculty of Agriculture and Environment at Al-Azhar University in Gaza, told Al-Monitor, “I tasted feijoa and thought it was delicious. It tastes like a mix of guava and pineapple and smells exactly like strawberry.” Indeed, the fruit is also called a pineapple guava or strawberry guava.

He believes the public will love the fruit once it becomes available in the markets next fall. “Besides, people love trying something new,” he added.

Nizar al-Wahidi, the director of water at the Ministry of Agriculture, told Al-Monitor, “In 2009, we brought hundreds of feijoa seeds from Argentina to test them in different farms and nurseries owned by local farmers. Only today can we say that we succeeded in producing the first fruits of this shrub.”

Wahidi said that bringing new seeds into the Gaza Strip is part of the Ministry of Agriculture’s plan to diversify crops and promote the adoption of new ones that are compatible with Gaza’s water salinity and freshwater scarcity. He said citizens depend mainly on desalination plants to obtain drinking water, as 95% of groundwater in Gaza is unfit for drinking and can only be used for irrigation.

“Feijoa depends on saline water, unlike many fruits that drain the available freshwater in Gaza. Therefore, growing feijoa could be a successful project that contributes to reviving the national economy once hundreds of dunams are cultivated to satisfy local market and international demands,” Wahidi said.

He said of feijoa, “Besides being a delicious fruit, it can be used to make desserts and homemade drinks as an alternative to store-bought drinks that contain artificial flavors and coloring ingredients.”

Wahidi said feijoa is rich in iodine, which helps treat thyroid gland disease. Antioxidants, which can help fight cancer, are also found in the fruit.

He said farmers and local agricultural authorities have previous succeeded in growing and producing other plants and fruits that are new to the Gaza Strip. In November, Gaza's Ministry of Agriculture said pineapples, broccoli and beets had been produced for the first time in Gaza. “The Ministry of Agriculture is currently planning to increase feijoa production and launch a media campaign to tell citizens about it in order to encourage local consumption,” Wahidi said.

Zane’s feijoa production is still in its infancy, but he is already planning to use 5 dunams (1.2 acres) in his nursery to plant large quantities of feijoa by the end of the year.

Zane worries about a new war between Hamas and Israel in Gaza, which could mean the destruction of his nursery. “During the last war on Gaza in 2014, Israeli tanks destroyed my nursery and crops,” Zane said. Due to the high population density in the Gaza Strip, the relatively empty border area is the most suitable place for agriculture, but also the most vulnerable.

Gaza's agricultural losses due to the Israeli war on Gaza in 2014 reached $550 million, including $350 million in direct losses and $200 million in indirect losses, according to the Ministry of Agriculture and the Palestinian NGO Network.