A new Egyptian satellite was recently launched as part of efforts to expand Egypt’s media presence in the African continent. 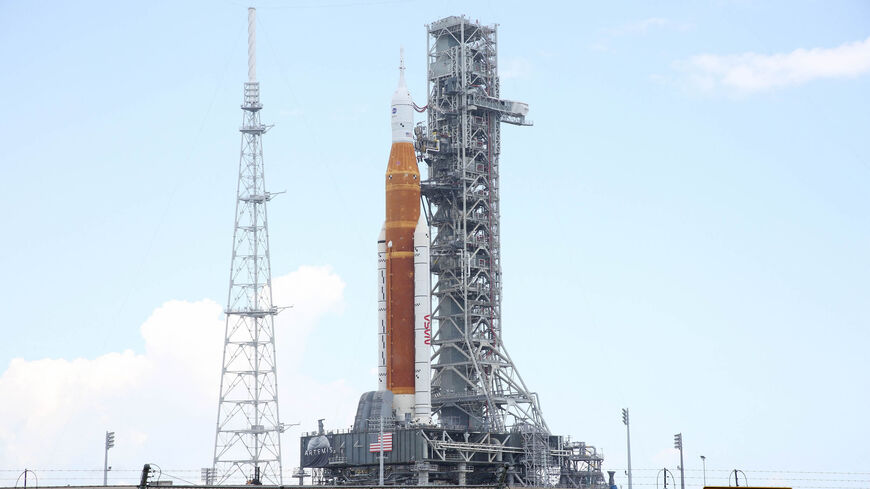 A view of the massive Artemis I Space Launch System rocket and Orion spacecraft at Launch Pad 39B after rolling out from the Vehicle Assembly Building for a second time at the Kennedy Space Center in Florida, United States, June 6, 2022. - Gregg Newton/AFP via Getty Images

The new satellite is to replace Nilesat 201, whose lifespan is expected to end in 2028.

The Nilesat 301 satellite will broaden coverage to include South African countries and the Nile Basin countries, aiming for better communication with the African continent’s peoples, Amr Imam, director of the Nilesat 301 project, told Al-Monitor via phone.

Imam said the move is in line with the Egyptian political leadership’s endeavors to deepen Egyptian-African relations.

According to Imam, the Nilesat 301 satellite consists of 38 transponders, compared to 26 in Nilesat 201, and each transponder includes 10 TV channels.

The launching comes at a time relations between Egypt and Ethiopia remain strained over the Grand Ethiopian Renaissance Dam (GERD) crisis. While Egypt seeks a legally binding agreement that guarantees its rights to the Nile waters, Ethiopia insists on filling the dam’s reservoir without an agreement.

Imam said that the new satellite will enable Egypt to compete for influence and boost its presence in Africa, specifically in the Horn of Africa, which is a new market for the Egyptian Nilesat satellites.

He noted that new Egyptian channels addressed to Africans will be established in the future as part of the new satellite with the aim to enhance cultural exchange between Egypt and Africa.

Egypt’s media expansion to Africa is not new. Under the rule of late Egyptian President Gamal Abdel Nasser, radio stations targeting the African continent were established with the aim of supporting the national liberation movements in Africa.

After Abdel Nasser’s death, the Egyptian radios’ role in Africa declined because they had not been upgraded or updated, and seven radio stations targeting the African continent had been shut down since 2006. This is while 10 other radio stations targeting Africa continue to operate about four hours per day, which is a short period that does not reflect the role Egypt aspires to play in Africa.

Over the past years, the Egyptian government has been working on promoting its media message to the African continent. The parliamentary committee for African affairs revealed in February 2020 an Egyptian media message strategy focused on Africa. The strategy pointed at the Egyptian newspapers’ rare coverage of cultural and environmental activities in Africa without putting in place clear mechanisms for its implementation.

Mohamed Abdel Karim, researcher specializing in African affairs at Cairo University, told Al-Monitor via phone that the Nilesat 301 is an extension of the efforts to set up radio stations targeting Africa.

He said that the Egypt National Media Authority has qualified staff that should be exploited to establish an Egyptian regional channel targeting Africa. This move, he said, would represent a major Egyptian investment in the continent.

Abdel Karim stressed that Egypt needs to address its past policies toward Africa, which led to a decline in its role in the continent. This will only be done by establishing a professional channel for Africa, whose mission is to strengthen intellectual and cultural ties between Egypt and the rest of the African countries, particularly since Cairo needs to defend its right to Nile waters amid the GERD crisis and to confront the idea circulated by Western media whereby Egypt opposes Ethiopian interests, he concluded.