How Egypt plans to 'return to Africa'

Egypt is hoping to re-establish ties with other African countries and remain active in the Horn of Africa, as it is a strategic border area. 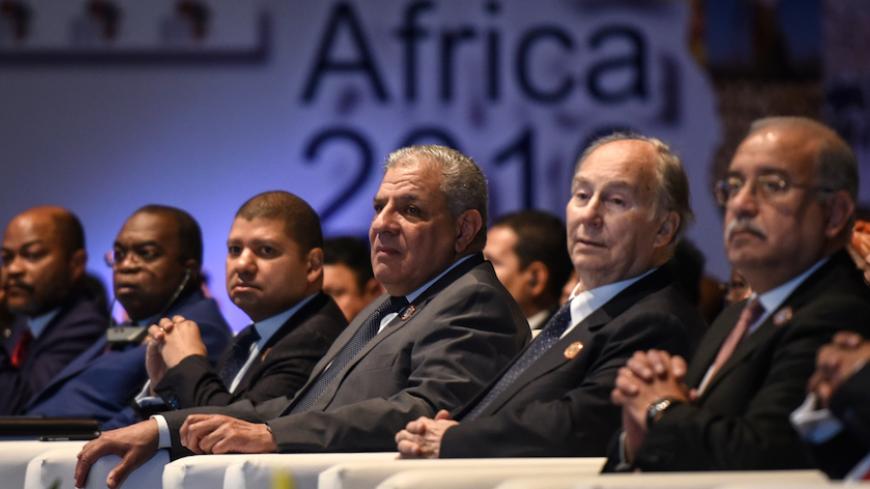 CAIRO — Representatives from Egypt, other African nations and Japan met in Nairobi, Kenya, Aug. 27 for the launch of the sixth Tokyo International Conference on African Development (TICAD) Summit. According to TICAD’s official website, the conference aims to highlight the importance and urgency of development issues in the African continent, as well as to “promote high-level policy dialogue between African leaders and development partners.”

At the conference, Egypt, represented by a delegation headed by former Prime Minister Ibrahim Mehleb, signed a number of deals with Japan and other African nations aimed at promoting African development.

Egypt’s participation in the conference comes within the context of Cairo’s recent efforts to strengthen ties with continental partners.

Headed by Hatem Bashat, the African Affairs Committee of the Egyptian parliament is looking for ways to coordinate between Egypt and Nile Basin countries and to use Egypt’s soft power to regain its pivotal African role after decades of estrangement.

Work at the Grand Ethiopian Renaissance Dam started in April 2011. The project has cost about $4.7 billion and is expected to generate 6,000 megawatts of electricity — the project can store up to 74 billion cubic meters of water. According to the timeline of the project, it should be completed by July 2017.

For the first time, the rising parliamentary committee has summoned seven ministries to attend the House of Representatives for questioning and discussion on ways to help Nile Basin countries by using soft power to reconnect Egypt to Africa and to re-establish a communication that might contribute positively to Egypt’s share of water, which could be significantly affected by the Renaissance Dam.

The ministries of Electricity, Health, Emigration and Expatriates, Industry and Foreign Trade, Civil Aviation and Foreign Affairs were represented either by the ministers or by their deputies to discuss mechanisms of supporting Nile Basin countries, especially Somalia, which is a strategic country on both the military and the services level.

Minister of Electricity and Energy Mohamed Shaker mentioned during the Aug. 8 meeting that the ministry is willing to pay field visits to be acquainted with the needs of the Somali electricity grids as a first step in helping African countries.

Regarding medical aid, the Ministry of Health is seeking to increase the number of medical convoys to all African countries, including Ethiopia. Minister of Health Ahmed Emad El-Din Rady stated in the meeting that he made four trips in the 11 years since he assumed office, three of which were to Africa. He also stressed that African countries’ need for medical aid is significant, and he gave an example of the Ethiopian minister of interior receiving treatment in Cairo.

According to the health minister’s speech, Egypt has several pharmaceutical factories in Africa, and Egypt’s government is keen on sending highly experienced doctors, including Magdi Yacoub, who has performed with his medical team 67 open-heart surgeries through the Aswan Heart Center, and Kamal Ibrahim, who performs scoliosis surgeries. Rady also revealed Egypt’s willingness to train five to 10 Somali doctors in various specializations and said, “Ethiopia depends on Egypt mainly for the inoculations and vaccines made by the Vacsera Company.”

The African Affairs Committee has called for the Pan-African Parliament to hold the sessions of the next round in Sharm el-Sheikh in October. Authorities are cooperating with the committee to prepare for hosting the sessions.

“The AAC is keen on communicating with all sides to achieve the outreach and productive cooperation that we seek with African countries,” Bashat said. He added that sports, which represent one of Egypt’s soft powers, play an integral part in deepening the relationships with the African countries.

Bashat heads the committee, as he has experience as a former undersecretary of Egypt’s General Intelligence where he was responsible for the Nile Basin file for 17 years. He also organized several conferences on the reconciliation between the National Democratic Alliance and the Sudanese government. Bashat participated and organized several workshops on reconciliation between the North Sudan and South Sudan governments.

Bashat told Al-Monitor that their intention aims at “returning to Africa” in general and reviving Cairo’s relations with other African countries. He added that Egypt is lacking in terms of cooperation between African ministries but “now is the time to cooperate.”

Bashat said that Ethiopia’s official move regarding the Renaissance Dam would start when the tripartite committee, which consists of Egyptian, Sudanese and Ethiopian experts, finishes its reports so that the latest reports and updates can be reviewed and acted upon accordingly.

Meanwhile, Ambassador Mohammed Idris, the assistant foreign minister for African affairs, stressed the importance that Egypt remain active in the Horn of Africa, as it is a strategic border area that neighbors the Red Sea and the Suez Canal navigation stream. Idris said that Egypt’s aim in cooperating with Somalia is to support Somali unity through coordination with the central government.

In another meeting, the African Affairs Committee met with representatives from the Egyptian Radio and Television Union (ERTU). According to Safaa Hegazy, the head of ERTU, Egypt is seeking to become a member again in the African Radio Stations Union to allow news exchange among the Arab radios in Africa, which would allow Egyptians to have access to news, activities and main events on the continent.

Member of parliament Mostafa El Guendy supports the establishment of a ministry for African affairs, and Bashat agreed with him and added that the Egyptian presence in Africa should be both civil and military.

Guendy also suggested the establishment of a state-affiliated company to ensure the commercial transactions there. The African Affairs Committee agreed.

The committee started arranging sports cooperation and hopes to reach an Egyptian-African audience through hosting African championships. Khaled Abdel Aziz, the minister of youth and sports, said that Egypt has a strong main structure that allows it to host championships for individual sports such as cue sports and Taekwondo.

Abdel Aziz added that there are memorandums of understanding between Egypt and a number of African countries. According to him, the memorandums should be put into effect through sports as a way to reach out to Africa. He also revealed that Egypt holds training courses for youths in cooperation with the Nasser Military Academy. “The courses train the youth on the definition of national security and the strategies to work on highly important files such as working on the relations with the Nile Basin countries,” Abdel Aziz added.