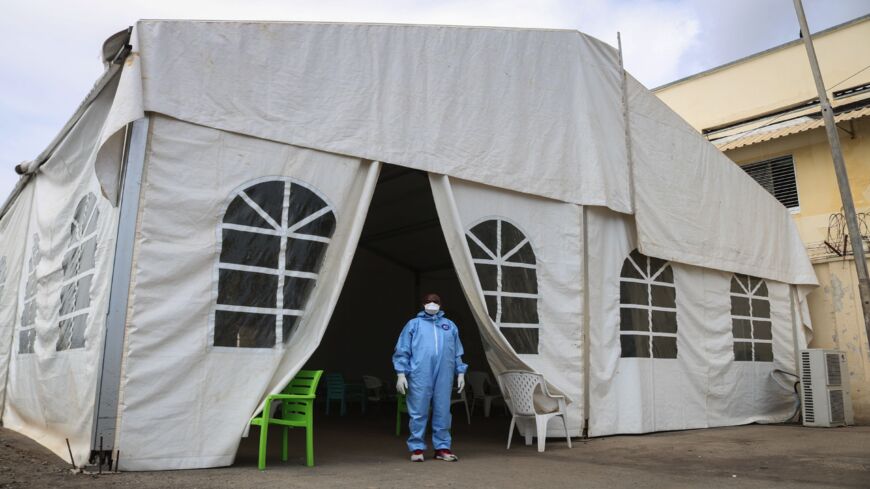 Staff members of the Ministry of Health prepare to take samples for testing for the COVID-19 coronavirus at the testing unit at the Bouffard hospital in Djibouti on May 2, 2020. - AFP via Getty Images

CAIRO — In a Facebook post on June 19, the Egyptian Ministry of Foreign Affairs announced the establishment of a malaria control project in South Sudan to be funded by the ministry’s Agency of Partnership for Development.

The announcement came after Egypt’s ambassador to Rwanda, Ahmed El Ansary, signed on June 11 a memorandum of understanding to build an Egyptian center for heart surgeries in the Rwandan capital, Kigali.

The Egyptian Foreign Ministry said on June 11 that the center, which is the first of its kind in East Africa, would provide treatment for cardiovascular diseases (especially among children), training for medical staff and nurses, and biomedical research.

During the signing ceremony, Ansary said Egypt is keen on developing the health care sector in Rwanda and providing all kinds of support, driven by its commitment toward African countries. He expressed hope such moves would promote cooperation in the health sector, especially in relation to medications and medical supplies.

This is not the first instance of African-Egyptian cooperation in the health sector. During a visit to Djibouti on May 27, Egyptian President Abdel Fattah al-Sisi announced that an Egyptian hospital will be set up in Djibouti in cooperation between the two countries.

Hani Raslan, head of the Nile Basin Studies Unit at Al-Ahram Center for Political and Strategic Studies, told Al-Monitor, “These projects are part of the Egyptian efforts to serve the African continent and restore Cairo’s historical role and standing in the continent. Egypt is deploying all efforts in this regard so as to benefit the Nile Basin or other African countries.”

Raslan said the medical projects the Foreign Ministry recently announced are part of Egypt's plan to provide services or transfer knowledge, training and expertise to Africa, and of a broader activity involving the promotion of bilateral relations.

“This activity is not new. Egypt had previously launched an initiative to provide Hepatitis C treatment for 1 million Africans,” he added.

In March 2019, Sisi launched an initiative to eliminate hepatitis C among 1 million Africans at the Arab and African Youth Platform in Aswan.

An official source at the Egyptian Ministry of Health and Population told Al-Monitor on condition of anonymity, “The initiative to provide hepatitis C treatment for 1 million Africans is currently focused on three African countries, namely South Sudan, Eritrea and Chad, where more than 50,000 people received the treatment so far. This is added to the training provided to their medical staff under the Egyptian initiative, and the provision of the necessary medical supplies and medications.”

The source explained, “There is cooperation [between the Health Ministry] with the Egyptian Ministry of Foreign Affairs to send medical convoys and doctors to a number of African countries, including South Sudan and Somalia, as part of bilateral cooperation to help these countries improve their health sectors.”

Rakha Hassan, a former assistant foreign minister and member of the Egyptian Council for Foreign Affairs, told Al-Monitor, “The implementation of medical projects in some African countries and the provision of [specialized] health services to [African] citizens help promote their relations with Egypt at the popular and official levels.”

Hassan added, “Some African countries are in dire need of these medical projects, whether it is Rwanda or South Sudan. That is because a large population segment still depends on primitive and herbal remedies, and I have seen that firsthand in some African countries. There is a need for hospitals, hospital equipment and medical convoys with the needed supplies and medications, which would improve services and human development in these countries.”

“Egypt is training doctors and nurses in some African countries (which he did not name) and building Egyptian hospitals and medical centers in Djibouti and Rwanda, which is a great addition to the health sector there," he said.

Dr. Alaa Ghannam, director of the Right to Health program at the Egyptian Initiative for Personal Rights, told Al-Monitor, “Egypt has been implementing development projects in African countries since the 1960s, but its role declined some years ago, which is why it is currently seeking to restore its leading role in the health sector and support African countries. Such a move needs to be invested strategically so as to improve relations and promote our role in Africa, particularly since the Nile waters consist of a major challenge,” in reference to the crisis over the Grand Ethiopian Renaissance Dam (GERD).

Ghannam believes “the export of COVID-19 vaccines to African countries is another potential cooperation scope that Egypt is willing to target.”

The Egyptian Health Ministry said on June 17 that Health Minister Hala Zayed discussed a plan to produce the Russian Sputnik V COVID-19 vaccine in Egypt and export them to the African continent after meeting domestic needs.

Zayed had said at a meeting for an African Union body, which she attended on behalf of Sisi on Jan. 14, that Egypt is ready to meet the African countries’ need through its locally produced COVID-19 vaccines as soon as manufacturing starts.

Raslan noted that many countries — which he did not name — have competed for influence in Africa at a time when Egypt’s role there receded. But Egypt is back now to restore its role, he said, adding these projects support Egyptian-African relations as well as Arab-African relations.

“The projects do not mean Egypt wants in return support from these African countries on specific issues. Rather, they reflect the existing deep ties between Cairo and Africa,” he said.