Egypt and the Democratic Republic of the Congo agreed to partner in the field of electricity as part of Egypt’s plan to boost its presence in the African continent amid the stalled talks on the Grand Ethiopian Renaissance Dam crisis. 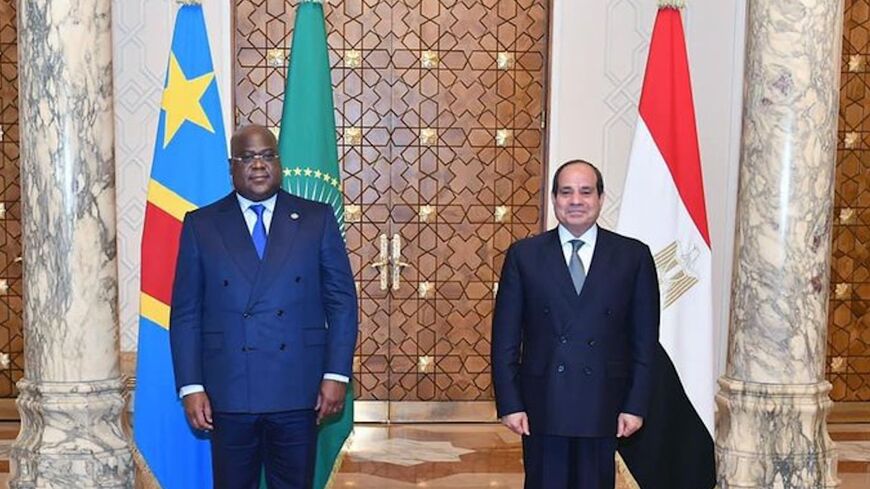 CAIRO — Egypt and the Democratic Republic of the Congo (DRC) have reached a partnership agreement in the field of electricity, in light of the continuing crisis with Ethiopia over the Grand Ethiopian Renaissance Dam (GERD).

EMG head Imad el-Sewedy said in press statements following the signing ceremony that the agreement with the National Society of Electricity to export and transfer Egyptian expertise to help operate the smart electricity meter system spans over 10 years and is subject to renewal.

He stressed that the agreement represents the beginning of the industrial partnership between Egypt and the DRC in the field of electricity.

He further indicated that the two countries will cooperate more in the fields of gas and water in the coming period as part of EMG’s effort to expand its investments in several African countries.

Experts and observers who spoke to Al-Monitor welcomed the agreement and considered it a token of continuity for Egypt’s policies to be effectively present in Africa.

Former Egyptian Assistant Minister of Foreign Affairs Mona Omar believes that the Egypt-DRC memorandum of understanding to partner in the electricity sector will strengthen Egypt's influence and presence in Africa.

“It [the deal] is an important element which the Egyptian state is interested in and focused on through expanding and establishing development projects in various African countries, notably the Nile Basin countries. Cairo has never been late in providing its expertise and technical capabilities to support the needs of the African continent, especially in the fields of electricity, energy, water and health. There is also great interest in preparing technical cadres at a high level to manage projects in African countries,” Omar told Al-Monitor.

She added that Egyptian companies such as EMG and The Arab Contractors have a long-standing history with leading large projects and have a wide presence in Africa, and they have huge investments in many countries. They represent Egypt's soft power for effective influence and a strong presence within the continent, thus contributing to securing its national interests, she continued.

Omar believes that large Egyptian projects in Africa, mainly in the Nile Basin countries, in the fields of electricity, water resources, irrigation and health — which are implemented through establishing hospitals and sending medical convoys — help boost Egypt’s influence in the African continent by winning the trust of African citizens, gaining their approval and tightening their bond with Egypt.

Speaking at the signing ceremony in Kinshasa on June 9, Egyptian Minister of Trade and Industry Gamea said that the agreement comes within the framework of Egypt’s inclination to increase economic, commercial, industrial and investment cooperation with African countries within the framework of the African Continental Free Trade Area that was activated in 2021. It also supports Egyptian-African cooperation to increase Egyptian exports to African markets as well as strengthen the Egyptian presence in these countries, she added.

Gamea further pointed to the Ministry of Trade and Industry’s keenness to achieve industrial integration and support the industrial development system in Africa, through the localization of industrial projects in African countries and the transfer of Egyptian industrial expertise and technologies, in cooperation with the private sector in Egypt and these countries.

She also noted that the agreement reflects the Egyptian state's interest in East African countries, within the framework of Egypt’s current presidency of the East and Southern African Community. “The Egyptian government is currently deploying huge efforts to facilitate Egyptian exportation to African markets. These efforts include improving the transport and logistic storage system and supporting shipment cost to African countries, in addition to activating the role of commercial offices in these countries,” she explained.

Abdel Moneim Said, a member of the Senate (Egypt’s upper house of parliament) and former head of Al-Ahram Center for Political and Strategic Studies, said that the Egyptian-Congolese partnership in the field of electricity is a good thing and an important step in strengthening the effective Egyptian presence in Africa, especially in the Nile Basin countries, to preserve Egypt’s national interests and strong influence within the continent.

Said told Al-Monitor over the phone that under the current regime, Egypt is seeking an effective presence in Africa by establishing development projects and providing all means of support and expertise necessary for the continent.

He believes that the Egyptian-Congolese agreement in the field of electricity strengthens the Egyptian position in the GERD crisis and helps it explain its point of view to African countries to preserve its national interests and cement its presence in Africa.

Said said that Egypt has great experience in the field of electricity and renewable energy as well as in water projects. Consequently, African countries trust it, thus benefiting Cairo economically, politically and commercially, and granting it the confidence of African citizens, he added.

Egyptian Minister of Electricity and Renewable Energy Shaker confirmed in press statements on the sidelines of the signing ceremony of the agreement that his country seeks to bolster cooperation and partnership with Africa in the fields of electricity and energy and benefit from the available natural resources in Africa.

He stressed the importance of the agreement in boosting cooperation between Egypt and the DRC to transfer Egyptian expertise in manufacturing smart electric meters and electrical connections and organizing training workshops for high-level Congolese cadres. He said that Egypt looks forward to more cooperation with Africa in terms of electrical linkages.