Egyptian President Abdel Fattah al-Sisi is preparing to take over leadership of the African Union for 2019 with an ambitious set of goals and programs. 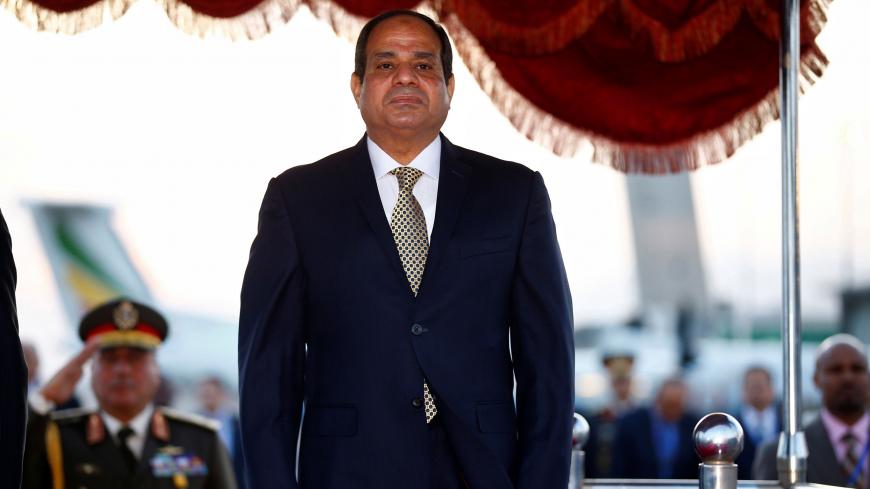 Egypt's President Abdel Fattah al-Sisi arrives at the Bole International Airport ahead of the 28th Ordinary Session of the Assembly of the Heads of State and the Government of the African Union in Addis Ababa, Ethiopia, Jan. 29, 2017. - REUTERS/Tiksa Negeri

CAIRO — Egypt is ready to assume the African Union presidency for 2019 and is stepping up preparations for the group's Jan. 31 summit.

Egyptian President Abdel Fattah al-Sisi will preside as chairman of the summit in Addis Ababa, Ethiopia. Sisi was elected by the AU Assembly of Heads of State and Government for a one-year term, succeeding Rwandan President Paul Kagame.

In a weekly cabinet meeting Nov. 13, Egyptian Prime Minister Mustafa Madbouly instructed all ministries to prepare cooperation programs with the other African countries, noting that the AU presidency is a golden opportunity to strengthen Egypt's interests and standing in Africa.

On Nov. 8, the government published an action plan to promote relations with African countries. It includes a number of bilateral and regional cooperation programs in health, trade, investment, aviation and culture. Egypt will also host numerous pan-African events such as the Africa Investment Forum, in addition to several cultural festivals.

Two weeks ago, Egypt’s Ministry of Youth and Sports established Africa Summer School 2063, an educational camp for youth leaders that is part of a 50-year plan to transform the continent through growth and development. It's intended to develop routes “to turn the aspirations of the African Agenda 2063 and Egypt Vision 2030 into projects on the ground," Hassan Ghazali, founder of the ministry's African Youth Bureau and vice president of the Pan African Youth Union, told Al-Monitor.

“Training youth leaders through this school will focus on supporting strategic relations with Africa. It will also support regional aspirations to fight terrorism and end armed conflicts on the continent," he added. “The government is now strongly inclined toward African rapprochement. Relations with Africa, in general, have become a priority on the agenda of the presidency and the various state institutions. The objective is not to create a new Egyptian role in Africa, but to revive Egypt’s historic role.”

Egypt’s AU presidency comes as its influence is waning among other North African countries such as Libya and Tunisia, which have seemed preoccupied with repercussions of their internal Arab Springs. New African leaders have emerged from southern and eastern Africa, most notably Rwanda's Kagame, the outgoing AU president who was entrusted in 2016 with reforming the AU Commission and achieving financial independence.

Ethiopian Prime Minister Abiy Ahmed also has been promoting ties with African countries. Ethiopia signed a peace deal with Eritrea and has been warming up to Somalia, Djibouti and Sudan. The leaders of Ethiopia, Somalia and Eritrea signed a comprehensive cooperation agreement in September and talks are underway to include Djibouti and Sudan.

These developments show that several African actors are now controlling the balance of power and influencing the decision-making process in Africa. Egypt has to find its own influence on several African issues.

“No specific African country has control over Africa or solely and unilaterally controls Africa's decision-making process." Hajjaj said. "In light of the different regional balances of power and their impact on the African landscape, the Egyptian policy must focus on cooperation and consensus to reach collective decisions. The various issues raised within the AU should be solved without the AU giving preference or supremacy to the interests and visions of a specific region.”

Egypt’s foreign policy toward the rest of Africa is based on promoting economic and development partnerships and on tapping the continent's market potential. But other factors also affect Egypt’s Africa policy, including current security threats against the Egyptian state, international and regional agendas in the Middle East and the Red Sea area, g and the implications of the upstream Nile countries’ individual actions and their impact on the Egyptian water quota. Egypt's per capita water share has dropped well below the international standard of 1,000 cubic meters per capita per year.

“The main challenge for Egypt is its conflicts of interest with international powers,” said Amani al-Tawil at Al-Ahram Center for Political and Strategic Studies. “This appeared in the diverging opinions between Egypt and France regarding the security threats of terrorist groups and local militias in the Sahel and Sahara.”

She pointed out, “The alliance of Mali, Niger, Mauritania, Burkina Faso and Chad emerged as an alternative to the joint defense system adopted by Egypt at the Sharm el-Sheikh meeting of African defense ministers in March 2016.”

Tawil went on, “Some African countries are seeking to form regional alliances. Ethiopia has ambitions to create a regional interaction with Eritrea, Somalia and Djibouti on one hand, and with eastern Africa in the Nile Basin on the other. This could be another challenge for Egypt, which must set forth serious visions to deal with these developments in the African arena.”

She said the government's initiatives to strengthen cooperation with the rest of Africa might not result in major changes for several reasons. “Most of Egypt’s ministerial portfolios have a limited funding capacity to implement development projects or offer grants. It is worth recalling that the African ministerial committee formed by former Prime Minister Ibrahim Mahlab in April 2015 was a failure.”

Tawil added, “The central issue where Egypt can play a strong role during its upcoming chairmanship of the AU summit consists of finding solutions to ensure the AU’s financial independence and self-financing. This has been the focal point of the reform process currently underway. African countries have yet to reach a consensus on this point. The AU will only be able to efficiently deal with the various thorny issues … when the AU gains financial independence and distances itself from the positions of powerful donor nations.”

During the extraordinary summit held Nov. 17, the AU reached decisions on financial reform and reduced the number of the group's commissions. The AU also imposed sanctions on member states failing to pay their statutory financial contributions. Sanctioned members will be deprived of the right to speak at AU meetings, to vote and to present candidates for AU posts.

Egypt’s AU presidency presents a new challenge for Sisi against the background of a number of initiatives aimed to support and strengthen Egyptian-African cooperation at the bilateral level. Since assuming Egypt's presidency in 2014, Sisi has been warming up to several African countries, especially those in the Nile Basin.