The United Arab Emirates is seeking profits by investing $2 billion in Egyptian state-held stakes in some companies. 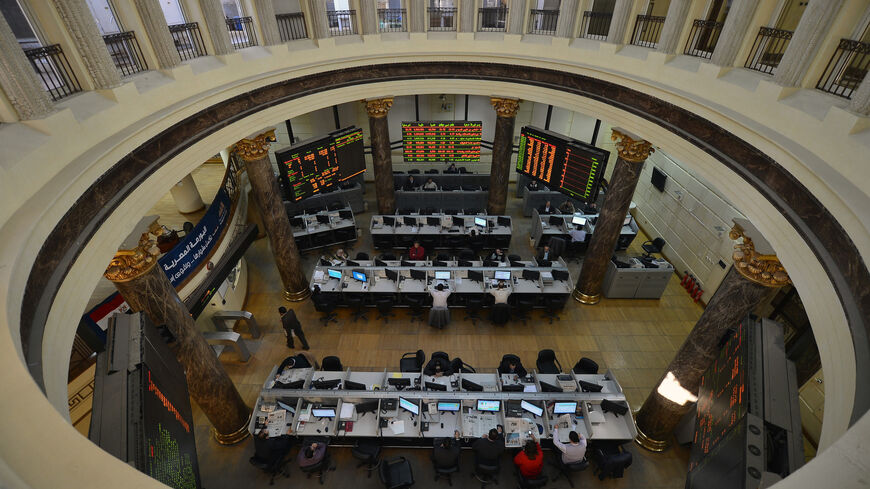 A general view of the Egyptian Stock Market in the capital, Cairo, on Jan. 6, 2013. - KHALED DESOUKI/AFP via Getty Images

In this context, economic researcher Sayed Khodr told Al-Monitor via phone that the acquisition deal would revitalize the Egyptian economy, especially the Egyptian stock exchange.

He said that this acquisition represents a huge financing deal welcomed by Egypt, whose economy — affected by several global crises, most notably the repercussions of the coronavirus pandemic and the economic implications of the Russian-Ukrainian war — is under great pressure.

Khodr pointed out that any investment in Egypt is a confirmation of the local market's attractiveness, explaining that the deal has a significant positive impact. “This deal pumped into the state treasury around $2 billion and reanimated EGX,” he said. “The share price of Fawry company jumped by 11%, while the share of Commercial International Bank increased by 6.3%. This reflected positively on EGX.”

He added, “The United Arab Emirates (UAE) is known to be one of the biggest supporters of Egypt. The two states launched in November 2019 a $20 billion joint strategic platform to invest in a range of sectors and assets.”

Khodr noted the rise in global inflation due to the Russian-Ukrainian war, which prompted most central banks to raise interest rates on deposits to control large waves of inflation. “Egypt has been seeing its foreign reserves shrinking, which prompted the government to consider boosting investments to revive the economy and compensate for the deficit,” he explained.

He continued, “Global economic crises have left their marks on the Egyptian economy, but the recent deal with the UAE has replenished the state's treasury. This is in addition to another $5 billion deposit from Saudi Arabia and a pledge by Qatar to pump $5 billion in investments in Egypt.”

On March 29, Egypt and Qatar signed investment deals worth $5 billion, according to an official statement issued by the Egyptian Cabinet. On March 30, Saudi Arabia announced the deposit of $5 billion with the Central Bank of Egypt after Egypt's cash reserve dropped to $37 billion.

Economic researcher Mohamed Nagm explained that Egypt’s reserves registered a $4 billion decline in March amid the repercussions of the Ukrainian crisis. “The state used this amount to cover the market’s needs of dollars, debt costs, the exit of some foreign investments and the costs of purchasing wheat and other commodities,” he told Al-Monitor.

Negm added, “Egypt is facing a major wheat crisis since it annually imports huge quantities from Russia and Ukraine. The war catapulted prices of wheat by an additional 44%, which weakened the current state’s budget and increased the value of its deficit.”

“In light of the current global economic system, the economic issues are deeply intertwined. The [world] central banks’ decisions to raise interest rates are closely linked to the energy crisis between Russia and Europe. Also, the wheat import crisis in Egypt is linked to the Egyptian pound depreciation, which increases the cost of import in general,” he said.

He explained that the increase in the budget deficit in Egypt and the decline in some investments in the stock market prompted the Egyptian government to consider operations aimed at revitalizing the capital market in Egypt. The recent acquisition of shares in the five major Egyptian companies falls into this context.

Abdel Khalek Farouk, an economist and the director of the Nile Center for Economic and Strategic Studies, told Al-Monitor that the UAE is making these investments based on economic feasibility studies. “This deal is not only aimed to support Egypt or pump $2 billion to finance its foreign exchange deficit, but it also aligns with the UAE’s goals to reap profits.”

He argued, “The UAE is well aware that the recent deal is profitable and falls in its favor. The investments were made in successful companies that achieve good profits, and the Egyptian shares have one of the cheapest prices in the world. Moreover, the five Egyptian companies represent promising sectors in Egypt with high profitability rates.”

He noted that First Abu Dhabi Bank withdrew its offer for a controlling stake in Egyptian investment bank EFG Hermes, citing ongoing global market uncertainty. This happened on April 14, just two days after the shares in the five companies were acquired, he added.

“The pullout came after ‘careful consideration’ according to a statement by the bank. The move pulled down the share price of EFG Hermes by more than 20%. This shows that UAE deals are driven mainly by profitability and not just to support Egypt,” Farouk said.