As Qatari money flows back into Egypt, the question now is how these potentially game-changing foreign investments will be directed. 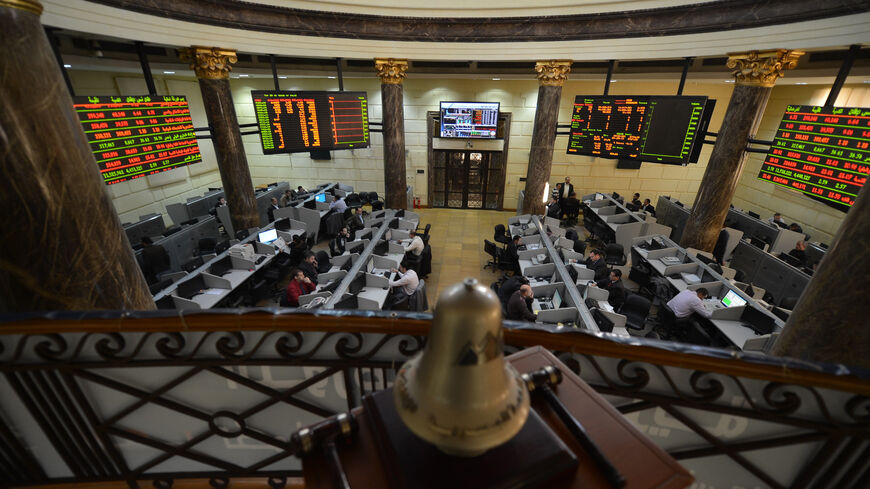 A general view of the Egyptian Stock Market in the capital Cairo is pictured Jan. 6, 2013. - KHALED DESOUKI/AFP via Getty Images

CAIRO — The Egyptian government has been holding meetings to discuss directing foreign investments, especially from the Gulf. Despite the likely relief brought by the return of Qatari investments to the Egyptian market, it remains unclear where they will be directed and how these funds will alleviate pressure on the economy.

On April 14, Egyptian Prime Minister Mostafa Madbouly met with a committee of ministers to review the plans of Egypt's Sovereign Fund and the program of offerings for public and government companies on the stock exchange in the interest of attracting more foreign investments.

Less than two weeks ago, on March 29, Cairo and Doha signed a series of deals for Qatar to make $5 billion in investments in Egypt.

In December 2017, Egypt froze all Qatari funds and investments in the country in line with a boycott led by Saudi Arabia. Cairo severed diplomatic relations with Doha, accusing Qatar of supporting terrorism and interfering in Egyptian domestic affairs at home. The government confiscated land from Qatari companies, notably the Qatari Diar real estate company, and terminated their projects.

An Egyptian government official familiar with the Egyptian-Qatari cooperation efforts told Al-Monitor on condition of anonymity, “Qatar made several guarantees" to "build trust and launch a new phase of cooperation in order to achieve the interests of both parties without hostility such as Al Jazeera's negative coverage of Egyptian affairs.”

“Egypt now has many major development projects that attract the interest of Qatari investors, especially in the real estate and tourism sectors,” the source said, adding, “Arrangements are underway for the possibility of holding an Egyptian-Qatari summit,” he said.

With the resumption of relations between the two countries in January 2021, Egyptian President Abdel Fattah al-Sisi met with Qatar’s Emir Sheikh Tamim bin Hamad al-Thani twice in August 2021 and later in February of this year in Baghdad and Beijing, respectively. On June 23, 2021, Sisi appointed a representative to Qatar empowered to sign agreements in the name of the state.

Maj. Gen. Mahmoud Mansour, formerly of the Qatari intelligence service, told Al-Monitor, “Egypt's foreign policy toward Qatar since Sisi took office was built on the protection of Egyptian and Arab national security strategy. Therefore, any decisions toward Qatar stems from the principle of protecting the security of Egypt and the Arab region from any hostile policies or actions.”

Mansour said, “The cooperation developments between the two countries reflect the change in Qatar's policy and its understanding of the dangers that surround the Arab region and the importance of returning to the Arab fold … despite some political and diplomatic disagreements on some regional and international issues.”

“Both countries must put the past aside and expand the framework of cooperation, especially since Egypt now has a large market and offers opportunities for Qatari investors,” Mansour said.

The Egyptian economy is suffering from additional burdens brought on by the Russian-Ukrainian war. The value of the Egyptian pound has fallen against the dollar and Egypt's foreign reserves have dwindled. Egypt's total sovereign debt is expected to reach $391.8 billion by the end of this year.

Economic journalist Mansour Kamel told Al-Monitor, “We should wait and see where Qatari investments will go to assess their viability and impact on the Egyptian economy. They may be positive if they are directed toward the industrial, production and technological sectors, as Egypt is still in dire need of foreign investment in these sectors.”

“If the Qatari investments are used to purchase existing assets, as rumored, they will not bring a great benefit to the Egyptian economy, as nothing will change but the ownership of existing companies ... unless these deals are followed by expansion and new investment,” Kamel explained.

On April 12, ADQ Holding, one of Abu Dhabi’s sovereign funds, acquired stakes in five companies listed on the Egyptian stock exchange, including state-owned companies such as Alexandria Container and Cargo Handling and Abu Qir Fertilizers and Chemicals Industries Company, at a cost of more than $28.5 billion.

Kamel said, “Qatar's investments cannot be considered as a support for the economy. Investment is always looking for profit, unlike other forms of support such as low-interest loans or foreign exchange deposits and grants.”

He explained, “The Egyptian market is now attractive to Qatari investors, especially with the provision of the Egyptian government's infrastructure for road and port networks and the development of investment laws.”

The announcement of Qatari investments comes as Egypt receives financial and economic support from other Gulf countries. Saudi Arabia announced on March 30 the deposit of $5 billion with the Central Bank of Egypt, bringing the total Saudi deposits in Egypt to $10.3 billion.

On March 21, ADQ Holding signed an agreement with the Egyptian government for investments amounting to $2 billion in exchange for government-held stakes in financial and industrial institutions, deals reminiscent of Gulf support for the Egyptian economy in the wake of the 2013 revolution.