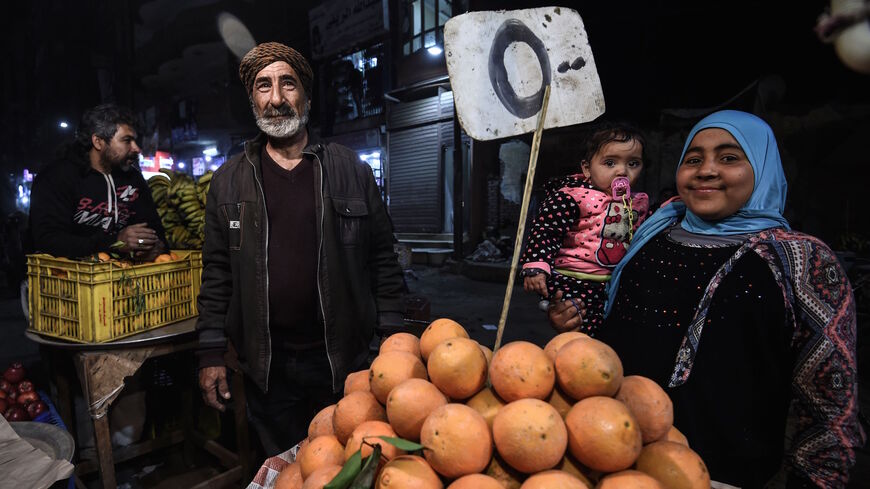 Egyptians smile for a photo as they buy fruits from a street vendor at a market in Menufiya province north of Cairo, Egypt, Feb. 22, 2018. - Mohamed el-Shahed/AFP via Getty Images

The Abu Dhabi Developmental Holding, a sovereign wealth fund based in the capital of the United Arab Emirates (UAE), announced March 23 its intention to invest $2 billion in Egypt through the purchase of stakes in a number of state-owned companies, Asharq Business reported. Approximately half of this amount, the news site noted, will be used to acquire about 18% of Commercial International Bank, while the remainder will be invested in companies in sectors such as fertilizers and port services.

Just a week later, on March 29, Qatar announced an agreement to place another $5 billion “in the coming period” in a series of investments and partnerships in Egypt, according to a statement from the Egyptian government. To implement the agreement, the two parties agreed to establish a joint higher committee led by their foreign ministers. And as Egypt’s Minister of Planning Hala Elsaid told Bloomberg, the Qatar Investment Authority, the country’s sovereign wealth fund, will hold the proposed investments.

One day later, it was the turn of Saudi Arabia. On March 30, Riyadh announced that it had deposited $5 billion in the Central Bank of Egypt, the Saudi Press Agency reported. And on the same day, Egyptian Prime Minister Mustafa Madbouly announced that in the coming period Egypt expects to attract up to $10 billion in investments from Saudi Arabia after witnessing the signing of an agreement to facilitate the Saudi Public Investment Fund activities in Egypt, according to a Cabinet statement.

The pledge of some $22 billion from Gulf states announced in a matter of days comes at a time when Egypt is experiencing a deep financial crisis that the Russian invasion of Ukraine and the ongoing global economic uncertainty has only helped to accelerate. In this context, the assistance from the Gulf is expected to at least neutralize for now some of its more urgent imbalances and vulnerabilities, albeit at a considerable price.

“The new announcements of support are [substantial] in the context of Egypt’s external financing needs, Central Bank of Egypt reserves and past support,” Krisjanis Krustins, director of Sovereigns at Fitch Ratings, told Al-Monitor. “Besides shoring up investor confidence, [Gulf] support will directly inject foreign exchange into Egypt’s economy and financial system, reducing the need for borrowing on the international markets.”

The Gulf countries have for decades played an important role in Egypt’s economy. But it was above all after the seizure of power by the current President Abdel Fattah al-Sisi in 2013 that its financial assistance — consisting of billions of dollars primarily aimed at shoring up an allied government — entered a new dimension. The weight of this support diminished following the 2016 agreement between Egypt and the International Monetary Fund (IMF), which included a $12 billion loan subject to a program of reforms, and the entry of bond investors. In 2020, after the outbreak of the coronavirus pandemic, Cairo also had to turn to the IMF to deal with the economic shock, securing two more loans.

Yet despite all this assistance, Egypt has not been able to fully turn its economy around and it remains deeply vulnerable to external shocks. Even before the Russian invasion of Ukraine, Egypt was suffering from a worrying capital flight widely attributed to a volatile global economic situation. According to a recent report by Fitch Ratings, between September and December 2021, $5 billion left the country. Since the onset of the war, hundreds of millions of dollars more have left its treasury markets as investors flee for safer markets, Reuters has reported. And the early maturity of a substantial portion of its debt adds to Egypt’s imminent funding needs, Fitch Ratings has noted.

The conflict in Eastern Europe has also dealt a severe blow to Egypt’s tourism sector, which represents another of its key sources of foreign currency, and it has further driven up prices of basic commodities, such as wheat and oil, on whose imports the country is heavily dependent. Egypt’s deficit is also set to remain high this year. And the central bank stated April 7 that its net international reserves dropped to $37 billion in March compared to almost $41 billion by the end of February, the lowest point registered since mid-2020.

The announcements of financial support came after Sisi’s tour of several Gulf states in the first months of the year. The Egyptian president first visited the UAE, where he met the country’s ruler Mohammed bin Zayed Al Nahyan and King of Bahrain Hamad bin Isa Al Khalifa. In February, Sisi went to Kuwait. And in March, he traveled to Saudi Arabia and hosted Al Nahyan in the Egyptian city of Sharm el-Sheikh. According to the independent Egyptian online publication Mada Masr, citing official sources, the tour’s goal was to secure direct financial cooperation agreements, particularly from Riyadh.

“[Gulf] states have provided significant support to Egypt in the past, including $15 billion remaining in deposits at the Central Bank of Egypt before the Ukraine war. Further support was always a possibility, especially at a time when the oil price windfall significantly eases budget strains in the [Gulf] itself,” Krustins noted.

Yet the assistance offered now by the Gulf is different from that provided between 2013 and 2016. “The 2013-2016 aid was a mix of grants, in the form of fuel, and deposits, roughly $15 billion each. This time, so far, we have $5 billion in deposits and $17 billion in investment pledges,” David Butter, an analyst who has recently published a study on the relations between Egypt and the Gulf, told Al-Monitor.

“It feels there has been a shift. Now [the support] is more toward investment. So it’s quite long-term thinking. It’s [more about] how to support the private sector. It’s not just supporting a government. That’s quite an important change,” Robertson noted.

Cairo’s ability to secure financial assistance from its allies in the Gulf is also regarded as a possible IMF condition for agreeing to a new loan to Egypt. At the end of March, the financial institution announced in a short statement that the Egyptian authorities have officially requested its support to implement a comprehensive economic program.

The veiled bailout from the Gulf and a potential new IMF loan, however, has also given rise to criticism among those who consider that Cairo has not made the necessary economic reforms in recent years so as not to rely on further assistance.

“Egypt’s government has attempted to suggest that the reason it finds itself once again in economic difficulty is strictly due to external shocks beyond its control. While these external shocks undoubtedly increased Egypt’s challenges, there is no denying that poor governance and economic mismanagement contributed significantly to Egypt’s economic vulnerability,” Timothy Kaldas, policy fellow at the Tahrir Institute for Middle East Policy, said. He told Al-Monitor, “There's no denying that the pandemic and war made things harder for Egypt, but poor decision-making by Egypt’s government made the country far more vulnerable to these external shocks.”

Despite such criticism, Egypt has received consistent praise from the IMF for its "resilience" and commitment to macroeconomic stability, structural reforms and new safety protections during the coronavirus pandemic. Egypt was one for the few economies in the world that sustained positive GDP growth — of 2.8% — during the pandemic.

The Gulf pledges have also generated unease due to the economic and political implications they may entail. Economically, Cairo has taken significant steps in recent weeks to pave the way for the arrival of this assistance. In addition to the various bilateral agreements signed with the Gulf countries, the central bank raised interest rates in early March and devalued the pound. This last measure was especially applauded by the IMF, which also hinted in its statement that any further assistance would be conditional on its usual austerity recipe.

Kaldas also noted that Egypt will have to pay a considerable price for Gulf assistance. “Most funds from the Gulf this time around are coming in the form of investments. This means the Gulf backers of the Egyptian government are pledging money in exchange for Egyptian state assets. They aren’t just handing out cash assistance and low interest loans like before. They expect to profit from their aid to Egypt this time,” he added.

On March 30, for instance, Abu Dhabi Ports Group, one of the region’s largest logistics and transportation companies, announced the signing of an initial agreement with Egypt to manage the operations of the Red Sea port of Ain Sokhna and to manage and operate a river port in Minya governorate, it said in a statement.

Politically, assistance from the Gulf has also been widely interpreted as trying to prevent Egypt’s economic challenges from turning into political pressure. But more critically, aid from the UAE and Saudi Arabia could also be subject to greater support from Cairo for a new regional security scheme primarily designed to confront Iran. At the end of March, Mada Masr reported that Cairo remains quite skeptical to further tie its foreign policy to its powerful Gulf allies, but that the country remains under strong economic dependence.