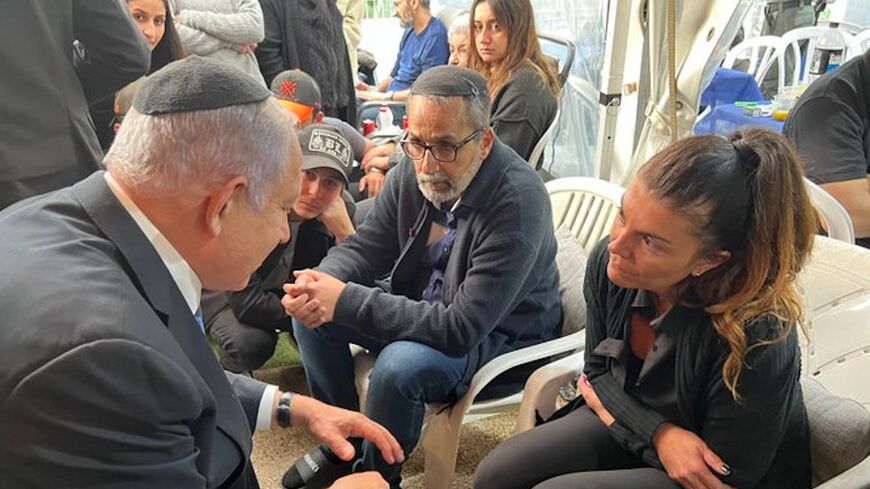 Benjamin Netanyahu visits on March 31, 2022, the parents of Border Police officer Shirel Aboukrat who was killed in a terrorist attack. - Twitter

Opposition head Benjamin Netanyahu’s agenda March 31 left no room for doubt: The former prime minister is leading a campaign in which he claims that the Change Government is not capable of dealing with the new terror wave.

The terror attacks in Beersheba (March 22), Hadera (March 27) and Bnei Brak (March 29) had a strong effect on the Israeli public. The sight of the wounded and dead victims who were murdered near their homes on an ordinary day served to bring back the collective trauma of the second intifada in the early 2000s. Many people started to look into the option of buying weapons and security was beefed up around the schools. In short, “fear” returned to the streets.

Netanyahu used this atmosphere as a kind of political weapon against the Change Government leadership. He must have known that he might be criticized for cynically using the violence as a tool to frighten the public, yet he took his chances and went out to the street to make appearances. The former prime minister is an expert in turning a situation to his political benefit.

Back to March 31: Netanyahu began the afternoon with a video he filmed starring Likud legislator Avi Dichter at his side — the same Dichter who served as head of the Shin Bet during the second intifada. With a stern face, Netanyahu announced, “We must restore security and peace and quiet to Israel’s citizens. The way to do this is to operate very severely against terror. The Likud party will advance the bill proposed by Knesset member and former Shin Bet head Avi Dichter to revoke the citizenship of terrorists who are Israeli citizens, who receive salaries from the Palestinian Authority.”

After the video was filmed and then disseminated, Netanyahu continued to his next stop — a consolation visit to the parents of Border Police officer Shirel Aboukrat, an immigrant from France who was only 19 at her death. She was killed in a terror attack in the middle of Hadera on Sunday. Netanyahu sat with her parents and tried to encourage them. After the visit, Netanyahu posted on social media a picture of himself in their house.

From there the opposition head paid another condolence call, this time to the parents of Police motorcyclist Amir Houri, a Christian Arab who neutralized a terrorist in Bnei Brak and paid for it with his own life. Netanyahu sat with Houri’s father Jerris, a retired police officer himself. Again, Netanyahu repeated his ritual and disseminated his picture inside Jerris' house on social media.

Netanyahu continued his “consolation voyage” beyond the weekend. Last Sunday, the former premier used the networks to report that he went to Kasra-Samia “to visit the mourning family of Magav fighter Falach who was murdered in a terror attack in Hadera. I came to embrace the family and salute their warriors who contribute to Israel’s security; this family raised a hero who paid with his own life to save the lives of others. May the memory of Yazan Baruck be for a blessing; may we remember him forever.”

In fact, Netanyahu started his field campaign of “Mister Terror” on March 30. The former premier visited the families of the victims in Bnei Brak, Avishai David Yechezkel and Yaakov Shalom. The former prime minister is a popular figure in Bnei Brak, the largest ultra-Orthodox city in Israel. Thus, he received a warm welcome accompanied by cries against the government. When he left Yechezkel’s house, Netanyahu spoke to the media and said, “We must bring back peace and security for Israeli citizens in the streets of our cities. This can be done. It must be done. A determined hand and very decisive actions are required. Unfortunately, we all see that a government which depends on the Islamic movement is not doing that and probably is unable to do that.”

This is the third time in which Netanyahu serves as head of the opposition, and like in the past, the war against terror is at the heart of his campaign. In 1996, he competed against late President Shimon Peres during the period of massive terror attacks after the Oslo Accords. Netanyahu would go to scenes where terror attacks took place and deliver his combative statements there. In 2006 and in 2009, Netanyahu led campaigns in which he promised to “knock down Hamas in Gaza.”

Now at age 72, Netanyahu faces a criminal trial. Yet like the phoenix, he continues to reinvent himself on the background of terror attacks. Evidently, he believes that he will, indeed, return to head the government. Opinion polls encourage him. They point to the strengthening of his position and give him first place in the premiership. His associates say he estimates that the Change Government will fall soon, even in the coming months. Thus, he repeats the same slogan: A government that is supported by the Islamic movement cannot fight terror.

Netanyahu intends on using this prop to the very end. His associates say he is planning visits to cities identified with the Likud — for example, Dimona in the south of Israel, which faces the threat of missiles from nearby Gaza. Netanyahu’s goal is simple: to convert the public’s fears and worries regarding Islamic movement terror to political energy.

No one in Israel can top Netanyahu regarding using the terror theme to garner votes. On the other hand, there is the chance that the current wave of terror will fade. The Bennett government, which depends on votes of the Arab party for the Knesset majority, may sail through the month of Ramadan without problems. Then Netanyahu might find himself blamed by the public for using scare tactics.

As aforementioned, it is very difficult to predict what the political dynamics will be over the coming months. But as far as Netanyahu is concerned, he has no intentions of waiting. He knows that terror attacks fragilize politically first and foremost Prime Minister Naftali Bennett and his colleagues from the right-wing Yamina party. And so he plans on pushing the right-wing members of the government to the very edge.