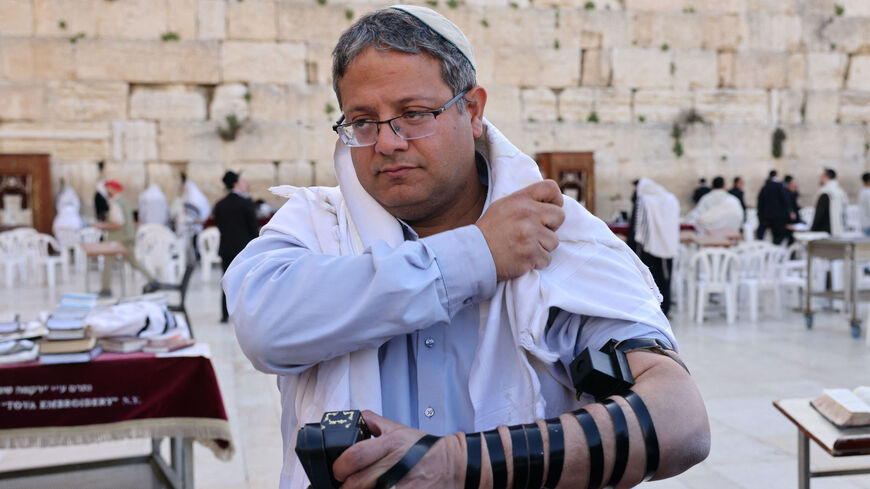 The Shin Bet was stunned to discover a series of advertisements in Friday's newspapers (April 29) attacking its director Ronen Bar. The ads were signed by the far-right Otzma Yehudit (Jewish Power) faction, headed by opposition Knesset member Itamar Ben Gvir.

The ads featured a photo of Bar, alongside an article about an official Shin Bet report concerning Ben Gvir. The Shin Bet report, apparently submitted about 10 days ago, warns that a march led by Ben Gvir to the Damascus Gate in the Old City of Jerusalem would play into the hands of Hamas and was likely to ignite the entire region. According to the Shin Bet report, “Ben Gvir’s arrival is a detonator, and a detonator must be defused.” As a result of the report, Prime Minister Naftali Bennett prevented Ben Gvir from visiting the area, given the unrest on April 20, during Ramadan.

After seeing the article, Ben Gvir decided to come out with all guns blazing. He used a series of newspaper ads to launch a media campaign against the head of the Shin Bet, making reference to recent terror attacks in Israeli cities. “You failed on the Temple Mount. You failed in Beersheba. You failed in Bnei Brak and Hadera. You failed in Gaza. So, now you’re accusing Itamar Ben Gvir, and saying that he needs to be 'defused'? Stop giving briefings. Get to work!” the ads said.

It is highly unusual for a member of Knesset to take such a step against the head of an official state organization, especially one with such prestige among the public. Until just a few years ago, it was forbidden to release even the name of the head of the Shin Bet in the media — it goes without saying that his photo was not allowed either. It was all part of an approach that said that senior officials of Israeli intelligence organizations should remain in the shadows. The public had no idea who the heads of the Shin Bet or Mossad were, but these two unnamed individuals were nevertheless held in respect and even awe. Since the new wave of terrorism began two months ago, the Shin Bet has been working around the clock, attempting to prevent more terrorist attacks. Under normal circumstances, when tensions are high, Israelis tend to show gratitude to their security forces.

The problem is that Ben Gvir is a political provocateur, and a very controversial one at that. He does not play according to the rules. According to Ben Gvir, the director of the Shin Bet has been inciting journalists against him in his briefings, and presenting him as an extremist. Ben Gvir explains this by saying that this is being done to distract journalists from the Shin Bet’s own failing, and especially, the failings of its director.

Bennett was quick to jump to Bar’s defense. He tweeted a sharp attack against Ben Gvir and against the leader of the Religious Zionist party, Bezalel Smotrich, who was, until recently, his partner in politics. As a reminder, the two parties — Religious Zionism and Otzma Yehudit — run on one ticket at the elections. Now, Bennett accused them of sowing chaos. “This dangerous campaign against the Shin Bet and its director is a cowardly act and anti-Israel. It is intended to ignite the country with the fire of zealotry and chaos,” he wrote.

Bennet continued, “Ronen Bar, director of the Shin Bet, is someone who has devoted his whole life, working day and night, to ensure that we can sleep soundly and safely. When the Jewish people spend time with their families on each holiday eve, and when they go on excursions on Saturday, he is on the red line. The responsibility that lies on his shoulders, and on the shoulders of all the Shin Bet’s warriors, is enormous.”

Smotrich’s Religious Zionist party also responded angrily, and accused the prime minister of inciting the public against them, saying, “Naftali Bennett continues to lie and divide the country at the same rate that he breathes. The chairman of the Religious Zionist party never once spoke out against Director of the Shin Bet Ronen Bar. He is full of admiration for the organization and its leader for their war against Islamic terrorism.”

This fight between Knesset members from the far right and their former partner — the prime minister — shows how deep the rift within the right has become since the current coalition was formed. It is a rift that expanded over the last few weeks in the wake of the recent wave of terror plaguing Israel. The right outside the coalition accuses Bennett of fanning the flames of terrorism because of his partnership with the Islamist Ra’am party. They say that Israeli Arabs are taking advantage of the government just like the Palestinians, and that the government is afraid to take steps against them — because without Ra’am, it would fall apart. These accusations have intensified recently, due to the violent riots on the Temple Mount during Ramadan prayers.

As a result, Bennett and his family have come under serious threats to their lives over the past few days. His wife and children were sent two threatening letters in envelopes containing live bullets. The letters demanded that Bennett resign immediately as prime minister.

The coalition accuses the leaders of the parties on the right of inciting the public against Bennett. Its targets include Ben Gvir, Smotrich, but also the head of the opposition, former Prime Minister Benjamin Netanyahu. It claims that the rhetoric they use stirs up hatred against Bennett, because they treat him as an illegitimate prime minister, who stole votes from the right to join forces with the left. In contrast, the leaders of the right claim that they are the victims of incitement, and that the accusations against them are intended to prevent them from offering legitimate criticism against the coalition and its leader.

In the case of Ben Gvir, he also seems to be threatened, because of his extremist positions. On May 1, he presented a series of threats to the lives of him and his family. One such letter included photos of guns and ammunition. Another threat, which was received on the night of April 30, included photos of Ben Gvir’s family at the beach. “We will kill you and your family,” it said. “We will take the lives of you and your children. We will put a bullet in your head.” The letters were submitted to the police for investigation.

There is no doubt that this is one of the most heated disputes — socially and politically — that Israel has ever seen. The sensitivities are high, because of the traumatic memory of Prime Minister Yitzhak Rabin’s murder by a right-wing assassin in 1995. The killer, Yigal Amir, opposed the Oslo Accord, advanced by Rabin and his government, and decided to stop them with a gun. Back then, too, the incitement against Rabin was especially severe.