Now that Prime Minister Benjamin Netanyahu has granted legitimacy to the Kahanist Otzma Yehudit, its members have not missed an opportunity to disseminate their racist ideology, including in the nation's schools and television stations. 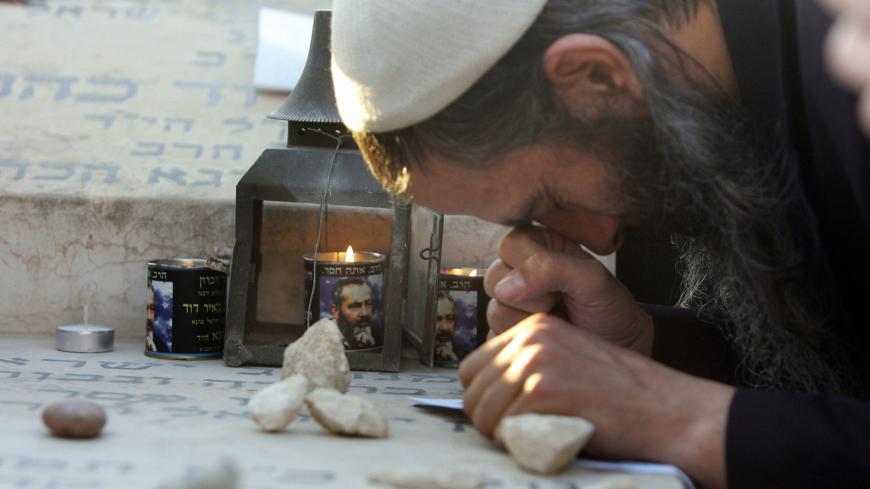 A follower of Rabbi Meir Kahane prays at his grave, with votive candles bearing his image, at the Givat Shaul cemetery, Jerusalem, Nov. 9, 2006. - MENAHEM KAHANA/AFP/Getty Images

Under the new moniker of Otzma Yehudit, the followers of Rabbi Meir Kahane are ostensibly no longer a bunch of wild weeds or a gang of fascist and racist thugs operating under the radar among their target audience. They are now at the forefront of a new Israeli discourse unlike anything the country has heard since the assassination of Prime Minister Yitzhak Rabin in 1995 or Baruch Goldstein’s massacre of Muslim worshippers the preceding year in Hebron. It was Prime Minister Benjamin Netanyahu who granted them this legitimacy, letting the genie out of the bottle with his own bare hands.

On Feb. 3, it was the Likud, not Netanyahu in name, who called on the parties on the right to join forces with Otzma Yehudit. Netanyahu was prudent about that — fearing general public reaction to the ultra-nationalistic group — but once the unification between the national-religious HaBayit HaYehudi and Otzma Yehudit was finalized, Netanyahu returned to his old ways. Even the harsh reaction by his longtime admirers in AIPAC, the American Israel Public Affairs Committee, has not deterred him.

Netanyahu went on the offensive, attacking the left and comparing Otzma Yehudit to the Arab parties in Israel. “Bringing the right-wing parties under a single roof is illegitimate, but taking steps to bring in agitators and spies acting against Israel is legitimate. That is the height of absurdity,” he claimed. The disciples of Kahane and admirers of the mass murderer Goldstein couldn’t have found themselves a better advocate and defender.

Meanwhile, Itamar Ben Gvir, an attorney and holder of the eighth slot on the Union of Right-Wing Parties list, has been appearing in television studios to disseminate his ideology. It should be remembered that days before Rabin was assassinated, Ben Gvir boasted that he had been able to steal the emblem from Rabin’s secure Cadillac. On the Kan network on Feb. 23 when asked on a politics show about the picture of Goldstein hanging in his home, Ben Gvir chose to play dumb, claiming that it is not because Goldstein murdered Arabs, but because he saved Jewish lives as a doctor.

What this means is that a disciple of Kahane, a man whose movement was outlawed in Israel and is still considered a terrorist organization in the United States, has launched a campaign to grant legitimacy to a Jewish terrorist who murdered 29 Muslim worshippers and injured 125 others in the Cave of the Patriarchs. Once Ben Gvir did this, journalists identified with the right felt that they had greater freedom to do the same. Thus, Maariv legal correspondent Avishai Greenzweig tweeted Feb. 25, “There is something that no one dares to say about the massacre committed by Baruch Goldstein in the Cave of the Patriarchs. What he did was a serious crime, but let’s remember that Hebron has been a hornet’s nest of terrorists for the past 100 years. The methodology of terrorism was invented by the Arabs of Hebron, who never once held back, as individuals and as a group, in their desires and attempts to destroy us. Goldstein responded to them in language that they understand.”

In response, Likud campaign organizer Avishai Ivri wrote, “He’s 100 percent right. What do you think? That he got up one morning and decided to kill Arabs? No, he lived under constant attack, with his life always at risk. Does the fact that he acted unacceptably change all that?”

In the opposing camp is Rabbi Benny Lau, a religious Zionist and nephew of former Chief Rabbi Yisrael Lau. He claims that Kahane’s Kach movement, whose legacy Otzma Yehudit carries, is saturated with racism akin to the Nazi’s Nuremberg Laws. Lau bases his argument on a comparison made by former Likud Knesset member Michael Eitan, who did, in fact, find that the legislation proposed by Kahane himself was remarkably similar to the Nuremberg Laws: “There were two legal systems dealing with the status of Jews and non-Jews, residential restrictions, bans on mixed marriages and extra-marital relations, the separation of students, prohibitions on social encounters between the two groups, separate beaches, etc.”

Yet Ben Gvir has not only been invited into the country’s television studios but into its schools as well. He participated in an election panel on Feb. 26 at the Sharett High School in Netanya. Events like this are a routine occurrence in high schools across Israel, but in this particular case, it almost blew up in everyone’s face when Labor Party candidate Emilie Moatti, who was also scheduled to be on the panel, walked out to protest Ben Gvir’s participation. Moatti stated, “I have no interest in being on a panel with a representative who participated in the incitement that led to Prime Minister Rabin’s assassination. I will not stay here, and I call on all of you to walk out too and refuse to listen to what he has to say.”

While attending a conference organized by the Israel Institute for Democracy at the Leyada School in Jerusalem, another Labor candidate, Knesset member Shelly Yachimovich, learned that Ben Gvir’s brother was in attendance. “I despise you, you racists!” she lashed out. “I feel deep scorn for you. Do you have any other brothers at home to send to other events like this? You’re a bunch of racists. You’re disgraceful! Shame on you! Any other country would have spat you out of the political system.”

Not only has the political system failed to spit them out, Netanyahu has opened the door for them and granted them legitimacy. For their part, they are acting just like Netanyahu by casting Arab Knesset members as enemies of Israel. After Knesset members from Meretz, Labor, and Yesh Atid asked the Central Election Committee to disqualify Otzma Yehudit’s candidates, Ben Gvir wrote to Knesset member Stav Shaffir, stating, “Ever since you sent that ridiculous letter [to the Central Election Committee], people haven’t stopped talking about us, and our campaign has gathered momentum. You did not ask to disqualify [Arab Knesset members] Zoabi and Tibi, two enemies of Israel, proving to everyone how hypocritical you are. Keep it up, Stav. Keep it up.”

Kahane’s disciples are, indeed, gaining momentum, especially when compared to how they were doing before Netanyahu granted them legitimacy. They have suddenly become the face of HaBayit HaYehudi. They are engaged in the political discourse. They are invited to election debates. They overshadow their peers on the far right, who are seemingly moderate compared to them. Established right-wing journalists Kalman Liebskind and Erel Segal, who have a daily show on Kan 11, have wondered aloud how Bezalel Smotrich has become “right lite.” Smotrich is the Knesset member who once said that his wife would be unwilling to share a room in a maternity ward with an Arab mother giving birth.

“If I were campaigning for HaBayit HaYehudi, I would come out with a billboard that said, ‘Only Smotrich can bring peace,’” Liebskind joked on their show. “Yet just two weeks ago he was the symbol of extremism.” Segal smiled and said, “In 20 years’ time, they’ll miss Ben Gvir just as much as they miss [moderate Likud Knesset member] Benny Begin today.”