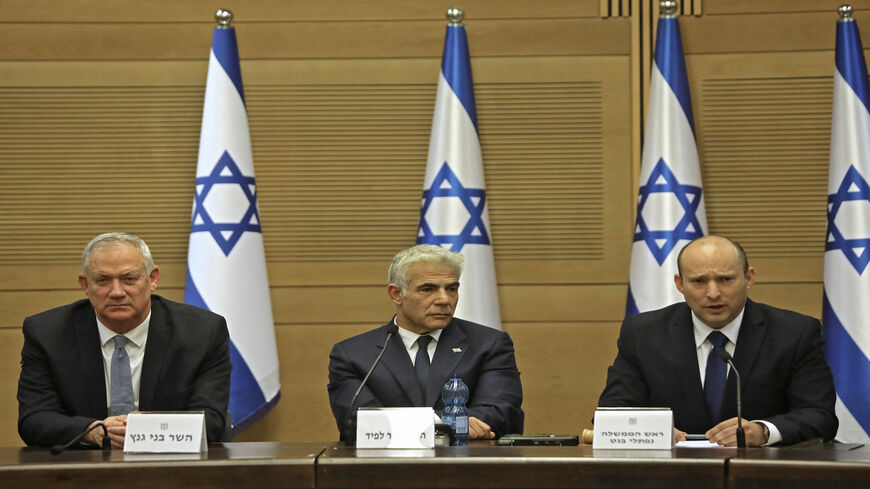 “I don’t know who tried to blow up the meeting with [Jordanian King] Abdullah and [Palestinian President] Mahmoud Abbas. I want to continue working on security affairs and the diplomatic aspects of those security affairs. Anyone who sends soldiers into battle must ensure that every diplomatic effort was made first.”

This was the first public response by Defense Minister Benny Gantz to recent reports that Prime Minister Naftali Bennett and Foreign Minister Yair Lapid went behind his back and spoke with regional leaders, in an alleged effort to thwart a conference in Ramallah that he was planning for this week. Gantz made his remarks in a primetime interview at 8 p.m. on Channel 12 News. He was effectively confirming the reports.

The conference that was subverted revealed more about the conflicts within Israel’s leadership between the prime minister, foreign minister and defense minister. It did away with any illusion of harmony in the highest echelons, which they try to present to the public. Each of the three men tries to stand out at the expense of the others, and to build up his own reputation as the central figure behind Israeli policy. Gantz has not given up his dream of one day being prime minister, Lapid is already revving up his engines in preparation for the day that he takes over from Bennett, and Bennett still wants to leave a mark. The result is a foreign policy that lacks any real cohesion.

The conference in Ramallah, which was ultimately torpedoed, is perhaps the most comprehensive example of this. According to reports, the defense minister’s office was able to organize a meeting in Ramallah with the Jordanian monarch and the Palestinian leader in order to lower tension during the Muslim holy month of Ramadan. Apparently, Gantz did this without coordinating with the offices of the prime minister’s office or foreign minister, while they were busy organizing the March 28-29 Negev summit. Foreign ministers from the United States, Egypt, Bahrain, Morocco and the United Arab Emirates all attended the conference, which was hosted by Lapid.

Apparently, Bennett only learned about Gantz’s diplomatic efforts during a visit to Egypt March 21-22. He immediately notified Lapid. Both men were surprised to learn of this initiative. As busy as he was with the Negev summit, the last thing Lapid needed was a parallel “summit” in Ramallah, which would shift the focus away from him. Bennett wasn’t happy about it either, to put it mildly. The last thing he wanted was another meeting between the defense minister and Abbas. It certainly wouldn’t help him with the few supporters he has left on the right, and it would help build Gantz’s reputation as a “statesman.”

Furthermore, both Bennett and Lapid already had more than their fill of Gantz, who is considered an outsider in the coalition. It is no secret that Gantz is bitter about not being prime minister, a position he reportedly believes should have been his. Not only is he not prime minister, but Lapid, his archnemesis, is expected to replace Bennett in that coveted office in a year and a half. As a result, Gantz, it seems, has decided to play the role of an independent-minded maverick ever since he first entered the government. He keeps his distance from Bennett and Lapid, highlights his experience in defense and diplomacy, and constantly reminds them that there would be no government without him.

As for the conference that Gantz tried to arrange, the circumstances that led to it being canceled are not at all clear. What is clear, is that Gantz was forced to shelve the idea and make due instead with a meeting with the Jordanian king in his palace in Amman. Lapid was able to take credit for the historic summit in the Negev Desert, but the March 27 terrorist attack in Beersheba overshadowed it and made it a secondary news item. It should be noted that while the crisis with Gantz was unfolding, Lapid’s office responded with only brief statements that relations between the foreign and defense ministers were good, and that they were cooperating fully.

But Gantz was not convinced. He was, in fact, furious about what Bennett and Lapid did, but he managed to maintain a collegial attitude on the outside at least. Today, April 1, he even congratulated Lapid for the Negev summit, writing on his Twitter account, “Forging stronger and deeper relations between the nations, together with our most important ally, the United States, is a strategic, security and economic asset.”

But this conciliatory tone did not last long. The defense minister broke his silence with the Channel 12 interview. Though he didn’t blame anyone or one factor specifically, he did not deny that the prime minister and the foreign minister were behind what happened.

This is not a healthy working relationship in a coalition that is dealing with a deadly wave of terrorism. The problem is that this incident was not some outlier. It was yet another example of the friction building up recently.

One such outburst occurred March 24 after Gantz announced that he would be flying to India March 29, just four days before Bennett’s planned visit there, to mark 30 years of military cooperation between India and Israel. His announcement said that he was planning to bring a military delegation with him.

Bennett’s office was taken by surprise. After all, he was scheduled to leave for India April 2, for a meeting with Indian Prime Minister Narendra Modi. People surrounding Bennett called Gantz’s behavior “childish.”

What eventually put an end to all this were the recent terrorist attacks and Bennett’s bout of the coronavirus. The defense minister announced that he would not be going to India in the end. The prime minister’s office followed suit immediately, announcing that the visit to India was canceled because the prime minister was in isolation.

But there is even more tension at the highest levels of government. This week it was learned that relations between the prime minister and the foreign minister are less than harmonious. Shortly after the March 29 attack in Bnei Brak, Bennett said, “Israel is facing a wave of murderous Arab terrorism.” About three hours after the attack, a special review of the security situation was convened over secure phone lines. Originally, the foreign minister was not supposed to participate, but he asked to join in. Lapid noted that the Americans do not look favorably on language like “Arab terrorism,” and that it is important to maintain a modicum of restraint. “The Americans condemn it, and the Palestinians will condemn it, too,” he said.

Bennett responded, “Condemnation is all well and good, but we need action. They should stop paying salaries to terrorists who kills Jews. I’ll get more excited over that than I will over condemnations.”

In this particular case, Lapid’s office lowered the tension by claiming that the remark was not directed at Bennett specifically, but that it was more general. Nevertheless, the series of recent events leave no room for doubt. There is very little harmony in the highest echelons of the coalition, and the cracks are beginning to show.