Cairo and Tel Aviv strengthen trade and economic cooperation and increase their export capacity under the protocol of the Qualified Industrial Zone. 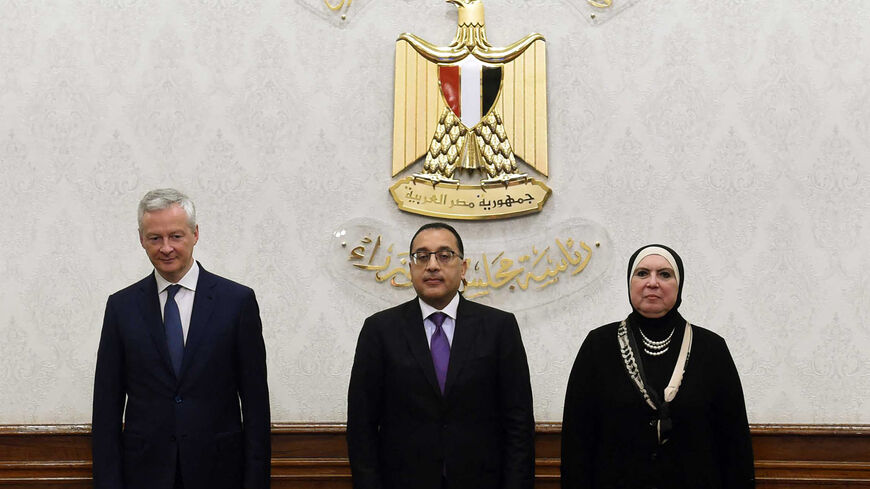 Egypt and Israel held talks March 31 to discuss ways of expanding their economic and trade relations, in the latest sign of warming ties between Cairo and Tel Aviv.

A statement by the Egyptian Ministry of Trade and Industry said talks between the two sides dwelt on ways of strengthening trade and economic cooperation under the Protocol of the Qualified Industrial Zone (QIZ) to increase export capacity in the coming period.

The discussions also targeted the activation of bilateral trade and investment capabilities to be reflected on boosting economic growth rates, including the optimal investment in the size and scope of the QIZ agreement.

Barbivai tweeted that she updated the service at the Nitzana border crossing for improving the transfer of goods through the terminal. She said the measures will help double bilateral trade between Israel and Egypt to around $700 million within three years.

Israel is working to “significantly facilitate the conduct of business to enable this," the Israeli Ministry of Economy said in a statement.

In 2021, bilateral trade between Egypt and Israel reached $330 million a year, an increase of 63% from 2020, according to Israeli figures.

Ehab al-Dosoki, a professor of economics at the Sadat Academy for Management Sciences, believes that Israel has an edge in the field of technology, which can serve the Egyptian export capacity.

“The QIZ program is a good field for cooperation between Egypt and Israel to help boost Egyptian exports,” Dosoki told Al-Monitor over the phone.

The QIZ Protocol was established by the US Congress in 1996 to build economic ties between Egypt and Israel. The program, which came into force in 2005, allows products jointly manufactured by Egypt and Israel duty-free entry into the United States, provided that Israeli components represent 11.7% of these products.

There are 1,124 companies registered under the QIZ protocol as of February 2022, the vast majority of which produce textiles (80%), while the remaining firms largely export processed agricultural products, chemicals, base metals, plastics, leather products and building materials.

Exports under the QIZ protocol hit $1.2 billion in 2021, with textile and clothing representing 94% of all of Egypt’s QIZ exports, while chemicals, minerals, fertilizers, glass and agricultural products account for the remaining 6%.

Dosoki opines that Egypt’s small production capacity hinders efforts to make the optimal use of the QIZ program with Israel.

“If the Egyptian authorities managed to expand the country’s production in the field of textile and clothing, Cairo will be able to make better results from the QIZ protocol, hence reflecting on increasing Egyptian exports to the US,” he added.

Egypt was the first Arab country to sign a peace treaty with Israel in 1979 after decades of conflict.

Relations between the two countries have significantly improved in different fields in recent years, with Israeli Prime Minister Naftali Bennett visiting Egypt in September 2021, the first such visit by an Israeli prime minister in a decade.

Bennett’s office said the three leaders discussed ties between the three countries and ways to strengthen their relations at all levels.

The Egyptian Presidency said the meeting dealt with the repercussions of global developments — an apparent reference to the Ukraine war — and their effect on energy, market stability and food security, as well as exchanging views on the latest developments on a number of international and regional issues.

Tarek Fahmi, a professor of political science at Cairo University, thinks that the current momentum in Egyptian-Israeli relations was triggered by the recent US-sponsored normalization deals between Israel and both the United Arab Emirates, Bahrain, Sudan and Morocco.

“Egypt and Israel seek to deliver a message through this cooperation that their relations are solid and are expanding,” he told Al-Monitor.

He continued, “Egypt is also playing a central role in maintaining calm between Israel and Palestinian groups in Gaza and in preventing any escalation in the Palestinian territories.”

While many Egyptians are not averse to trade with Israel, the Egyptian public is wary of deepening ties with the Jewish state until a just and durable peace with the Palestinians is achieved.

In September 2021, Egypt’s flag carrier EgyptAir announced that it would operate four direct flights weekly between Cairo and Tel Aviv for the first time in decades. And in March, both countries agreed to launch a direct flight route between Tel Aviv and Sharm el-Sheikh.

“This agreement will further warm the relations between Israel and Egypt,” Bennett said in a statement. He added that cooperation between the two countries “is expanding in many fields and this is contributing to both peoples and to regional stability.”