The visit to Egypt of the Israeli Firqat Alnoor Orchestra reflects a clear trend in the past year and a half of cultural, environmental and economic ties warming up between the two countries. 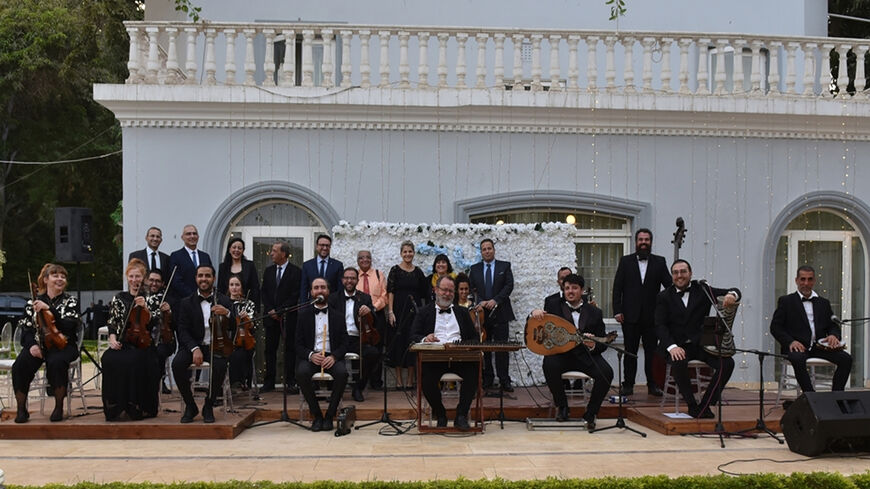 An Israeli film called “The Band’s Visit” about the journey to Israel of an Egyptian orchestra won praise and many awards in 2007, including three prizes at the prestigious Cannes Film Festival. This year, on Israel’s Independence Day, for the first time in 40 years and as a sign of warming relations between the countries, a Jewish-Arab orchestra traveled to Egypt.

Israel’s Ambassador to Egypt Amira Oron hatched the plan to bring the Firkat Alnoor Orchestra (Orchestra of Light) to Egypt, because of the diverse composition of the band, which presents a repertoire of classical Arab music. The concert played by the orchestra on the occasion of Israel’s Independence Day was received with great enthusiasm.

In the past years, Israel-Egypt relations have seen significant expansion in a variety of economic areas. The orchestra’s visit and concerts were meant to add additional substance to these ties, and another space for contact between the Israeli and Egyptian people. Amir said in her speech, “We, diplomats, use quite often the words 'peace and stability.' For us, the Israeli Embassy in Cairo, these words, as seen from the data I presented, have daily meaning. Every day we make more peace, with the help of our Egyptian partners.”

The trend of warming relations between Egypt and Israel is found mostly in the economic realm, after years of minimal connections. One of the reasons for growing closeness now is Egypt’s desire to receive Israeli support in Washington to release aid funding, which is delayed in Congress. But mostly, it is the desire and need to advance the Egyptian economy.

Egypt has observed the huge success of the economic aspects of the Abraham Accords, which have led among other things to the entry of Israeli companies in the fields of water, agriculture and cyber into the Moroccan, the Emirati and the Persian Gulf markets overall — and it is envious. Jordan, Israel and the United Arab Emirates have signed an agreement to build a solar power station in Jordan that would sell electricity to Israel, in exchange for which Israel will desalinate water from the Mediterranean for Jordan.

Though Egypt was the first Arab country to sign a peace accord with Israel, relations were cold on many fronts over the years. Now, it seems, Cairo is eager to jump aboard the new regional peace train. A concrete sign of this shift should be registered May 29. Following contacts with the Egyptian government, including talks and ministerial meetings, if there are no more delays, Israel will authorize a plan to expand economic ties with Egypt in a variety of fields.

The declared goal is doubling the scope of commerce (not including the sale of natural gas) from $330 million in 2021 — a growth of 60% compared to 2020 — to $700 million. The government’s decision notes that despite the peace accords signed in 1981, the extent of commerce between the nations is negligible and the conditions have now matured to change this picture.

The suggested decision includes several fields, among them expanding regional cooperation in the field of natural gas — including a full authorization of the gas pipeline in Nitzana, which is supposed to increase the amount of gas available for export. Egypt seeks to greatly increase the amount of gas imported from Israel, including for its own needs, but especially to pipe and sell to Europe, which is desperate for alternate energy sources to Russia.

Also included in the decision is the creation of a taskforce within the prime minister’s office for the issue as well as joint working groups on topics such as technology and climate, the expansion of tourism by means of opening more flight routes to destinations in Egypt and a real increase in the involvement of Israeli companies in developing agriculture in Egypt, with an emphasis on water technology and desert agriculture.

Increased exports from Egypt, including fresh produce and raw materials for construction and industry, are also mentioned. In practical terms, it will also mean growing and fitting the commercial terminal in Nitzana and widening the roads leading to it to greater truck traffic. The cost of the plan is about $100 million Israeli shekels ($29.8 million) over two years.

The plan’s geostrategic importance is immense. The moderate/pragmatic regional axis, to which Turkey has recently returned as well, is growing and expanding. The main reason Turkish President Recep Tayyip Erdogan has given for warming relations is the economy, in light of the situation in his country, leading up to the election next year.

These developments send a clear message to the rest of the region. First, by warming economic ties with different countries in the Middle East, Israel sends a signal to its close neighbor Jordan, which has already bought gas from Israel for its power stations, and has signed the solar-water agreement, as mentioned. Israel also sends a signal to the Palestinians, who continue to remain outside the economic-diplomatic game in the region, depending quite significantly on the generosity of other nations.

Another economic step has happened this week between the nations. After 2½ years, the Qualified Industrial Zone (QIZ) conference has convened again. The QIZ Accord, signed by Israel and Egypt in 2004, grants a tax exemption in the American market to Egyptian products that were produced in cooperation with Israeli companies. Representing Israel was Yaniv Tessel, joint chairman of the QIZ conference on behalf of the Foreign Trade Administration at the Israeli Ministry of Commerce and Industry. In addition to the committee’s talks, he also visited Egyptian textile plants that are operating in the QIZ framework and appeared on a panel of senior officials as part of the QIZ conference organized by the Global Trade Matters company.

In regard to the conference, with the participation of several representatives of Israeli companies and dozens of Egyptian businessmen who are interested in business with Israel, Tessel said, “These meetings are a sign of warming relations between Israel and Egypt in the context of recent regional developments. The change in the regional economic landscape [following the Abraham Accords] will certainly positively influence not only the Israeli economy but essential economic relations between Egypt and Israel, which have so much potential.”