Cario's openness to warming bilateral ties with Jerusalem has been limited, but recent progress might signal that even Cairo understands that times have changed. 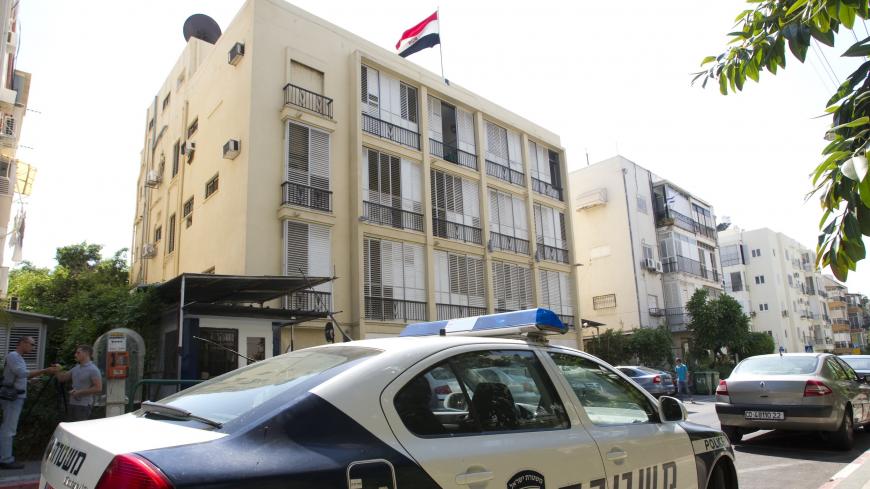 A Israeli police car is parked in front of the Egyptian Embassy in the city of Tel Aviv on Sept. 11, 2011. - JACK GUEZ/AFP via Getty Images

Intelligence Minister Eli Cohen came back to Israel March 9, after two days of visiting Sharm el-Sheikh in the Egyptian Sinai Peninsula. Cohen met with his Egyptian counterpart Nasser Fahmi and with other senior Egyptian intelligence officials to discuss a series of security issues, including Egyptian efforts to increase the security of Sinai resorts so tourists will return.

The visit was exceptional not only for its length and publicity, but also because the delegation also included several Israeli businesspeople, senior figures in Israel’s food, tourism, agriculture and energy industries. The inclusion angered Economy and Trade Minister Amir Peretz, who was apparently not consulted beforehand. It appears that Israel’s ambassador to Egypt Amira Oron was not consulted either.

The Israeli businesspeople met with several heads of Egyptian companies hoping to enter the Egyptian market. Bilateral trade currently concerns low-tech industries such as construction and textiles, and Israel the economy department at the embassy in Cairo is working diligently to change that.

There was a concrete change in commercial ties last week. Reports from March 5 revealed that the Egyptian national carrier Egyptair had submitted a request to operate Tel Aviv-Cairo flights. The company reportedly plans to operate 21 weekly flights on the route. Until the COVID-19 pandemic, flights between Tel Aviv and Cairo were operated on the Egyptian side by Air Sinai, a subsidiary of Air Egypt with a single airplane company established in the framework of the 1979 Israel-Egypt peace treaty. It flew with no logos or flag.

Air Sinai became a symbol of Cairo’s attitude toward Israel: The peace treaty was respected but at the required minimum and without drawing any attention.

Clearly, the Abraham accords signed last year with the United Arab Emirates and with Bahrain and the reestablishment of relations with Morocco are forcing Egypt to rethink its cold peace with Israel. The expected arrival of several Arab carriers to Israel’s Ben Gurion airport, including Etihad Airways, Gulf Air and Royal Air Maroc, breaks a long taboo and beyond questions of politics and diplomacy, Egypt must be betting that a Tel Aviv-Cairo flight route will become profitable.

Jerusalem was understandably enthusiastic about el-Mulla’s visit. It reflected the growing energy ties between the two countries, fruits of years of efforts by Steinitz and other Israeli officials. Still, prominent Arab Affairs correspondent Jacky Hugi poured some cold water over the Israeli enthusiasm. In a Maariv article after the visit, Hugi noted that Egyptian press had not reported on the visit. The media coverage simply noted that the meeting had taken place, a very different reception from that in Israel. Hugi explained that Egypt needs Israel on the natural gas and other energy issues and that this was the only reason for the ministerial visit.

Of course, Hugi is right. For years, Cairo kept relations with Israel on a back burner, and many in the Egyptian government oppose any change. The same is true for Egypt’s intellectuals. Few dare to challenge Egypt's anti-Israel stance.

Still, the above progress might signal that even Cairo understands that times have changed. Ideologically, it may not want to warm to Israel, but the reality of the new Middle East, with rapprochement between Israel and the Emirates, Bahrain and Morocco, might force it to make some adjustments.

Yoram Meital, a professor of Middle East studies at Ben-Gurion University, has been involved for several years on a unique project to safeguard Jewish heritage in Egypt. He told Al-Monitor that though the project, which concerns the preservation of synagogues, cemeteries, schools and valuable Judaica artifacts in Cairo and elsewhere in Egypt, is not linked directly to Egyptian and Israeli bilateral relations, any improvement in the ties between Israel and its Arab neighbors naturally creates a better political atmosphere and may contribute, among other things, to the expansion of such projects.

"Under President Abdel Fattah al-Sisi, the Egyptian authorities are undergoing a significant positive attitudinal shift toward preserving the heritage of the Jewish community and its assets. This shift echoes a changing trend in public and cultural discourse that is developing in Egypt in recent years, according to which the Jewish community is seen as part and parcel of Egyptian society and its history,'' said Meital. He added that though they are in the minority, these voices offer a more positive view of the Jewish community.

While the Egyptian regime is now working to preserve Jewish sites, that interest does not necessarily mean Cairo is looking to warm ties with Israel. Still, for all Israeli friends of Egypt, any step forward by either side is a positive development.