In another sign of warming relations, Israel's Israir Airlines Ltd. wants to operate flights from Tel Aviv and Haifa to the Sinai Sharm el-Sheikh resort town. 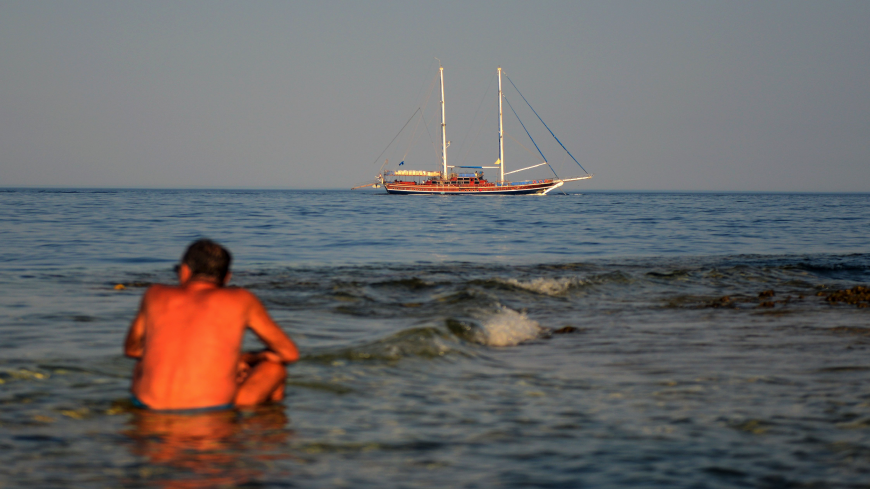 A tourist sits in the water in the Egyptian Red Sea resort of Sharm el-Sheikh on Aug. 13, 2017.

Israir Airlines Ltd. has submitted this week a request to operate commercial flights from Tel Aviv’s Ben Gurion airport to the sea-side Sharm el-Sheikh resort city in the Egyptian Sinai Peninsula. The company would like to operate two flights a day. So far, no Israeli air flight company offered this route. Israeli tourists wishing to visit Sharm el-Sheikh and its environs could either rent private planes or arrive there by bus or taxi.

Flights from Tel Aviv to Sharm el-Sheikh should take an hour and 10 minutes. The company has not yet decided how much it will charge for the flight, but it did indicate it would also like to operate flights from Haifa.

The company’s vice president for marketing and sales, Gil Stav, told Israeli press, "Sharm el-Sheikh could now become an international tourist destination, attracting Israeli consumers. It’s a destination that could offer a vacation abroad even now, when the range of international vacation destinations is much shorter (because of the pandemic)."

The issue of vacationing in the Sinai Peninsula came up at the March 9 visit of Intelligence Minister Eli Cohen to Sharm el-Sheikh. Cohen arrived accompanied by a group of businesspeople, including seniors from the Israeli tourism industry. At their different meetings, the Egyptian counterparts exposed the measures taken by the government in the past few months to guarantee the security and health of tourists once the Peninsula reopens. In fact, last February, Egyptian authorities said they have constructed a 36-kilometer (22-mile) concrete barrier around Sharm el-Sheikh resort to protect tourists against any possible terror attack.

The expected opening of a Tel Aviv-Sharm el-Sheikh flight route comes just days after a request submitted by Air Egypt to operate a Tel Aviv-Cairo line. The operation of this air path is part of the 1979 peace treaty between the two countries, but over the years, Egypt was reluctant to invest in it. The national Egyptian air carrier AirEgypt had created at the time a one-airplane company named Air Sinai for that sole purpose. Air Sinai had stopped its flights when the coronavirus started. Jerusalem considers the request of AirEgypt to operate this air path as a diplomatic positive sign.

For the moment, because of coronavirus, Israeli skies are closed and so is the territorial Taba crossing point. On March 11, Israel’s Interior Ministry opened the Taba crossing for a few hours to enable Israelis to return home. Still, many in Israel hope that by the time the Passover holiday starts, both Taba and Ben Gurion airport would fully open (several international flight routes are expected to resume tomorrow already). They miss Sinai with its beaches and coral reefs, and with Sharm el-Sheikh’s luxurious hotels and the silence of the desert.