Economic ties between Egypt and Israel seem to be on the right path amid growing cooperation in various fields. 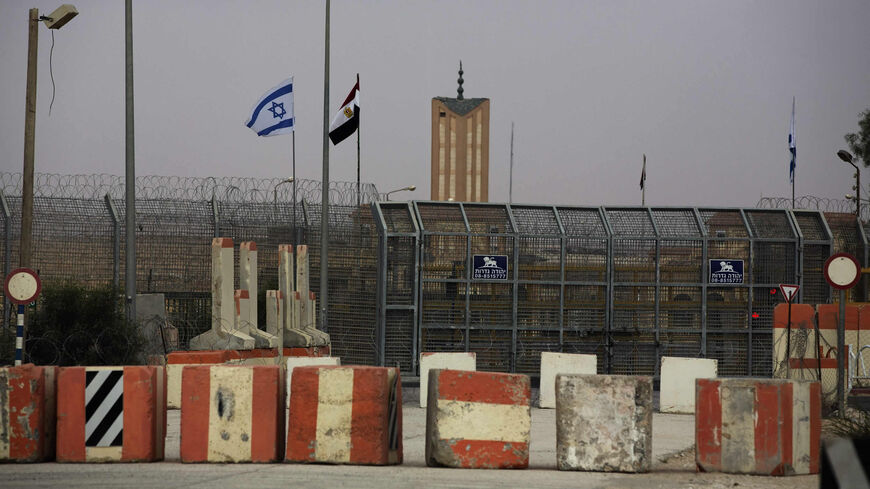 Israeli and Egyptian flags are seen at the Nitzana border crossing along the southern Israeli border with Egypt near the Israeli village of Nitzanei Sinai, Aug. 20, 2013. - Menahem Kahana/AFP via Getty Images

CAIRO — An Egyptian delegation of 12 businessmen and members of the Federation of Egyptian Industries arrived in Israel June 19 for the first time in 10 years. Israeli officials and observers believe that this visit reflects the growing economic relations between Egypt and Israel.

Israeli Ambassador to Egypt Amira Oron, who accompanied the delegation during the visit to Israel, said in a tweet, “For the first time in a decade, a delegation of 12 prominent Egyptian businessmen in the fashion industry visits the country today. I am accompanying the delegation and welcome the visit, which will contribute to advancing the common interests of the two countries.”

During the trip, the Egyptian delegation met with Israeli officials from various organizations, including the Manufacturers Association of Israel, Federation of Israeli Chambers of Commerce and Israel Export Institute.

The delegation also visited factories in Israel and met with representatives of major Israeli companies, according to a joint statement by the Israeli ministries of foreign affairs, economy and industry.

Israeli Economy Minister Orna Barbivai said in the statement that the delegation’s visit is another step in consolidating the economic partnership between Israel and Egypt. She noted that this partnership will boost trade and economic growth between the two countries, as well as prosperity in the region.

Oded Joseph, deputy director general of the Middle East Division at the Israel Ministry of Foreign Affairs, said in the statement, “Economic cooperation has always been a significant component in the promotion of relations, and the QIZ agreement has a special place in this. We expect that the visit will lead to the expansion of cooperation within the QIZ’s industrial areas.”

In 2004, Egypt signed the Qualified Industrial Zones (QIZ) protocol with Israel and the United States, allowing it to export duty free to the United States as long as 11.7% of the ingredients are from Israel.

The Israeli joint statement also quoted the head of the Foreign Trade Administration at the Israeli Ministry of Economy, Ohad Cohen, as saying, “The market in Egypt is developing, and we welcome their willingness to visit as well as the Egyptian interest in Israeli industry.”

The Egyptian Ministry of Trade did not respond to Al-Monitor’s request for comment on the visit.

Nimrod Goren, head of the Israeli Institute for Regional Foreign Policy, Mitvim, told Al-Monitor that the Egyptian delegation met during its trip to Israel with officials and representatives of the trade sector to pave the way for further acquaintance for the establishment of new joint projects. He said that the visit came as part of the QIZ agreement that facilitated the trip.

The delegation’s visit followed a similar visit by representatives from Israeli economic organizations to Egypt in May to attend the QIZ conference held in Cairo.

In late March, Barbivai visited Cairo in the first such visit by an Israeli official with the aim of enhancing trade and economic cooperation between the two countries.

On May 30, the Israeli Ministry of Economy revealed a new plan between the two sides, with the aim of doubling trade exchange — except for tourism and natural gas exports — by about $700 million by 2025.

The ministry said that the Nitzana border crossing between el-Ouga in the Sinai Peninsula and Nitzana in the south of Israel will be developed to serve as a regional logistic port between the two countries.

According to Israeli data, trade between Israel and Egypt amounted to $330 million in 2021.

Goren said that the Israeli government is eager to expand relations with Egypt to new sectors, and is ready to make it happen.

Egypt signed a peace treaty with Israel in 1979 after decades of conflict. The two countries maintained full diplomatic relations, although the term “cold peace” still characterizes them.

Goren noted that Israeli-Egyptian relations have been progressing since the formation of the current Israeli government a year ago. He explained that relations were mostly based on strategic cooperation, but economic cooperation has also been increasing, whether over natural gas, tourism or trade.

He pointed to Egypt’s participation in the Negev Summit in late March, which brought together the leaders of Israel, the United States and four Arab nations. He also mentioned the recent agreement reached between Egypt, Israel and the European Union to transport Israeli gas through Egypt to Europe.

The EU, Israel and Egypt signed June 15 a deal to boost the export of natural gas from Israel to Europe via Egypt. In early 2020, Israel began exporting natural gas to Egypt.

On June 23, Israeli Minister of Energy Karine Elharrar told the BBC that the gas file played a major role in consolidating political and economic relations with a number of neighboring Arab countries and the EU as well.

“Israel has no direct pipelines to transport gas to Europe, but does have a strategic partnership with Egypt,” she said.

Goren said that relations are increasingly warm, and cooperation in more sectors are currently being explored.

However, Goren noted, “There is another challenge at the civil level. The Israeli and Egyptian people rarely meet and do not exchange visits. There are still negative feelings about normalization with Israel in Egypt.”

He added that this challenge must be the next goal to boost ties with Israel. He believes that progress in the peace process between Palestinians and Israelis will make this task easier.

Mohammed Soliman, scholar at the Middle East Institute, told Al-Monitor that the growing economic cooperation between Egypt and Israel reflects global geopolitics dynamics and the changing dynamics in the region.

He explained that Egypt and Israel have joint interests that are reflected in their cooperation in the eastern Mediterranean gas file and their security coordination and cooperation under the Camp David Accords.

He stressed at the same time that “the new tripartite gas deal between Egypt, Israel and the EU is another aspect of the promotion of bilateral relations between Egypt and Israel. There is certainly a lot of potential, especially in sectors such as technology, medicine and manufacturing.”

Soliman concluded, “The normalization between Egypt and Israel has occurred naturally and gradually. Economic relations are a prominent and important step in this direction.”