Russia's exclusion from global payments systems has prevented thousands of Egyptian students in the country from receiving money from their families back home. 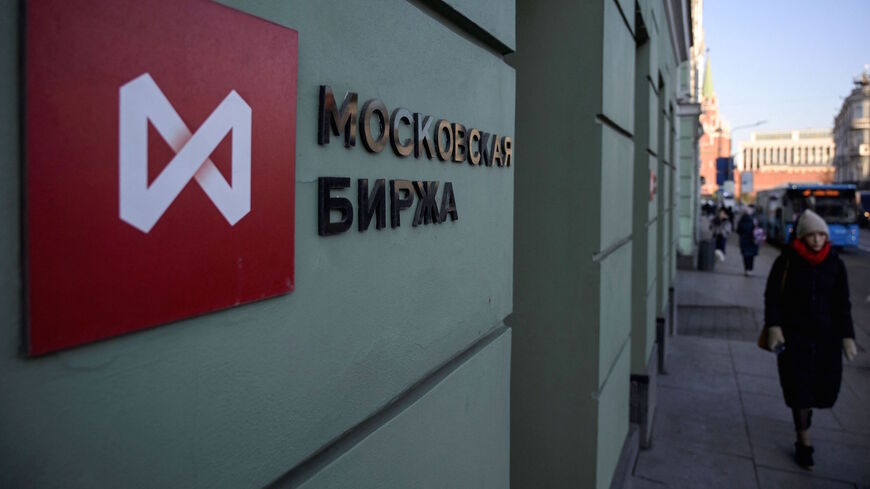 A view of the Moscow's stock market building in downtown Moscow on Feb. 28, 2022. - NATALIA KOLESNIKOVA/AFP via Getty Images

Facebook groups for Egyptian students studying in Russia are buzzing as members ask each other how to transfer money into the country. Since Russian banks were banned from the international SWIFT network, thousands of Egyptian students have been cut off financially from their families and questionable networks are springing up with offers to help transfer money into Russia.

On Feb. 26, Western countries cut off Russia from the SWIFT network in response to the Russian invasion of Ukraine. Thousands of Egyptian and other Arab students have been left unable to receive money from their families back home. According to the Russian ambassador to Egypt, there are more than 12,400 Egyptian students currently studying in Russia.

Islam Nour is a medical student in Cheboksary, the capital city of Chuvash Republic, which is part of the Russian Federation. He told Al-Monitor that his family in Beni Suef province has been trying for more than a week to send him $3,600 in tuition in addition to a personal allowance.

Nour said, “They went to Western Union, where they were told they can no longer transfer money to Russia. They reached out to the central bank’s complaints department, but the bank clerk told them that they cannot help them.”

He explained that he had to borrow money from another university student, adding, “The cost of living has increased since the start of the war. Prices have gone up by more than 30%.”

On March 22, the Egyptian Ministry of Immigration stated that Nabila Makram, the minister of immigration and expatriates' affairs, held a Zoom meeting with representatives of Egyptian students in Russia. After listening to their complaints, she asked all Egyptian students studying in Russia to register so that the government can help them.

There are also dozens of posts offering help transferring money from Egypt through the Vodafone Cash service. Individual users offer to transfer money from their bank accounts in Russia to the students for a commission of 1% to 3% of the total, which can vary widely with the volatile ruble exchange rate. WhatsApp groups have sprung up promoting the service to students and parents.

There are already posts reporting that students and their families have been robbed by these untraceable strangers.

Speaking to Al-Monitor on condition of anonymity, one of the people advertising this service through Facebook groups said, “I will send you a phone number to which you will need to transfer money in Egyptian pounds via Vodafone Cash.” He offered to prove his identity by showing his passport and university card, insisting, "I am not stealing a single pound from you.”

Abdullah al-Sayed al-Hamali from Alexandria said that he tried for days to send money to his son Ahmed, a student at the Ural State Medical University in Yekaterinburg. “I called the central bank, where I was told that there is no solution. Do I have to leave my son there begging or stealing to make ends meet?”

He went on, “I posted in a number of Facebook groups that the central bank does not have solutions and I asked for help. A person replied that it is possible to send money via a phone number to a person inside Egypt through Vodafone Cash service, and that he would send the amount in rubles to my son.”

Hamali added, “I sent 1,000 pounds at first to test this person’s honesty. He sent the sum to my son in return for a 3% commission. Then I sent him the rest of the amount including the tuition fee.”

Al-Hamali is extremely concerned about fraud. He said he saw comments from people claiming they'd been victimized and added, “A lot of people contacted me after my posts in Facebook groups and I felt that there were people trying to take advantage of these situations.”

He added, “The government must find a solution and save our children. Some are trying to take advantage of the situation and defraud the students' families.”

Nour said, “It is dangerous to transfer money to unknown people. They may take the money and disappear. I don’t know what to do to obtain the tuition fees from my parents.”