Egypt called for diplomacy to solve the Ukrainian crisis, avoiding taking any sides in order not to harm its ties with Russia, the United States or NATO. 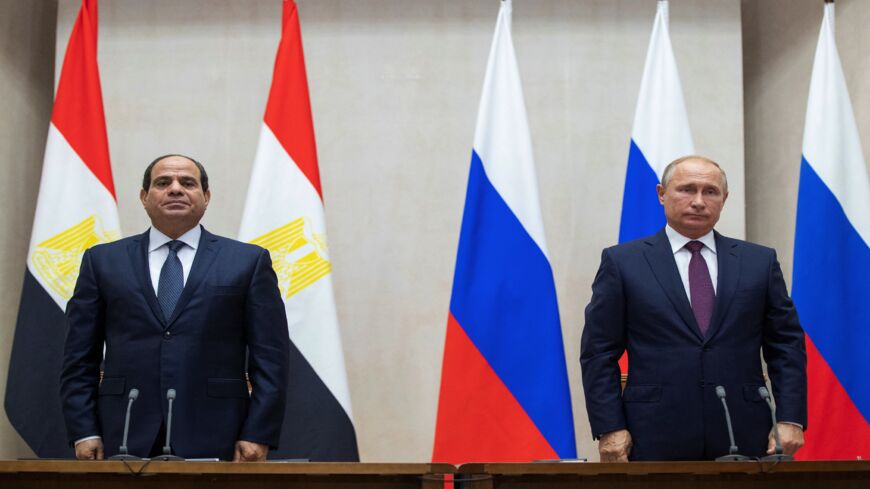 Russian President Vladimir Putin (R) and Egyptian President Abdel Fattah al-Sisi pause during a minute of silence to commemorate the victims of an explosion in a vocational college in Crimea, during their talks in Sochi on Oct. 17, 2018. - PAVEL GOLOVKIN/AFP via Getty Images

Egypt has refrained from condemning the Russian military attack in Ukraine or mentioning Russia by name in its first reaction to the conflict.

Russian President Vladimir Putin launched a military operation in Ukraine Feb. 24, in the biggest assault on a European country since World War II. The attack came amid tensions between Russia and the West over plans to admit the former Soviet republic into NATO.

Hours after the Russian attack, the Egyptian Foreign Ministry issued a statement in which it voiced deep concern over developments in Ukraine.

The ministry’s statement did not mention Russia by name. It only underlined the importance of upholding dialogue and diplomacy to reach a political settlement to the Ukrainian crisis.

A political settlement, the ministry said, “will preserve international security and stability, and ensure that the situation does not escalate and avoid aggravating humanitarian and economic conditions and their impacts on the region and worldwide.”

Observers opine that Egypt has been very careful in its comments regarding the Russian military attack in Ukraine and declined to criticize Moscow publicly to avoid any harm to its growing economic and military relations with Russia.

Samir Ragheb, a retired brigadier general and head of the Arab Foundation for Development and Strategic Studies, said Cairo does not want to anger Russia, the United States or NATO.

“Egypt is treading cautiously in the Ukrainian crisis to avoid harming its ties with either the US, NATO or Russia,” he told Al-Monitor by phone.

The strategic analyst said Egyptian policy-makers don’t want to risk Egypt’s interests by taking sides in the Ukrainian crisis. “Cairo will gain nothing from siding with any party to the conflict as Egypt maintains good relations with all parties whether the West, Russia or Ukraine.”

"I urge Russia and Ukraine to refer to the voice of reason," Grand Imam of Al-Azhar Sheikh Ahmed El-Tayyeb said in a statement. "Wars will only bring destruction and hatred to our world and that conflicts can only be settled by dialogue.”

On Feb. 28, the Cairo-based Arab League held an emergency meeting upon an Egyptian request to discuss developments in the Ukrainian crisis.

A statement issued following the meeting reiterated support to efforts aimed at settling the crisis through dialogue and diplomacy. The meeting recommended the formation of an Arab ministerial contact group to communicate with parties to the conflict to reach a diplomatic solution to the crisis.

Hussein Haridy, a former assistant foreign minister for Arab affairs, said the Arab League meeting aimed to formalize an Arab position regarding current developments in Ukraine without condemning any side to the conflict.

“The Ukrainian crisis is no longer confined to the Ukrainian border,” Haridy told Al-Monitor over the phone. “The situation has turned into a confrontation between Russia and the US-led NATO.”

“Egypt wants a diplomatic solution to the crisis without taking sides in the conflict,” he added.

Ragheb echoed a similar view, noting that Egypt does not want to risk its strategic relations with the United States.

“Egypt has strategic relations with the US and is a major non-NATO ally to Washington, a status that provides foreign nations with benefits in defense, trade and security cooperation,” he said.

The analyst continued, “Cairo also has very good relations with Russia. It does not want to anger Moscow with which it has growing ties in different fields.”

Cairo has bought billions of dollars worth of Russian weapons over the past eight years, including fighter jets, air defense systems and frigates. The two countries also signed a strategic cooperation treaty in 2018 intended to bolster trade and other ties between the two countries.

Russia will also provide 85% of the $25 billion necessary for the construction of Egypt's first nuclear power plant in Dabaa in the northwestern part of the country, and plans to establish an industrial zone in the Suez Canal region.

In a sign of improving ties between the two countries, Russia lifted a ban on tourist flights to Egypt’s Red Sea resorts in August after a six-year hiatus following the crash of a Russian plane over the Sinai Peninsula in 2015. Russian tourists make up around a third of the tourist inflows into Egypt, whose tourism industry is a main source of foreign income.

Haridy opines that most Egyptians support the Russian view that Washington is seeking to surround Russia via Ukraine.

The former Soviet Union was a main ally of Egypt during its military conflicts with Israel in 1967 and 1973.

“The Egyptian people will not forget who stood by their side during the 1967 and 1973 wars during which Egypt fought with Soviet weapons,” Haridy said. “The Egyptians will never forget who helped in the construction of the High Dam, which is a symbol of the Egyptian-Soviet friendship.”