Cairo voted in favor of the US-backed UN resolution condemning the Russian invasion, but is not shutting down ties with Moscow. 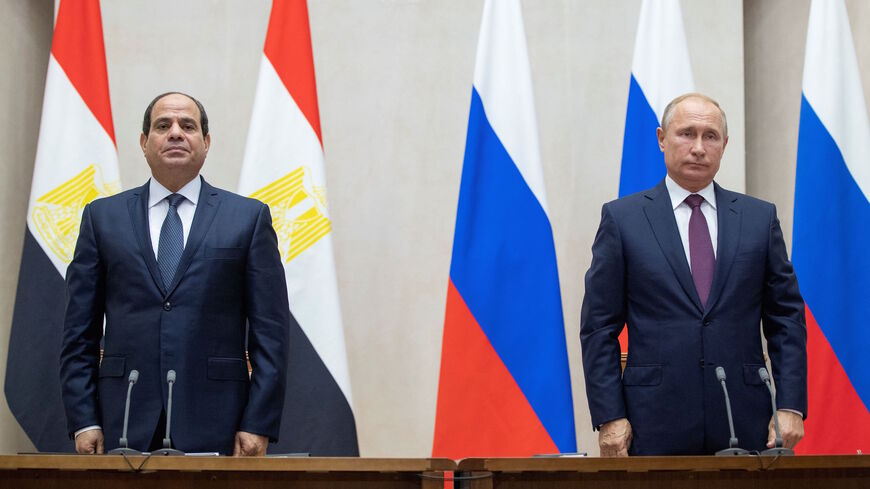 Russian President Vladimir Putin (R) and Egyptian President Abdel-Fattah el-Sisi pause during a minute of silence to commemorate the victims of an explosion in a vocational college in Crimea, during their talks in Sochi on Oct. 17, 2018. - PAVEL GOLOVKIN/AFP via Getty Images

The Russian invasion of Ukraine has put Egypt in a bind, due to the intertwined interests the country has with both the United States and Russia.

On Feb. 24, the Egyptian Foreign Ministry commented for the first time on the Russian attack on Ukraine, stressing “the need to give priority to dialogue and diplomatic solutions, and to the endeavors that would speed up a political settlement of the crisis in a way that would preserve international security and stability.”

Yet Egyptian diplomatic neutrality was not reflected in the pro-government media.

At the beginning of the Russian attack on Ukraine, the Egyptian media sympathized with Russia and its justifications for the offensive.

Egypt called for an emergency Arab League meeting Feb. 27 to discuss the repercussions of the Russian war on Ukraine. Observers believe that Cairo’s call aims to unify a neutral Arab position toward the crisis, particularly since the United Arab Emirates (UAE) abstained from voting Feb. 26 on a draft resolution on Ukraine at the United Nations Security Council, which reflects the UAE's tacit bias toward Moscow.

On Feb. 28, the Arab League held a meeting to discuss the repercussions of Russia's war on Ukraine, and issued a neutral diplomatic statement affirming its support for a resolution of the crisis through dialogue and diplomatic means.

The Arab League also formed a ministerial Arab contact group tasked with following up and conducting the necessary consultations with the conflicting Ukrainian and Russian parties in order to help reach a diplomatic solution.

However, Egypt stepped away from this neutrality after the ambassadors in Cairo from the G-7 countries — Canada, France, Germany, Italy, Japan, the United Kingdom and the United States — and the European Union, called on Egypt March 1 to vote against the Russian invasion at the UN General Assembly.

They said in a statement, “What we need is for all UN member states to unanimously condemn the Russian offensive on Ukraine, stand by its side, and affirm our firm commitment to Ukraine's sovereignty and territorial integrity. We are certain that the Egyptian government adheres to the same principles of peace, security, stability and sovereignty based on international rules.”

However, Cairo tried to lessen the impact of the vote on its relations with Moscow. The Egyptian Foreign Ministry affirmed in a March 2 statement, following the UN meeting, that “the vote emanated from its firm belief in the international law’s rules and the principles and purposes of the UN Charter.”

It continued that Egypt stresses the need to “discuss the roots and causes of the current crisis and to deal with it in a way that would ensure defusing the crisis and achieve safety and stability.”

The Egyptian Foreign Ministry noted that it “rejects the imposition of economic sanctions that is not part of a multilateral international system mechanism, based on previous experiences that had severe negative humanitarian consequences and aggravated the suffering of civilians over the past decades.”

Cairo did not only issue a statement justifying its vote against Russia. On March 2, Egypt’s Mada Masr website quoted a government official as saying that Cairo explained fully the reasons behind the vote to its Russian friends, and attributed Egypt’s changed position at the UN forum to “the disturbing humanitarian crisis, but we are turning a blind eye to the reasons behind the Russian concern.”

Egypt also tried to keep the Suez Canal away from the Russian-Ukrainian crisis. It announced March 3 that the Suez Canal would not be closed to Russian ships. The head of the Suez Canal Authority, Lt. Gen. Osama Rabie, said, “The Suez Canal is a neutral global canal that is not subject to policies and wars. We cannot prevent any ship from navigating the canal for any political reason, and we always try to distance the canal from the surrounding political circumstances.”

Egypt also relies on Russia for energy imports. Just days before Russia’s invasion of Ukraine, Egypt’s Ministry of Energy and Mineral Resources announced that Moscow and Cairo will shortly sign an initial agreement to start using natural gas in the transportation sector.

While the status of this agreement is unclear, Mohamed Hamed, director of the Eastern Mediterranean Forum for Political and Strategic Studies in Cairo, told Al-Monitor that “Egyptian-Russian relations can weather the Ukrainian crisis.” He added, “The agreements and relations between the two countries will not be affected by the Egyptian position at the United Nations.”

Hamed does not believe “Egypt will participate in the sanctions against Russia even if the former [Egypt] is subjected to US-European pressure.”

Tarek Fahmy, professor of political science at Cairo University, told Al-Monitor, “Cairo’s desire is that the war between Russia and Ukraine ends as soon as possible, due to the economic losses it has sustained.”

Reuters reported March 2 that the Russian invasion had caused Egypt economic losses, saying, “Egypt has seen hundreds of millions of dollars leave its treasury markets since the Russian invasion of Ukraine last week as investors flee emerging markets for safer pastures, two bankers with knowledge of the matter said.”

Fahmy said, “Egypt is committed to neutrality despite Western and Russian pressures, because Cairo has interests with all parties to the crisis, and it is difficult for it to take sides.”

He noted, “Egypt could change its position toward the Russian war on Ukraine if the war continues, based on international changes and the extent of human losses in Ukraine.”

Fahmy added, “The Egyptian call for the Arab League to discuss the repercussions of the Russian war on Ukraine was designed to unify the Arab position. But the Arab countries’ positions vary on the ground. At the beginning of the war, the UAE sided with Russia, which does not go in line with Egypt's commitment to declared neutrality.”

He concluded, “With time and based on the repercussions of the war, the UAE had to condemn the Russian operation in Ukraine at the UN General Assembly.”

Fahmi went on to say, “Egypt will continue to adopt a neutral diplomatic position because of its concerns of losing any of the party’s support. But if the war in Ukraine drags on, Egypt will be forced to call for a diplomatic solution to the crisis, especially since the war affects the Egyptian economy.”

He added, “Egypt should lead the Arab nations and urge the Arab League to cooperate with the international community to end the war, especially since Cairo enjoys the trust of both warring sides and it is in its interest to halt the war as soon as possible.”

Ibrahim Ayyad contributed to this report.