Russia's invasion of Ukraine and Egypt's vote in favor of a UN resolution condemning Moscow could possibly throw a wrench into the Dabaa nuclear plant project, a joint project with Russian companies. 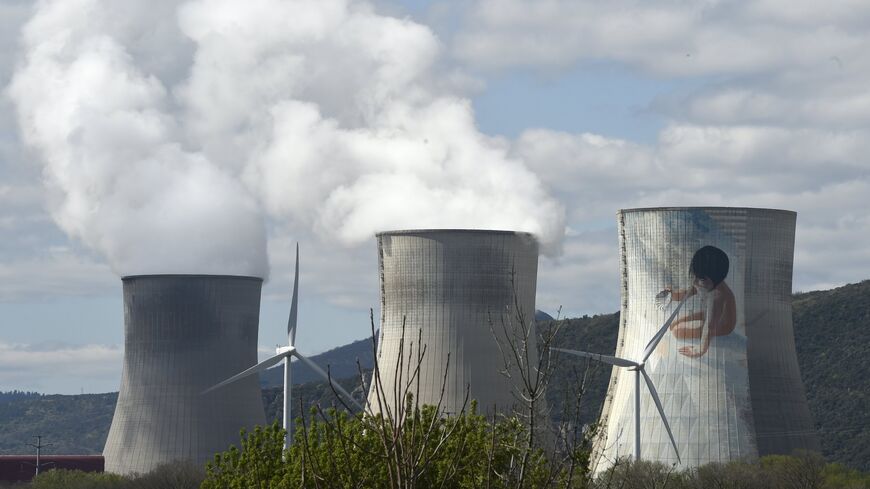 A picture taken on April 7, 2016, shows windmills and a painting at the Cruas Meysse nuclear power plant located in Cruas and Meysse, near the town of Montélimar, France. - PHILIPPE DESMAZES/AFP via Getty Images

CAIRO — The Russian war on Ukraine and the US and Western sanctions against Russia have raised questions about the fate of one of Egypt’s main energy projects as its launch date approaches. The Dabaa project is the first nuclear power plant in Egypt, implemented by Russia’s State Atomic Energy Corporation, Rosatom.

On Jan. 18, Rosatom Director General Alexey Likhachev told Russian journalists that the construction of the first reactor at the Dabaa nuclear plant will start in July.

But the project could be disrupted by Russia's war in Ukraine. The invasion prompted European countries and the United States to impose economic sanctions against Moscow as well as a number of Russian companies and figures, possibly delaying the Egyptian project.

In a Feb. 24 press statement, the Egyptian Foreign Ministry called on all parties to the Ukrainian crisis to prioritize dialogue and diplomatic solutions and to settle the crisis politically in a way that preserves international security and stability, ensures that the situation does not escalate or deteriorate and prevents the humanitarian and economic situations from worsening.

On March 2, Egypt voted in favor of a UN General Assembly resolution condemning the Russian aggression on Ukraine. However, following the vote, Egypt’s permanent representative to the UN issued a statement explaining that Cairo’s vote stems from its firm belief in international law and the principles of the UN Charter. He stressed Egypt’s “rejection of economic sanctions that are not part of a multilateral international system mechanism, based on previous experiences that had severe and negative humanitarian effects and aggravated the suffering of civilians over the past decades.”

Analysts who spoke to Al-Monitor believe that the Russian war will affect the Egyptian nuclear project.

Magdy Hamdan, an Egyptian politician and former member of the National Salvation Front, told Al-Monitor that the project is very likely to be affected by the war. He expects work on it to be suspended and resume after the war, perhaps with a country other than Russia.

Hamdan added, “So far no important steps have been taken in regard to the Dabaa project, which means that it would be easy for the Russian companies to stop working.”

The project had already been postponed for nearly two years due to the COVID-19 pandemic. Construction was scheduled to start in the second half of 2020, but was postponed until mid-2022.

Speaking to Al-Monitor, Mohamed Hamed, director of the Eastern Mediterranean Forum for Political and Strategic Studies in Cairo, stressed that Egypt and Russia have strong relations, "especially in the armament, energy and the nuclear sectors,” and noted that the Dabaa nuclear project is very long-term and therefore delays are of little consequence.

However, he explained, “The Russo-Ukrainian war may affect the project’s start date due to the economic sanctions affecting the Russian firms.”

Hamed said, “The Russo-Ukrainian war renewed fears of the dangers of nuclear power plants and nuclear radiation, with nuclear threats and fear that nuclear plants in Ukraine would be targeted.”

Mohamed Soliman, a scholar at the Middle East Institute, commented in an interview with Al-Monitor, “Building a nuclear project for peaceful purposes is a strategic goal for Cairo. But as an emerging market, Egypt must take into account the risks tied to the sanctions imposed on Russia and how these can affect the Egyptian economy.”

Soliman said, "Washington realizes that Russia is a key player in the greater Middle East and has great influence in Syria and Libya, and that despite Egypt's vote in favor of the UN resolution condemning the Russian invasion of Ukraine, [Cairo] must take into its account its vital security interests with Russia in Libya, in addition to broader cooperation on the security and military levels.”

He added, “Cairo hopes that Washington will consider all of these factors [before sanctioning] Egypt, in the same way it did with Tel Aviv.”

On March 3, Attaqa quoted Egyptian Minister of Electricity Mohamed Shaker as saying that he does not believe the implementation of the Dabaa project will be disrupted.

On March 15, a source in the Egyptian Nuclear Power Plants Authority told the Russian TASS news agency that Western sanctions against Moscow will not affect the course of the Dabaa plant project.

The Egyptian and Russian presidents shared a phone call March 9. The Egyptian presidency said in a press statement, “Egyptian President Abdel-Fattah al-Sisi and his Russian counterpart Vladimir Putin discussed ways to enhance strategic cooperation between the two countries through the ongoing joint development projects between them," stressing “the strength of historical relations between Cairo and Moscow in various fields, in addition to the friendship at the popular and official levels.”

The Russian Foreign Ministry tweeted March 9, “Putin and Sisi discussed during a phone call ways to develop the strategic partnership between Cairo and Moscow, including the implementation of major joint projects in the field of nuclear energy.”

During a March 23 meeting with a delegation from the Egyptian Association of Graduates of Russian Universities, Russian Ambassador to Cairo Georgy Borisenko reassured his listeners that cooperation continues between Cairo and Moscow, stressing Russia's commitment to implementing all the agreements Moscow has signed with Egypt.

The Egyptian Nuclear and Radiological Regulatory Authority announced in a Feb. 28 press statement that a permit had been issued for the construction site of a dry storage facility for the nuclear fuel that will be consumed at the Dabaa nuclear plant throughout the lifetime of the plant, which is 60 years.

In December 2017, Cairo and Moscow signed an agreement to build Egypt's first nuclear power plant during Putin’s visit to Cairo, where he met with Sisi.

In November 2015, the Egyptian and Russian sides signed three agreements: one to build and operate nuclear power plants, one under which Egypt will obtain a construction loan from Russia to be repaid by selling the energy generated and a memorandum of understanding between the Egyptian Nuclear and Radiological Regulatory Authority and the Federal Environmental, Industrial and Nuclear Supervision of Russia.

The Dabaa nuclear project consists of four VVER-1200 Pressurized Water Reactors of AES-2006 design. The reactors, each with a capacity of 1,200 megawatts, are the safest and most common in the world, according to the Nuclear Power Plants Authority.

The cost of the project is estimated at $30 billion, 85% of which will be financed through a $25 billion Russian loan.