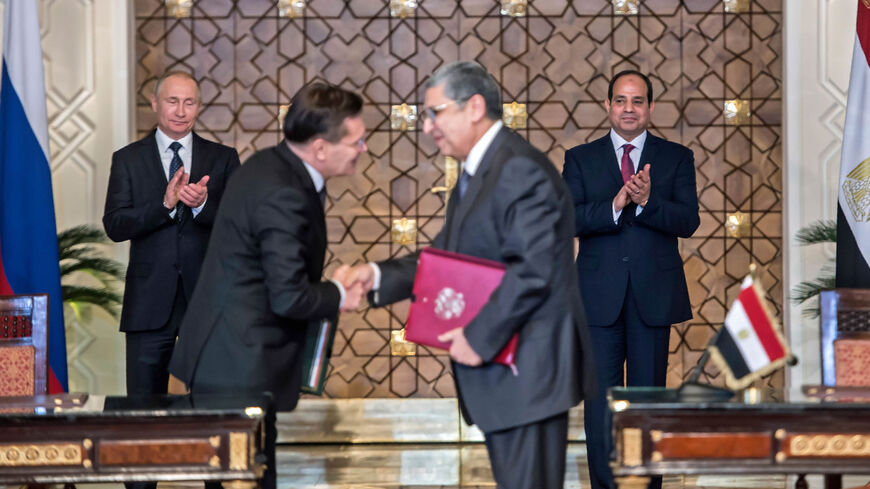 Egyptian Minister of Electricity and Renewable Energy Mohamed Shaker and Rosatom CEO Alexey Likhachev announced the start of the “first concrete cast” for the first unit of the Dabaa nuclear power plant during a ceremony held specifically to celebrate the historic occasion.

During the July 20 ceremony, Likhachev said that the construction of a nuclear power plant will allow Egypt to reach a new level of technology development, industry and education.

“The start of construction of the first power unit for the Dabaa nuclear power plant means Egypt will step into the global nuclear club. Rosatom will build the latest power units in the Arab Republic according to the ‘VVR-1200’ design,” Likhachev said.

He noted, “The construction of a nuclear power plant will allow Egypt to reach a new level of technology development, industry and education. This will be the largest project of Russian-Egyptian cooperation since the construction of the Aswan Dam.”

He continued, “Nuclear energy has been a dream of the Egyptian people for more than half a century, and it is a great honor for Rosatom to make it come true.”

Shaker said during the ceremony, “The issue of energy in all its dimensions has taken its appropriate place in the heart and mind of the political leadership, in recognition of the importance of the energy file that represents the main pillar for the future of stability and development in Egypt — and that it serves as a national security for the great Egyptian people.”

He explained that Egypt has paid special attention to reviving the Egyptian nuclear project, and it is among the leading countries in realizing the importance of nuclear energy and the role it can contribute to solving the two most important obstacles facing sustainable development, namely the provision of electricity and the provision of water.

In a phone interview with Al-Monitor, Ayman Hamza, spokesperson for the Egyptian Ministry of Electricity, explained that obtaining the greenlight to pour concrete at the power plant’s first unit — which is an important step and a major achievement — allowed the start of construction and concrete works at the reactor, in addition to the work currently being done on the site, including the completion of the seaport plant, and manufacturing for long-term equipment.

He said, “Since the first day we started the project, we have confirmed that the reactor will be of the third advanced type, which guarantees the highest degree of safety in the world so far.”

Hamza stressed that the nuclear reactor provided by the Russian side meets the highest requirements of nuclear security and safety and global safety characteristics, which are included in the designs of modern reactors of the developed third generation.

“The safety systems of the Russian reactors VVER-1200 provide an unprecedented level of protection against internal and external factors and influences,” he noted. “If, God forbid, a 400-ton plane crashed into the reactor body, it would not be affected. These reactors are insured against many factors such as floods, earthquakes and other hazards.”

Hamza confirmed that Egypt has taken these major steps to build the reactor as part of the state’s attempts to diversify energy sources.

He explained that there is great interest and coordination at the highest level between the Egyptian and Russian sides in order to complete all necessary steps and procedures to build the first Egyptian nuclear plant in Dabaa, about 300 kilometers (186 miles) northwest of Cairo.

Ali Abdel Nabi, former vice president of the Egyptian Nuclear Power Plants Authority, described the start of the construction as “good news,” which achieves a “great strategic goal” for Egypt, as part of its vision to diversify energy sources and enter the nuclear age to generate electricity through nuclear power.

“Egypt has been eagerly awaiting these measures. This is the result of efforts for many years since 1954, when President Gamal Abdel Nasser wanted to implement nuclear plant projects — but the dream faced many challenges and obstacles. Today, it has become a reality,” Abdel Nabi told Al-Monitor.

He stressed that energy has become the real key to progress and the main wheel of economic development, noting that providing energy sources and introducing nuclear energy in factories would provide more job opportunities.

“Laying the concrete block at the site of the first nuclear reactor unit will take place in tandem with mounting the mechanical installations of Russian-manufactured equipment,” he added.

Abdel Nabi explained that there are two teams operating simultaneously: One team is handling the concrete work, and the other team is mounting the supplies on a rolling basis as they arrive from Russia.

In 2017, Egypt and Russia signed an agreement to start work on the Dabaa nuclear power plant during a meeting between Egyptian President Abdel Fattah al-Sisi and Russian President Vladimir Putin.

On June 1, Russia's state-owned atomic energy company Rosatom announced the start of production of equipment for the Egyptian power plant on the Mediterranean coast.

During the past years, Egypt has strongly expanded the production of electricity by building huge stations that run on conventional fuels. Currently, Cairo has plans to export electricity to countries in the region such as Saudi Arabia and Sudan.

The Dabaa nuclear power plant is located about 300 kilometers northwest of Cairo. The Nuclear Power Plants Authority, which owns and operates the project, says that the plant will include four units, each with a power capacity of 1,200 megawatts, at a total cost of $28.5 billion, financed through a $25 billion Russian loan repayable over 35 years.

The plant is being built according to contracts that entered into force on Dec. 11, 2017, whereby Rosatom will build the plant and deliver the integrated life cycle of nuclear fuel, in addition to training staff and providing support in operating the plant as well as working to provide services to the plant during the first 10 years of its operation and building facilities designed to store spent nuclear fuel.