Cairo remains torn in its position on the Ukraine crisis for compelling financial and other reasons. 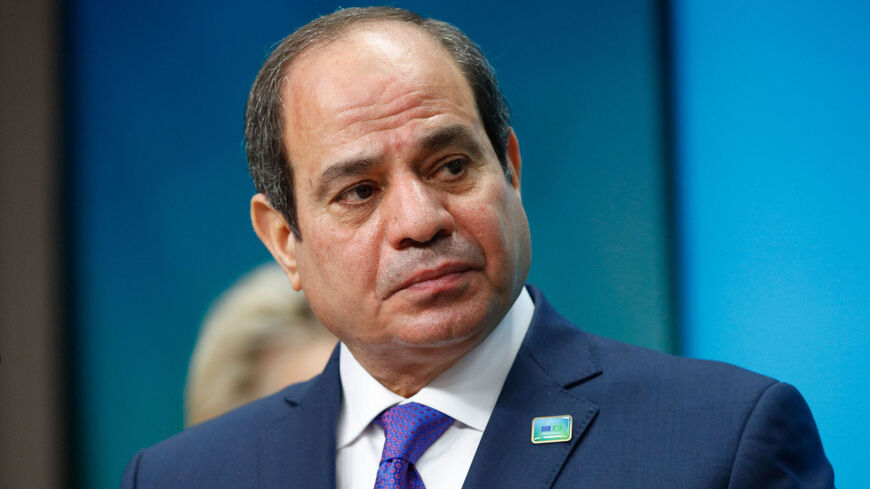 Egypt's President Abdel Fattah Al-Sisi takes part in a meeting on the second day of a European Union -African Union summit in Brussels on Feb. 18, 2022. - JOHANNA GERON/AFP via Getty Images

The contact between the two presidents is the first since the start of the Russian invasion of Ukraine on Feb. 24. Egypt has sought to remain neutral and find a balanced stance toward the crisis.

During the call, Sisi stressed the need to prioritize dialogue to settle the Ukrainian crisis, affirming Egypt's support for diplomacy that could avoid further aggravation of the crisis and preserve international security and stability.

The two leaders also discussed ways to strengthen strategic cooperation frameworks through joint development projects, according to a statement issued by Sisi's office.

According to a Kremlin statement, “The presidents discussed further development of the strategic partnership between Russia and Egypt, including major joint projects in nuclear energy and industrial production. Both parties expressed interest in continuing close cooperation in tourism and agriculture.”

The statement went on, “At the request of Abdel Fattah el-Sisi, Vladimir Putin explained the reasons for and goals of the special military operation to protect Donbass and spoke about Russia’s efforts during the talks with Ukrainian representatives. The president of Egypt thanked Russia for the efforts to evacuate Egyptian nationals from the conflict zone.”

Before the Russian invasion, Egyptians in Ukraine numbered about 6,000, including 3,000 university students. Since the start of the conflict, hundreds of Egyptians in Ukraine have sought refuge in neighboring countries such as Romania, Austria, Hungary, Slovakia, and Poland. Efforts to facilitate their return to Egypt are ongoing.

Soraya al-Farra, a professor of political science at Moscow University, told Al-Monitor, “Russia sees in Egypt a strategic partner in the Middle East. Both countries are keen on preserving and consolidating their ties.”

Farra said that Sisi’s phone call to Putin was designed to clarify Egypt’s vote in favor of the UN General Assembly resolution on March 2. “Cairo wanted to please the West and justify Russia's position at the same time,” she said.

Amid increasingly heated fighting on the ground in Ukraine and mounting economic sanctions from the West against Russia, Egypt finds itself torn between the West and Moscow. It is bound to both by deep economic and strategic interests.

At first, Egypt was reluctant to explicitly condemn the Russian invasion of Ukraine and instead called for diplomatic solutions and a political settlement to the crisis, prompting the G7 ambassadors and the European Union ambassador in Cairo to issue a joint statement on March 1 pressing the Egyptian government to stand with Ukraine.

The next day, Egypt along with 140 other countries voted in favor of a UN resolution calling on Russia to immediately end its aggression against Ukraine. Egypt’s permanent representative in New York, Osama Abdel-Khalek, gave Cairo's reasons for the vote and voiced his country’s rejection of economic sanctions against Moscow.

Timothy Kaldas, a policy fellow at the Tahrir Institute for Middle East Policy, told Al-Monitor that Sisi is trying to come to an understanding with Putin so that his nominal endorsement of the Western position on Ukraine doesn’t endanger Egypt’s long-term relationship with Russia.

“President Sisi has worked to establish close ties with President Putin in a variety of fields ranging from energy to agriculture to arms. He has also sought to use his relations with Russia and China to assist Egypt to minimize Western pressure on Egypt over its poor human rights record and political repression,” said Kaldas.

Also, Russia's State Atomic Energy Corporation, Rosatom, is currently building a nuclear power plant in Egypt’s Dabaa in a $26 billion project. A Russian industrial zone in the Suez Canal Economic Zone is scheduled to being constructed this year and is expected to attract about $7 billion in investments.

“Since 2013, Egypt has decided to diversify [its weapons sources] away from US-made military equipment. Against that backdrop, Moscow emerged as a reliable arms supplier to Cairo,” Mohammed Soliman, a non-resident scholar at the Middle East Institute, told Al-Monitor.

Soliman said that Cairo's close military and economic ties with Moscow will be detrimental to Egypt's interests if Russia becomes a pariah state, so Cairo doesn't plan to pick sides in the war.

"Egypt has strong military, security, and economic relations with both Moscow and Washington. Cairo knows it has to walk a fine line between the two global superpowers in order to not jeopardize Egypt's national interests,” Soliman noted.

Egypt's state grains buyer, the General Authority for Supply Commodities, has canceled two wheat supply tenders since the start of the war due to high prices and lack of bids. Two shipments are currently stuck in Ukraine amid the closure of shipping ports.

Egyptian government spokesperson Nader Saad said Mar. 8 that Egypt will receive a Russian shipment of wheat during March under a deal concluded before the crisis, without specifying the quantities to be supplied.

Meanwhile, Russian wheat shipments to Egypt are expected to encounter difficulties related to payment, after Russian banks were excluded from the SWIFT system as part of the sanctions imposed by the West.

Egypt is expected to incur an additional 12-15 billion Egyptian pounds ($763-$954 million) in excess of its budget allocations for the current year due to the 50% wheat price hikes in international markets.

The Egyptian government has reported that it has a stockpile of wheat that is sufficient for four months and that Egypt's local crop will provide the equivalent of an additional four months.

Kaldas pointed out that the Ukraine conflict has created several challenges for Egypt, which would like to maintain a degree of neutrality with respect to Russia’s invasion of Ukraine but may struggle to do so. “The Achilles' heel of Egyptian foreign policy independence is its financial weakness due to years of economic mismanagement,” he said.

Since 2016, as part of its economic reform plan, Egypt has secured tens of billions of dollars of financing from Western-controlled international financial institutions like the International Monetary Fund and the European Bank for Reconstruction and Development.

Kaldas noted, “This is support Russia cannot replace. The shareholders of these institutions can impose far stricter conditions on future loans and investments for Egypt while reducing the scale of their financial support.”

“It ultimately will make it difficult for Egypt to resist Western demands to side against Russia’s invasion if the West is willing to use its leverage to force Egypt’s hand,” he concluded.