Leading efforts for Israel to join the International Energy Agency, Energy Minister Karin Elharar is in Paris discussing ways to confront the challenges of the current global crisis. 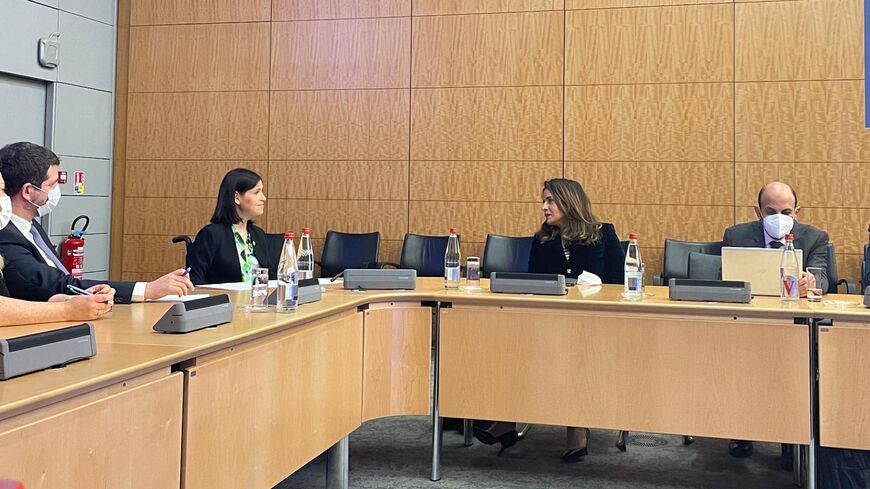 PARIS — Israel’s Energy Minister Karine Elharar is participating today and tomorrow in the ministerial meeting of the International Energy Agency (IEA) in Paris, “Accelerating Global Action on Clean Energy and Energy Security.” Israel is in the process of joining this group, established a few years ago by members of the Organisation for Economic Co-operation and Development.

Haim Assaraf, Israel’s ambassador to the OECD and other multilateral organizations, has been leading the process in cooperation with the Energy Ministry. Under his leadership, Israel has developed excellent working relations with the OECD and joined the Paris-based Global Partnership on Artificial Intelligence. The same can be expected with the IEA. Israel, the startup nation, has a lot to contribute.

“Israel is now in the final stages of joining the IEA. My presence here is the first time an Israeli energy minister has participated in the agency’s ministerial meetings. I have labored since taking office for Israel to join the IEA, the most significant international organization on energy,” Elharar told Al-Monitor. The minister explained that the goal is imminent, now only a matter of technicalities. IEA Executive Director Fatih Birol is very enthusiastic on Israel becoming a member.

This year's ministerial meeting is taking place on the backdrop of the Russia-Ukraine conflict and the global energy crisis. “It was really difficult to see the Ukrainian deputy energy minister pleading with the forum to prevent Russia from continuing to export its energy. Israel is of course helping Ukraine as much as it can, becoming the first state to set up a field hospital there," Elharar noted. She met this morning with EU Commissioner for Energy Kadri Simson, who asked Israel to help Europe on natural gas. “For Europe to ask little Israel for help, it is not something that happens every day. Of course, we will now look into ways of assisting. Not only in energy, but also in other ways, such as perhaps helping with vaccine doses for Ukrainian refugees." She also met with her Moroccan counterpart, whom she invited to visit in Israel. Elharar, at only 44, has become one of Israel’s cabinet leading ministers, engaging with her counterparts from Gulf and Arab countries on the Abraham Accords.

For Europe, the energy crisis has developed quickly. On March 17, the OECD made a grim report on the expected economic implications of the Ukrainian war. The organization's experts believe an inclusive and sustainable response is needed to confront these challenges, with the goal of cutting European dependence on Russian energy. Alternative energy development must be accelerated, exiting from nuclear energy must be postponed and the sources of fossil energy must be diversified.

Asked by Al-Monitor at a press conference how efficient these steps would be as long as OPEC continues to control and fix petrol prices, OECD Secretary General Mathis Cormann admitted that Europe is likely in for several tough years. His colleagues emphasized that Europe cannot depend on one major energy supplier, hinting that energy exports from Russia should be replaced by sourcing from one of the Gulf countries.

Israel is in a different situation. Over the past two weeks, Prime Minister Naftali Bennett held a series of meetings with representatives of the Finance Ministry, the Trade and Economy Ministry, the Energy Ministry, the Defense Ministry, the National Security Council and Israel Bank to evaluate Israel’s readiness for the coming global crisis.

The government is reportedly not worried about the expected global shortages of wheat and of fossil fuels. Following the 1973 Yom Kippur War and that era's energy crisis, Israel built a system of depots across the country to store wheat, other grains and petrol that should keep the country going for several weeks, at least. Another encouraging element is that Israel is itself a natural gas producer, with the two undersea gas fields Leviathan and Tamar. The natural gas that Israel does import is guaranteed in contracts at a fixed price for several years to come.

Israel is more worried about the long term, with the global rise in cost of living, as 20% of Israel's electricity consumption is produced with coal, mostly purchased from Russia. Israel has not officially joined sanctions against Russia, though it has imposed sanctions on some banking operations. If Europe sanctions Russian energy, it's unclear whether Israel will join in. In any case, like other European countries, Israel could purchase coal from other sources, but the price will surely be higher. Another consideration is that Russian coal is considered of especially good quality. Coal from other sources will be of lower quality and more polluting.

Elharar said that 20% of Israel’s electricity being dependent on coal could be worse, " and in any case, we are advancing a plan to rid Israel of using coal completely by 2025. We have already developed a plan to recondition electricity plants to function with gas."

“Israel has marine gas fields that it is currently exploiting will continue to exploit for dozens of years to come. We supply ourselves and we also export. We don’t really have a gas problem, even now. We have two gas fields that are operating, and a third one — Karish/Tanin — will become operational this coming summer. Where we are limited is distribution. We are now exporting to Jordan and to Egypt, but are examining ways to transport gas to Europe as well."

Over the past few years, Israel has been developing the EastMed undersea pipeline to transport natural gas from the Mediterranean Basin to the south of Europe. The project is now awaiting feasibility studies. There are also other solutions. One transportation option could be for Egypt to liquify the natural gas extracted in Israeli marine fields so it can we sent to Europe by boat.

“As energy minister, my job is to guarantee that Israel has no energy-supply problems. We have gas for many years to come, but even our gas fields will dry out one day. And what’s more sustainable than wind and sun, of which we have plenty in Israel? With my office, I’ve been working to guarantee Israel’s energy security so that we will have energy sources not just for the short term, but for the long term. Israel made the commitment of zero CO2 emissions by 2050. One important way to reach this goal is renewable energies. We have set as a medium goal that by 2030, 30% of our energy sources would be renewable ones, so we are working on many solutions. Some, like green hydrogen energy, are not yet sustainable economically, but we are advancing on that, as we advance on other solutions not yet made public."