Israel was added today to the Global Partnership on Artificial Intelligence, joining 19 an alliance of technologically advanced democratic countries. 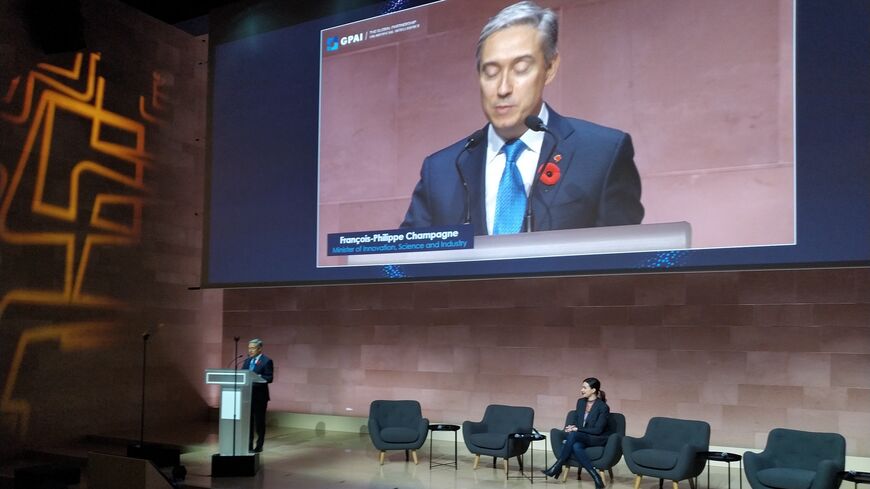 PARIS — Israel joined the Global Partnership on Artificial Intelligence today, Nov. 11, becoming the 20th member of the organization created two years ago under French and Canadian leadership. Four other countries were also accepted into the organization and four countries saw their candidacy rejected, at least for the moment, at the GPAI's annual event. The GPAI headquarters are located within the OECD in Paris, with another hub in Canada.

Renaud Vedel coordinates France’s national artificial intelligence strategy. He explained to Al-Monitor that the organization is made up of countries with advanced artificial intelligence technologies that believe in the values of equality and democracy promoted by the OECD. "Artificial intelligence has been a much-debated topic worldwide, also generating fears. These technologies bring about very positive impacts and possibilities, but are also quite complex and could be sensitive to society. And so the states wanted to have a multi-stakeholder initiative that could advise them and make recommendations," he said. Israel, he noted, will surely contribute positively to the group.

Baroness Joanna Shields, former British minister for internet safety and security, serves as chair of the GPAI’s Multi-Stakeholder Experts Group Plenary and co-chairs the GPAI’s steering committee. "I am well familiar with Israeli high-tech, so I can tell that it is always at the forefront of technology. With advances in the domain of artificial intelligence, the GPAI is the recognition of the need for international cooperation to respond to what we did not do in the last technology revolution. If you look at the last decade of the evolution of social media and the harms being committed, these are the unintended consequences of not being organized and focused on thinking through the possibilities." She explained that the organization promotes exchanges between different stakeholders such as scientists, private companies and civil societies, in a healthy dynamic. She and her colleagues expect Israel to engage from all of these angles.

Israel’s Ambassador to Multilateral Organizations in Paris Haim Assaraf is intimately familiar with the GPAI and has been laboring for several months for Israel's inclusion. He told Al-Monitor, "I am happy we succeeded in joining this important partnership, after efforts both by me personally and by the Israeli delegation in Paris to multilateral organizations. We were all engaged in pushing Israel’s candidacy forward. Cooperating on new technologies, artificial intelligence among them, is of outmost importance to Israel and to the world, be it on the level of research or on formulating international norms. As a global leader in the domain of artificial intelligence, Israel has a lot to contribute to this partnership and a lot to learn as well from GPAI member states’ experience. We shall all benefit from working jointly."

Assaraf noted that Israel's Ministry of Trade and Economy and Ministry of Science had worked to advance the country's candidacy and that Science Minister Orit Farkash Hacohen addressed the issue while visiting Paris last week.

According to Assaraf, Israel is ready to engage immediately in meetings for scientists about joint research projects, in meetings for national officials working on international norms and ethics, and in an open GPAI forum that encourages creative thinking in the domain of artificial intelligence. He says that his team at the embassy together wish the relevant ministries have already come up with several ideas they would like to propose to the GPAI.

Assaraf's enthusiasm was met today with equal enthusiasm by the GPAI's political leadership. Canadian Minister of Innovation, Science and Industry Francois-Philippe Champagne chairs the GPAI 2021-2022 council. He told A-Monitor, "Obviously it’s a good thing that Israel is joining us. It brings diversity. I am familiar with Israel, its capabilities and its vision, having participated in the talks for renewing our free trade agreement. So I am sure that we can work very well together. Certainly, within this family, within this great partnership, we see Israel as a partner we trust for our next moves and projects on artificial intelligence."

France's Digital Transformation and Electronic Communication Secretary Cedric O will take over the organization’s chairmanship next year. O congratulated Israel on joining the GPAI and told Al-Monitor that this partnership is an alliance of technologically advanced democratic countries, a circle Israel is certainly part of.