Israel preps for wave of immigrants from Ukraine

A senior cabinet minister says a pending nuclear agreement with Iran is "terrible news" and "Israel will be the one paying the ultimate price." 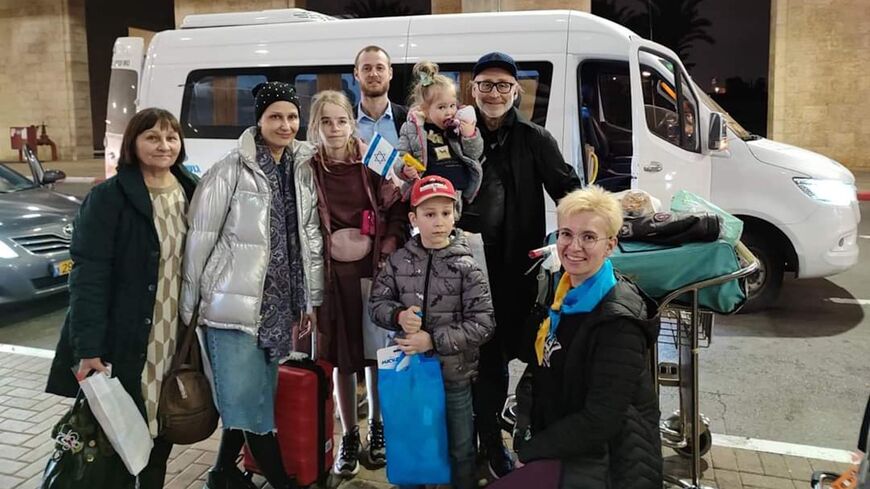 A first family of Jewish immigrants from Ukraine, fleeing their homeland, arriving at the Kfar Eldad community in Israel, March 4 2022. - Public relations office of the Gush Etzion Regional Council

Israel continues to be torn between Russia and Ukraine, between the United States and Russia and between defending itself against Iranian entrenchment in Russia-backed Syria and a moral commitment to a European democracy.

Normally, Israel’s affiliation with the free, democratic West is beyond doubt, but these are not normal times. While Russian forces are trampling Ukraine, other Russian military units are deployed just beyond Israel’s northern border, potentially risking its ongoing operations to uproot Iran’s military presence in the region. Israeli Prime Minister Naftali Bennett spoke this week with Russian President Vladimir Putin and twice with Ukrainian President Vlodymyr Zelenskyy, trying to make the best of a horrible situation without much to show for his efforts so far.

Construction and Housing Minister Ze’ev Elkin embodies Israel’s dilemma. A former Likud stalwart, Elkin quit the ruling party in December 2020 along with fellow Likud veteran Gideon Saar to form the New Hope Party. Elkin is considered one of the most experienced figures in Israel’s rough-and-tumble political arena. Born in Kharkiv, Ukraine, then part of the Soviet Union, he was hounded as a young dissident by the KGB until immigrating to Israel in 1990. This week, he watched photos of the disaster unfolding in his hometown and prayed for his brother and his family who still live there and are in danger.

At the this week's meeting of the foreign affairs and security cabinet, Elkin delivered an impassioned speech, accusing the government of which he is a member of failing to prepare for the consequences of the war in Europe because it did not believe Putin would invade. The government did not draw up contingency plans to extricate the Jewish populations of Ukraine’s four major cities ahead of time and is now unable to help them get out, Elkin charged.

Elkin is considered a Putin expert, having been at the side of former Prime Minister Benjamin Netanyahu at all his official and less official meetings with the Russian leader since 2009. He also accompanied Bennett for his first meeting with Putin in Sochi last October. Serving as an interpreter at the meetings sitting next to Putin, Elkin had the opportunity to study him closely. Elkin, a hawk on security issues who understands Russia’s importance to Israel in Syria, is now torn between his homeland Ukraine and Israel’s need to avoid antagonizing the country threatening to destroy it.

Over a million Russian-speaking Israelis who emigrated since the fall of the Soviet Union, have raised families in Israel and also left relatives behind are experiencing similar anguish. The vast majority have taken Ukraine’s side, but that support is of little help to Zelenskyy, who made a biting comment about Bennett during a March 3 news conference in Kyiv. “I saw a nice picture of Jews covered in Ukrainian flags near the Western Wall. They prayed and I thank them for that. We have good relations with the Israeli leadership, but things are tested in a time of trouble. I didn’t feel that the Israeli prime minister was covered in our flag,” he noted.

The war in Europe has additional implications for Israel. Some of the most important concern the negotiations in Vienna between world powers and Tehran over the fate of Iran’s nuclear program. Israel has updated its assessments with the fighting, which may greatly increase the odds of a final agreement being reached. “This is terrible news for us,” a senior cabinet minister told Al-Monitor on condition of anonymity. “We understand the significance of the matter and are following with grave concern the connection between the war in Europe, the skyrocketing fuel costs and the West’s need for as much Iranian oil as possible to ease global demand and reduce prices. Israel will be the one paying the ultimate price.”

Reports emerging from Vienna that Western sanctions on Iran will be lifted immediately and perhaps “radically,” as a senior Israeli diplomatic source described it to Al-Monitor on condition of anonymity, are heightening Israel’s concerns. “They are considering lifting the sanctions on the Iranians responsible for terror attacks on Jewish targets in the United States, on the Revolutionary Guards, on elements associated with Iran’s destructive activities in the Middle East,” the source said. “This is simply issuing them a license to kill.”

What will Israel do in response? Not much. “The days of the war Netanyahu declared on [US President Barack] Obama will not return,” another senior Israeli diplomatic official told Al-Monitor on condition of anonymity. “But we will not hesitate to state our opinion, to keep reiterating that any agreement reached is not binding on us and that we will keep fighting against the Iranian nuclear program with all the means at our disposal.”

The war in Europe may also have some positive repercussions, from Israel’s standpoint. There is potential for a significant Jewish immigration wave from Ukraine and Russia.

“These Jews' world is crashing around them at this very moment,” Knesset member Zvi Hauser, chair of the Foreign Affairs and Defense Committee, told Al-Monitor. Hauser, of the New Hope party, has been pressing the government to bring them to Israel. “This war is here to stay and even on the day after, it will be very tough for the Jews to return to their previous lives in Moscow, Kyiv or Odessa. We must take advantage of this unique opportunity.”

Some 30 years ago, in the wake of the Soviet empire’s collapse, a massive wave of immigrants greatly expanded Israel's population of less than 6 million. Those immigrants have had a profound impact on life in Israel and brought a reservoir of skilled and highly educated labor and a powerful impetus that still resonates. Many economists believe that the influx of engineers, doctors, scientists, physicists and mathematicians played a significant role in turning the country into the start-up and high-tech power it is today.

Interior Affairs Minister Ayelet Shaked is well aware of this new potential. “Between 100,000 and 200,000 Jews could immigrate to Israel in the coming months,” she told Al-Monitor. “We have to prepare for this as quickly as possible. This is a historic event of paramount importance.”

Israel was established after the Holocaust as a safe haven for Jews wherever they may be. The latest events in Europe highlight this historic imperative, which spawned the Zionist movement and the State of Israel in its wake. This is a crucial test for the Jewish State, which will do everything it can to live up to its promise.