Iranian Foreign Minister Hossein Amir-Abdollahian’s Tuesday visit to Moscow could have played a part in Russia backing down from its original maximalist demands. 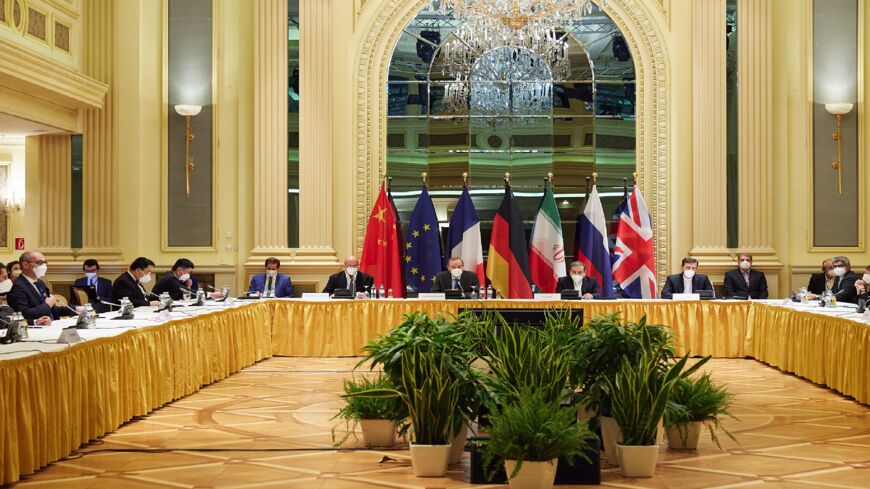 Representatives of the European Union, Iran, Russia, China and others attend the Iran nuclear talks at the Grand Hotel on April 15, 2021, in Vienna, Austria. - EU Delegation in Vienna via Getty Images

Anyone hoping for resumed limits on Iran’s nuclear program and resumed Iranian international trade can breathe a sigh of relief that the 2015 accord, known as the Joint Comprehensive Plan of Action (JCPOA), appears likely soon to be revived. What last week had looked to be a Russian wrench dropped into the gears of negotiations on Tuesday became little more than sand — irritating, but not debilitating — as Moscow apparently backed down from over-reaching demands.

On March 5, in the context of Western sanctions over the invasion of Ukraine, Russian Foreign Minister Sergey Lavrov had insisted that negotiations in Vienna on the JCPOA must protect Russian trade and investment links with Iran. He wanted “guarantees at least at the level of the secretary of state.” Russia’s chief negotiator in the talks, Mikhail Ulyanov, said on March 9 that since negotiations had not concluded, Russia had the right to raise new concerns.

As with other Russian demands concerning Ukraine, this was a maximalist position. And an unreasonable one. Moscow surely knew that asking to be allowed to conduct unfettered commerce with Iran would be unacceptable to every Western party to the talks. It also knew that impeding negotiations in this way would offend Iran, one of Russia’s only remaining friends.

But some Russians may have thought that stalling the Iran talks would help Russia economically by keeping a large portion of Iranian oil off the market, thereby increasing the profit from Russia’s own sales. The Kremlin also sees benefit in the United States continuing to be saddled with the headache of an antagonistic near-nuclear Iran.

Until this month, Russia had generally been a responsible and helpful player in the JCPOA saga, both in the negotiations leading up to the July 2015 deal and in the past year of efforts to bring it back to life. Moscow wanted to prevent Tehran from developing nuclear weapons, because of both geostrategic concerns given Iran’s proximity (bordering three former Soviet states) and the dilution that expansion of the nuclear club would mean to Russia’s relative power. Russia also had a commercial reason to limit Iran’s nuclear fuel cycle activities, so that this work could be done by Rosatom and its subsidiaries for profit.

When Russia first raised the Ukraine-related sanctions in the Iran talks and demanded an exemption for itself, it meant guarantees that its nuclear work under the deal would be protected. This work involved, for example, converting centrifuges at Fordow to not produce enriched uranium and providing fuel for the Tehran Research Reactor.

A demand limited to undertakings in the 2015 accord would not be a showstopper. The 2015 nuclear deal had granted waivers for Russia’s nuclear cooperation with Iran, and even after former US President Donald Trump withdrew from the deal in May 2018, Russian involvement in nonproliferation-related nuclear work in Iran initially remained permissible for up to two years. Such permission easily could again be granted, as the US State Department spokesman on March 15 reassured: "We would of course not sanction Russian participation in nuclear projects that are part of resuming full implementation of the JCPOA. We cannot provide assurances beyond that to Russia."

Fortunately, Russia changed its position for the second time in a week and reverted to its original, limited request for a guarantee. Some credit is due to Iranian diplomacy, including Foreign Minister Hossein Amir-Abdollahian’s visit to Moscow on March 15. He came with both the JCPOA and Iran-Russia relations on track.

Even if Russia had not backed down, the JCPOA talks could have resumed without Russian participation. It would be possible, albeit politically challenging, to complete the JCPOA restoration without Russian involvement. For example, France could receive the excess enriched uranium that Iran would have to ship out of the country to return to the 300-kilogram limit stipulated by the JCPOA. France had tentatively been willing to do this back in 2009 under the terms of a fuel-swap arrangement that went awry. Kazakhstan, which has the appropriate facilities, also could be asked to down blend the enriched uranium.

How important it is to Iran to restore the JCPOA is not entirely certain, because opinions in Tehran are divided. On the one hand, policymakers want the sanctions lifted; on the other hand, they distrust how long the benefits will last in light of Trump’s withdrawal and the promise of Republicans to do it again if their party regains the White House. One argument is that maintaining solidarity with Russia is more important in the long run than short-term sanctions relief. Moreover, Iranians want to keep the capability of being close to a nuclear weapon; the only debate is over how close and — increasingly — whether to take the final step of producing them.

Now that Russia has withdrawn its demands for a wider exemption from economic penalties over its invasion, Iran will likely continue to insist on more sanctions relief of its own. It wants all Trump-era sanctions lifted, including those properly adopted for reasons of missile activity, human rights violations and support for terrorism. Iran has a debating point, because many of the blacklist designations were applied with the openly broadcast ulterior motive of preventing a future president from rejoining the nuclear deal. But many of the sanctions were legitimate and have no connection to the nuclear deal.

Since both Iran and the United States have stated similar variations of the principle that those sanctions that impede implementation of the economic benefits to Iran of the JCPOA should be lifted, it should not be too difficult to reach a final agreement on restoring the deal. News that British-Iranian dual citizens Anousheh Ashouri and Nazanin Zaghari-Ratcliffe are to be freed adds to anticipation that a deal is in hand.