Two Iranian-British citizens are on the way home after the United Kingdom settled a decades-old debt to Iran. 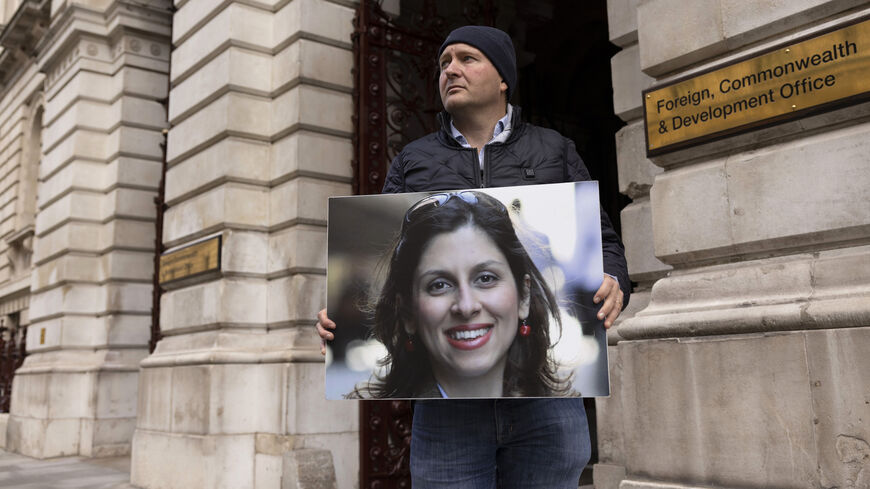 Richard Ratcliffe protests outside the Foreign Office while on hunger strike, part of an effort to lobby the UK foreign secretary to bring his wife home from detention in Iran, on Oct. 25, 2021, in London, England. - Dan Kitwood/Getty Images

Two Iranian-British citizens who have been imprisoned in Iran were released this morning and are heading back home. Early reports were confirmed in a tweet by British Foreign Secretary Liz Truss.

Iran’s Fars News Agency reported that the United Kingdom had repaid a debt of about $530 million to Iran, owed in relation to a 1976 arms deal. The United Kingdom had been reluctant to pay the money due to US sanctions and fear of secondary sanctions from the US Treasury. The debt has been a source of contention between the two countries.

Zabiollah Khodaian, a spokesman for Iran’s judiciary, said that Zaghari-Ratcliffe had served her four-year prison term and this is the reason she was permitted to leave the country. He also said Ashoori had served four years of his 10-year sentence. Regardless of the details of their cases, it was clear to most Iran observers that the two were being detained as leverage over the debt.

The deal also suggests that the United States likely gave the green light to release the money as an agreement nears on reviving the 2015 nuclear deal. Iran's Foreign Minister Hossein Amir-Abdollahian was in Moscow yesterday and standing alongside his Russian counterpart Sergey Lavrov, told the media that Washington has given guarantees that Iran-Russia trade would not be impacted by the latest sanctions on Russia over its invasion of Ukraine.

There are a number of other dual nationals still held in Iran and family members are hoping for news about them soon. Morad Tahbaz, a 66-year-old businessman detained in 2018, holds American and British citizenship. An IRNA report stated that “according to rumors,” he was also released in addition to Zaghari-Ratcliffee and Ashoori. However, the agency quickly deleted that portion of the report without addressing the removal.

The highest-profile Iranian-Americans still detained by Iran are Siamak and Baquer Namazi. Siamak was detained in 2015 and his father Baquer in 2016 after he was permitted to enter Iran and visit his son.