Iran may return to the table in a few weeks, but expect it to continue waiting for the United States to make concessions. 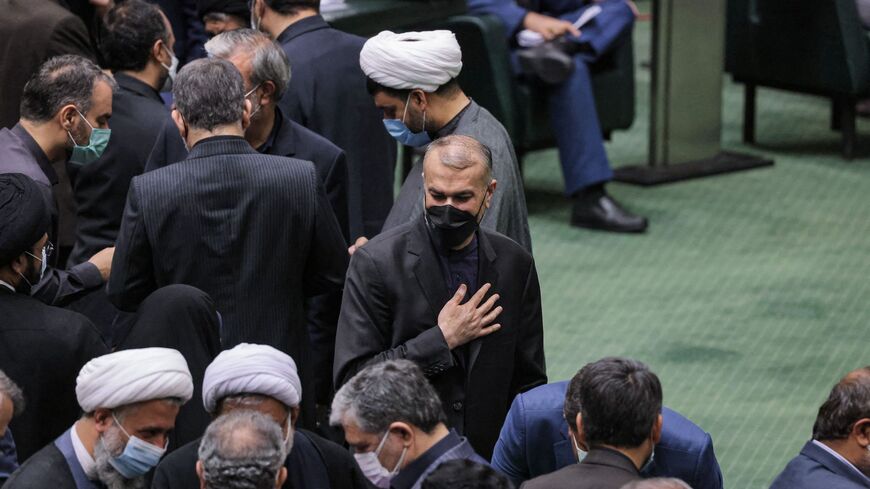 Hossein Amir-Abdollahian, then conservative candidate for foreign minister, looks on during a parliament session to review the new president's cabinet selection in the capital Tehran on Aug. 21, 2021. - ATTA KENARE/AFP via Getty Images

Anyone hoping for quick progress in talks to restore the Iran nuclear deal would find little reason for cheer in the posture adopted by Iranian Foreign Minister Hossain Amir-Abdollahian.

In meetings with journalists and analysts in New York last week, the new face of Iran’s foreign policy, from an American perspective, demanded too much and offered too little.

According to participants, the six rounds of talks in Vienna were close to success, with only a few key issues awaiting compromises for an agreement to resume full implementation of the JCPOA.

In a July 12 report to the Iranian parliament, former Iranian Foreign Minister Mohammad Javad Zarif laid out the compromises to date and encouraged the new government to pick up where he had left off.

Amir-Abdollahian shows no indication of following Zarif’s advice. When pressed in a meeting with analysts on whether Iran would return to where the talks left off on June 20, the minister said, “The United States could easily return to the state of play when it exited the JCPOA” in May 2018 — meaning that lifting all sanctions imposed since then would leave no need for further negotiations.

He disagreed that the previous rounds of talks had been fruitful, saying that they had produced no tangible results and Iran needs to see concrete US actions in returning to its commitments, not “negotiations for the sake of negotiations.”

Iran may return to the table in a few weeks but continue waiting for the United States to make concessions. Among other things, Washington is expected lift all sanctions imposed since 2016, demonstrably verify that trade constraints are lifted and ensure that a future US president will not again change course on the JCPOA. Amir-Abdollahian implied that Iran’s new administration would likely seek more.

Amir-Abdollahian’s hostility toward the United States is thinly veiled. While acknowledging that former President Donald Trump formally pulled the United States out of the JCPOA in 2018, the foreign minister assigns almost equal blame to Trump’s predecessor and successor. In his telling, President Barack Obama was the first to violate the JCPOA to keep Iran from reaping its benefits, and Joe Biden has continued Trump’s policy with new sanctions.

Left out of this narrative is the reason for the sanctions imposed on Iran this past year. The highest profile were on Iranian intelligence operatives who plotted to kidnap New York-based Iranian journalist Masih Alinejad. Tehran’s logic holds that any US pushback against nefarious actions represents a betrayal.

Similarly, Iran demands that all sanctions imposed by the Trump administration, including those for human rights violations such as the killing of hundreds of protesters in November 2019, must be lifted before Iran will consent to restoring its commitments to the JCPOA. The Biden administration is willing to lift all Trump-era sanctions that were imposed in contravention of the accord and that would impede its implementation, but Iran’s demand that all 1,600 or so Trump sanctions be lifted is to ask for changing the terms of the deal. Meanwhile, Iran rejects US requests for follow-on talks to make the deal “longer and stronger.”

The "maximum pressure" policy of the Trump administration utterly failed in its stated intention to change Iranian behavior. Not one of the 12 demands of former Secretary of State Mike Pompeo was met.

Yet Iran seems intent on using its own version of maximum pressure. On the nuclear front, it has drawn nearer to being able to produce nuclear weapons than ever before, according to the British government. Most worrisome is the enrichment of uranium to 60% fissionable isotope U-235, production of uranium metal (useful for little other than bomb cores) and use of faster centrifuges than allowed by the deal, all to advance a nuclear hedging strategy to pressure the United States. At the same time, Iran continues to evade efforts by the International Atomic Energy Agency to investigate apparent cases of unreported nuclear activity that left traces of man-made uranium.

On other fronts, Iran continues to hold four US-Iranian dual nationals on unsubstantiated charges. Iran claims it agreed to an exchange of prisoners months ago, also involving UK dual national Nazanin Zaghari-Ratcliffe (with the United Kingdom as the intermediary), but that the day before the exchange was to have been implemented Washington insisted on waiting until the issue could be addressed in the Vienna negotiations. Incomplete though this narrative is, Amir-Abdollahian told British Foreign Secretary Liz Truss in New York that Iran was ready to return to the prisoner exchange.

Left unspoken in Iran’s telling is that it wants not just a swap of captives, but a release of some of Iran’s frozen assets as well.

If there is to be a way forward, humanitarian actions could provide the key. Prisoners could be exchanged on humanitarian grounds. Separately, the United States should make a unilateral gesture on humanitarian grounds to see that the exemption for medical supplies built into US sanctions regulations is actionable in practice. Surely the US Treasury can find a way to facilitate international financial services that would allow Iran to import the medical supplies that the Iranian people desperately need.

Amir-Abdollahian’s strongest talking point in New York was the US role in contributing to Iran’s health crisis. Releasing some frozen funds for medicinal purchases, as has been suggested by various parties, would be a powerful goodwill gesture. Defanging accusations on this subject would also benefit US public diplomacy and a global image that is in need of burnishing. While a positive outcome to the Vienna talks does not appear likely in the near future, progress may be possible on a smaller scale. It would be easier to address concerns about humanitarian trade, however, if Iran were willing to talk directly with the United States. Diplomacy requires flexibility on both sides.