Iran says US must make 'political' decision to rejoin deal

Both Iran and the United States are portraying each other as being opposed to making political concessions. 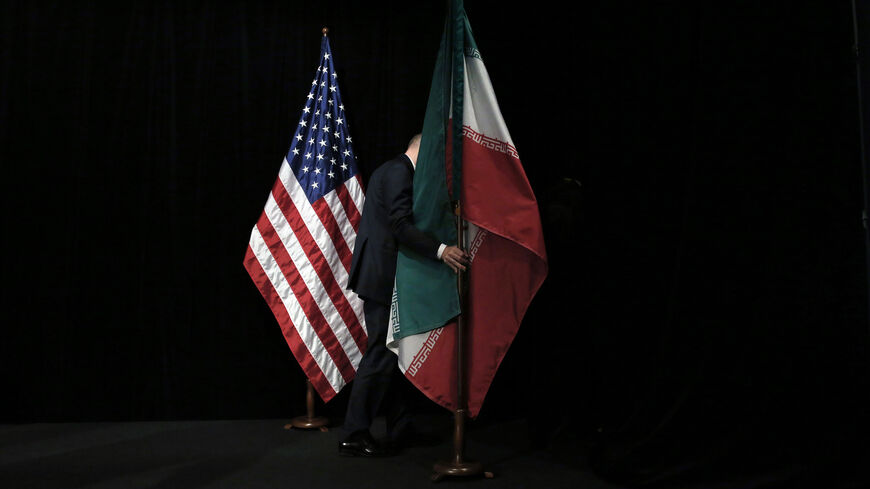 A staff member removes the Iranian flag from the stage after a group picture of foreign ministers and representatives of Unites States, Iran, China, Russia, Britain, Germany, France and the European Union during the Iran nuclear talks at Austria International Centre in Vienna, Austria, on July 14, 2015. - CARLOS BARRIA/AFP via Getty Images

The eighth round of negotiations to get Iran and the United States back into the 2015 nuclear deal began in Vienna yesterday with a bilateral meeting between Iranian and European Union officials.

An Iranian official described as being “close to the negotiation team” told Tasnim News Agency that “Iran has made its political decision” regarding the current negotiations. He added, “The biggest obstacle is the lack of political decision by the US. The US should be concerned about losing this opportunity.”

Ali Shamkhani, secretary of Iran’s Supreme National Security Council, has been actively tweeting about the negotiations and making similar comments about the United States. He tweeted today, “Voices from the US government show that there is no coherence in the country to make political decisions in the direction of advancement in the Vienna talks. The US administration can not pay for its internal disputes by violating Iran’s legal rights.”

Yesterday Shamkhani tweeted about the importance of lifting sanctions, writing, “Previous experience has shown that without effective lifting of sanctions, sustainable economic benefits from JCPOA are like an illusion.” In another tweet he accused the Biden administration of continuing with former President Donald Trump’s tactic of “maximum pressure."

Iran is seeking the removal of sanctions that Trump reapplied when the United States exited the Joint Comprehensive Plan of Action in 2018. Washington is seeking Iran’s return to full compliance with the terms of the JCPOA. In addition to the original deal, Iran seeks a guarantee that the United States will not leave it again once there is a new US administration and reapply sanctions. The nature of sanctions on Iran are at the discretion of the US Treasury, which takes orders from the administration. Republican lawmakers have already expressed their opposition to renewing the deal with Iran and a Republican president could be elected in 2024.

The United States and Iran have each been attempting to portray the other side as the the unwilling partner in the talks. The United States is not technically in the deal and unlike in 2015 when it was signed, there are no direct talks between Iran and the United States. In a closed-door meeting with members of parliament, Iranian Foreign Minister Hossein Amir-Abdollahian assured parliamentarians, “We will not negotiate directly with the US; we are working to remove a maximum of sanctions.” According to a parliamentarian official, Amir-Abdollahian said that Iran’s focus is on being able to “verify sanctions removal and guarantees from the other side.”

The talk of guarantees only regards a potential US exit. Much of the indirect negotiation between Iran and the United States is being done via the United Kingdom, Germany and France, or E3. When the Iranians talk about the other side, or even the United States, they sometimes refer to “Western countries,” lumping the United States, Germany, France and United Kingdom together. In a recent phone conversation with Russia’s Foreign Minister Sergey Lavrov, Amir-Abdollahian said, “Without realism from the West and tangible and real actions, progress in the nuclear negotiations will not be accelerated.”