Iran insists that it wants the original terms of the nuclear deal fully implemented. 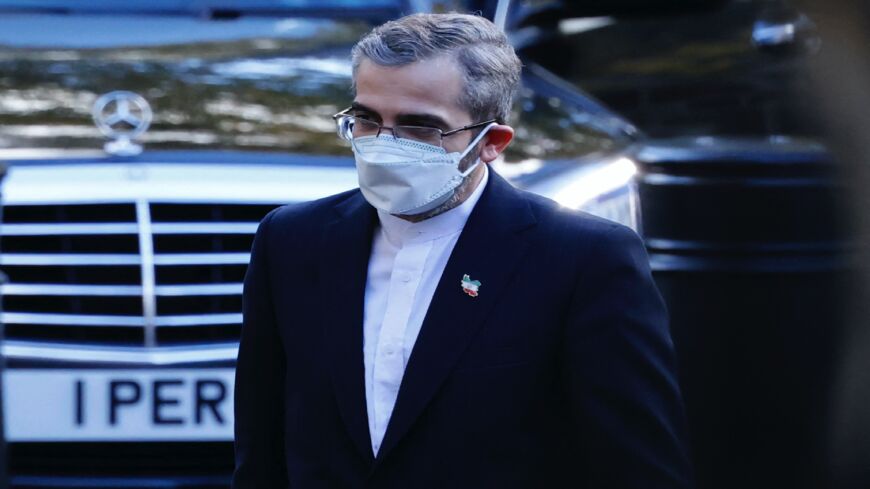 Iranian diplomat and political deputy at the Ministry of Foreign Affairs of Iran Ali Bagheri Kani arrives outside the Foreign, Commonwealth and Development Office in London on Nov. 11, 2021. - TOLGA AKMEN/AFP via Getty Images

Iran and the world powers are set to resume the nuclear talks Dec. 9. Following last week’s talks in Vienna, the first in five months, officials returned to their capitals for consultations.

Iranian Foreign Minister Hossein Amir-Abdollahian wrote in a Russian paper ahead of these talks that “the window for negotiations will not remain open forever.” The article was summarized in Iranian media outlets. Abdollahian’s message was specifically directed at the United Kingdom, France, Germany and the United States. While Washington is not directly part of these talks due to their 2018 exit from the nuclear deal known formally as the Joint Comprehensive Plan of Action (JCPOA), they are essentially being represented by the three European countries.

Amir-Abdollahian wrote that Iran is seeking the “full implementation” of the JCPOA. He continued that while the country seeks the “removal of illegal US sanctions,” they are taking steps to “neutralize the impact” of sanctions on their country. When the United States exited the 2015 deal, it reapplied sanctions. In response, Iran took steps away from the terms of the deal but remained in it.

Ali Bagheri Kani, the lead negotiator for Iran, visited Moscow after last week’s talks for consultations. He said that Iran is waiting for “actionable steps” by the West, meaning the United States, the UK, France and Germany. While in Moscow, he told Iranian media that Iran had consulted both with the Russians and Chinese before the previous round of talks.

After last week's talks, Western officials, in statements to media outlets, accused Iran of discarding the previous six rounds of talks. Bagheri Kani told Iranian media that was not a correct assessment of Iran’s drafts and described Iran’s two proposed drafts as a summary of the texts of the six previous rounds of talks. He said that Iran’s drafts included some revisions and amendments to the previous drafts due to their shortcomings in adherence to the JCPOA text.

Regardless of the spin of US and Iranian negotiators to their respective media outlets, it appears that the two sides are not able to provide one another with what they want. Iran is seeking guarantees that another US administration will not come and exit the deal once again as former President Donald Trump did and reapply sanctions. President Joe Biden, who wants to get back into the deal that former President Barack Obama agreed to, does not have the votes in Congress for a treaty. The original terms of the JCPOA, which was signed under the Hassan Rouhani administration, did not take into account the possible pitfalls of having a deal that is dependent on presidential executive orders to remain in place. The new Ebrahim Raisi administration is not willing to take that risk.