As Turkey warms to Israel, Ankara reiterates support for Palestinians

Turkish officials say support for two-state solution and Palestinian rights will not be sacrificed ahead of the Israeli president’s visit. 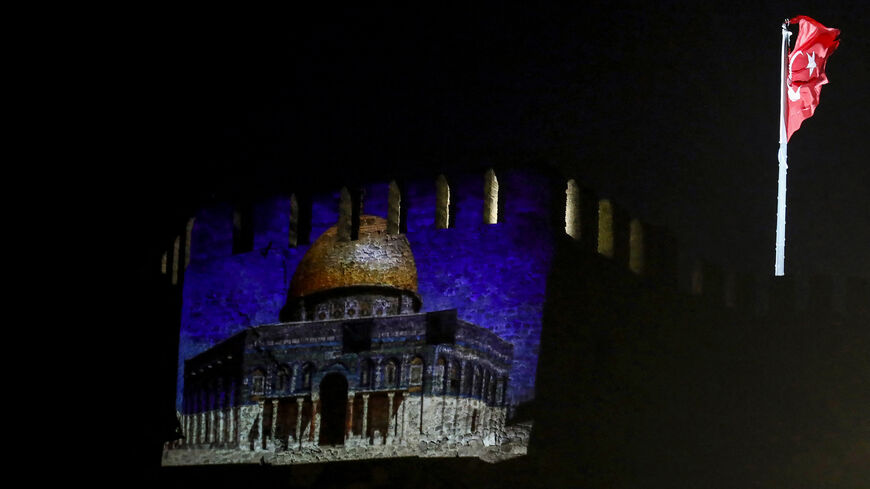 This photograph taken on May 14, 2014, shows a picture of the Dome of the Rock shrine in Old Jerusalem projected on a wall of Ankara Castle in Ankara, in support of Palestinian and to protest Israel's attacks on Gaza the Strip. - ADEM ALTAN/AFP via Getty Images

ISTANBUL — Early signs of reconciliation between Turkey and Israel have raised questions about Ankara’s support for the Palestinian cause ahead of a visit by Israeli President Isaac Herzog next month.

This week senior Turkish officials traveled to Israel for talks with their counterparts in Jerusalem.

The statement echoed earlier remarks by Foreign Minister Mevlut Cavusoglu. “Any step we take with Israel regarding our relations, any normalization, will not be at the expense of the Palestinian cause,” he said.

Turkey and Israel expelled each other's ambassadors in 2018 at the height of violent protests over the relocation of the US Embassy to Jerusalem. Scores of Palestinians were killed and Erdogan accused Israel of being a “terrorist state” that was committing “genocide.”

Jerusalem, meanwhile, has protested Turkey’s support of Hamas, which rules Gaza and is labelled a terrorist organization by the United States and Israel, which has accused it of orchestrating attacks from Turkey.

The rapprochement comes after Erdogan commented on possible cooperation with Israel. Kalin, who acts as Erdogan’s spokesperson and senior adviser on foreign affairs, said Herzog’s visit would take place on March 9.

Mithat Rende, a former Turkish ambassador to Qatar and the OECD, said the countries’ relationship had been strained since the Mavi Marmara incident in 2010, when 10 activists were killed by Israeli commandos who stormed the ship as it tried to deliver humanitarian relief to Gaza.

“It was a serious break in bilateral relations with Israel and they never fully recovered,” said Rende. “At the same time, it’s interesting to observe that relations between the two peoples and trade relations remained strong.”

Much of the commentary on Herzog’s upcoming visit has focused on the likelihood of a pipeline to deliver Israeli gas to Turkey and beyond to Europe. Erdogan said earlier this month that such a project would be on the agenda when Herzog comes to Ankara.

The prospect of a pipeline to Turkey, which largely relies on Azerbaijani, Iranian and Russian gas, emerged after last month when Washington dropped its support for a gas route to Europe via Cyprus and Greece.

Turkey strongly opposed the project and made its own claims to gas fields in the eastern Mediterranean, leading to a tense standoff with Greece and Cyprus over the summer of 2020.

The new Israeli government, which was formed in June, also offers a chance to reset after the confrontational relationship between Erdogan and former Prime Minister Benjamin Netanyahu.

Emre Caliskan, research fellow at the London-based Foreign Policy Centre, said the "animosity” between Erdogan and Netanyahu had soured relations.

Now, according to Rende, “There’s a political will on both sides to put relations on a positive track and deal with areas such as trade, energy, defense, tourism, health and climate change." He said, “They can focus on these non-controversial issues, including energy and the possibility of having a pipeline exporting Israeli gas to Turkey,” and added, “It seems the political environment for preliminary discussions on a pipeline is good. There’s an energy crisis in Europe and prices went up. The Ukraine crisis shows Europe needs to diversify and is too dependent on Russian gas.”

In November, a potential crisis between Turkey and Israel was avoided when an Israeli couple accused of spying in Istanbul were released within a week after high-level negotiations.

The Israeli press reported that Jerusalem had not set any preconditions regarding Turkey’s support for Hamas on the normalization talks.

The detente comes as Ankara is also resetting ties with regional powers such as the United Arab Emirates, Saudi Arabia and Egypt after years of discord. It also coincides with Turkey’s worst economic crisis in two decades.

Despite the promising signs of renewed bonds — the countries were close allies following the foundation of Israel in 1948 — there remains a “trust gap,” according to Rende. “Everybody’s expecting good things to happen with this visit, relations will gain momentum,” he said.

Referring to the Palestinian issue, Rende added, “When you start restoring confidence and start dialogue you don’t start with the most complex and thorny issues. The Turkish leadership should be in a position to tell our Palestinian friends that it’s also in the long-term interest of Palestine and the Palestinians to have improved relations between Turkey and Israel.”