Transparency International says there has been a “significant decline” in Turkey’s tackling of graft over the last decade. 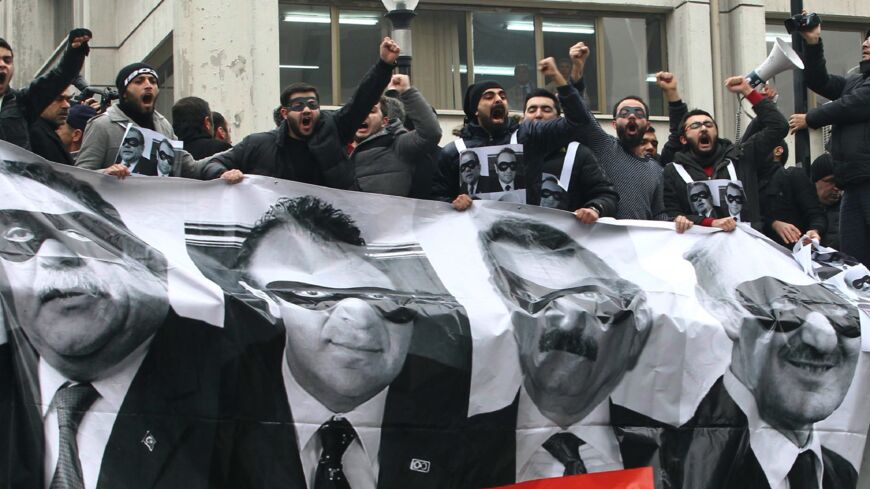 Supporters and parliamentarians of the Republican People's Party demonstrate against corruption and bribery on Dec. 17, 2014, in Ankara. - ADEM ALTAN/AFP via Getty Images

ISTANBUL — When an exiled Turkish mob boss made a series of accusations last year against figures linked to the government, including murder and drug trafficking, his claims captivated the public.

But months after posting the first of his online videos, Sedat Peker’s allegations remain to be investigated by any official agency — an indication of the dire state of anti-corruption practices in Turkey, according to experts.

Transparency International, which monitors global corruption, last week reported that Turkey had fallen to 96th of 180 countries in its Corruption Perceptions Index, scoring 38 out of 100 on a scale where a zero score indicates a highly corrupt state. The global average is 43.

A country’s score is taken from at least three data sources from a variety of reputable institutions, such as the World Bank and the World Economic Forum.

“The most important factor of Turkey’s going down in the index so dramatically is that now there is an environment in Turkey enabling corruption and not punishing such incidents,” Transparency’s Turkey chairperson Oya Ozarslan told Al-Monitor.

“There are a couple of contributing factors to this, such as impunity for corruption-related crimes, the distribution of public resources via public tender law in a non-transparent way, shady relations between politics and business, and pressure on the media and civil society to [not] even write about corruption.

“There have been so many critical claims and scandals in Turkey over the last couple of years, but the public has been waiting for their investigation in vain."

While petty corruption is believed to be on the decline due to the digitalization of services such as tax payments and real estate transactions, large-scale misconduct is abetted by a lack of legal vigor.

According to Ozarslan, “Gaps in the public tender laws … bring vulnerability to grand corruption in areas where politics have a high influence.”

Five Turkish corporations with close government ties are among the world’s top 10 for the level of public tenders they receive, according to the World Bank.

The opposition says this “gang of five” has benefited from winning contracts to build many of Turkey’s megaprojects including airports, bridges, hospitals and roads, as well as in other sectors such as energy.

They are also said to earn huge profits partly due to preferential tax breaks, leaving the Turkish taxpayer footing the bill. Meanwhile, the media arms of these corporations remain firmly supportive of the government.

The release of the Pandora Papers last year showed one construction giant moving hundreds of millions of dollars through offshore companies.

Ronesans Holding, which completed a vast presidential palace in Ankara in 2014 as well as other huge public projects, passed the funds through entities in the name of billionaire owner Erman Ilicak’s mother.

Shortly after one firm’s Swiss bank account received $105 million, a similar amount was paid out to an unknown recipient as a “donation.”

“The capture of the state in the Western Balkans and Turkey is enriching politicians and their networks at the severe cost of ordinary citizens,” Transparency’s report noted. “It is also eroding public trust in government institutions as they are increasingly being used to serve private interests.”

In other areas, Turkey has attracted international attention for its failure to tackle areas of corruption.

Last October, the Financial Action Task Force, established by the G7 advanced economies to protect the global financial system, placed the country on its “grey list” for failing to tackle money laundering and terrorist financing.

Although Ankara has moved to address some of these shortcomings, the European Commission warned that a law based on the task force’s recommendations to curb the arms trade could threaten civil society groups.

Transparency has noted the links between corruption and attacks on democratic institutions and freedoms.

The Council of Europe’s human rights commissioner two years ago called for the restoration of judicial independence in Turkey and an end to the targeting of human rights activists, lawyers and journalists through legal action.

Since then, however, Turkey has come to face sanctions for failing to implement the rulings of the European Court of Human Rights.

The independence of institutions such as the courts and police from political control is key to defeating corruption, according to Ozarslan.

“Everywhere in the world, you first need the political will to defeat corruption,” she said. “We need to see this in Turkey. There should be a system that does not enable and tolerate corruption, so change is needed.”

She added, “Relations between politics and business should be regulated and political financing and political integrity laws should be enacted, which Turkey does not have at the moment. And above all, independency of the judiciary should be guaranteed in order not to have undue political influence over judges and prosecutors.”