Ankara is facing increasing pressure to comply with sanctions imposed on Moscow and to increase scrutiny on Turkish banks to make sure they don’t violate sanctions. 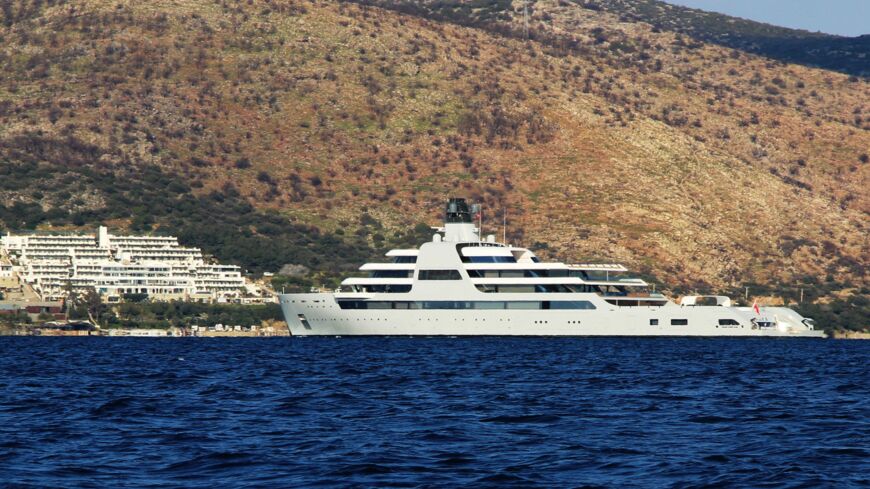 The docking of two superyachts belonging to a sanctioned Russian-Israeli oligarch at a resort in southwestern Turkey has reignited debate over the country’s role in illicit financing.

Over the past three days, Roman Abramovich’s Bermuda-registered Eclipse and My Solaris yachts anchored at marinas in Marmaris and Bodrum, respectively, amid international efforts to freeze assets belonging to Russian billionaires with links to Russia’s President Vladimir Putin.

Abramovich, who owns Britain’s premier league Chelsea soccer club, was sanctioned by the UK and is also on the European Union’s list of individuals facing asset freezes and travel bans over their association with Russia’s strongman. The Wall Street Journal reported today that Ukrainian President Volodymyr Zelenskyy had allegedly asked the White House to hold off sanctions drafted by the US Treasury Department for Abramovich because the billionaire might serve as a valuable mediator due to his close ties to Putin.

Turkey, a member of the NATO alliance and a formal candidate for membership of the EU, has not joined in on sanctions against Russia. It has instead sought to carve out a middle ground designed to keep both Russia and the anti-Kremlin coalition adequately assuaged. The question of whether this tenuous balance is sustainable or not is a matter of persistent debate.

What is not in question, however, is that Turkey provides a welcome environment for assorted fraudsters seeking to park their money, analysts say. This led to the country being grey-listed by the international anti-money laundering body, the Financial Action Task Force (FATF), in October of last year. The body said Turkey’s construction and banking sectors were of particular concern as were gold and precious stones dealers linked to terrorist financing.

Transparency International, which monitors global corruption, reported in January that Turkey had fallen to 96th of 180 countries in its Corruption Perceptions Index, scoring 38 out of 100 on a scale where a zero score indicates a highly corrupt state. The global average is 43.

Turkey has strong trade and financial ties with Russia, and there is mounting concern that Russian companies will use Turkish entities to continue conducting their overseas business.

Turkey’s recent record is hardly encouraging. Turkish state lender Halkbank was charged by a US Federal Court for its central role in facilitating a multibillion-dollar gold-for-oil scheme to evade US sanctions over Iran.

“Turkey pulling another sanctions-busting scheme would be a red line” for the United States, said Gonul Tol, founding director of the Middle East Institute’s Turkey program.

“There will be pressure on Ankara to comply with the sanctions regime and increased scrutiny on Turkish banks to make sure they don’t violate sanctions. Russian companies, entities and individuals using Turkey to get around sanctions will certainly draw more attention to Turkey’s actions,” she told Al-Monitor.

Sources with knowledge of the sanctions process speaking not for attribution point out that the United States has not yet declared secondary sanctions on third parties dealing with Russian individuals penalized for their ties to Putin, leaving Turkey off the hook for now. But that is not to say such sanctions would not be introduced in the future, the sources said.

“There is no financial scrutiny whatsoever, and the institutions that are meant to be fulfilling such functions have been filled with pro-government individuals who do as they are told,” Ozgur told Al-Monitor. Ozgur was referring to the banking watchdog, known as the Banking Regulation and Supervision Agency and the Financial Crimes Investigation Board, known as MASAK. While there are laws in place to combat financial crimes, they are not enforced, Ozgur argued.

The flow of “black money” from former Soviet oligarchs — notably from Azerbaijan, Russia, Kazakhstan and Ukraine — has increased since the failed 2016 coup and was further eased when Turkey switched to an executive presidential system in 2017 that concentrates power in the hands of Turkish President Recep Tayyip Erdogan. The system further erodes judicial checks and balances, Ozgur contended.

Senior figures of Erdogan’s Justice and Development Party have been implicated in various illicit activities as reported by the Organized Crime and Corruption Reporting Project and the International Consortium of Investigative Journalists. The collective unveiled connections between Erdogan’s family and Azeri Turkish oligarch Mubariz Mansimov Gurbanoglu who gifted a multimillion-dollar oil tanker to Erdogan’s brother-in-law.

Gurbanoglu was arrested on scantly evidenced terror charges in 2020 in a move that was widely thought to benefit associates of Azerbaijani strongman Ilham Aliyev.

More recently, fugitive mobster Sedat Peker, who is currently thought to be in the UAE, posted a series of videos alleging massive corruption among senior government figures and their offspring, including Interior Minister Suleyman Soylu and former Prime Minister and Erdogan loyalist Binali Yildirim. Peker claimed they were involved in global cocaine trafficking, rape and extortion rackets, and he shared incriminating audio recordings until the UAE muzzled him as a gesture to Ankara.

“The Turkish government’s desperate need for foreign currency in the middle of a financial crisis that depleted the country’s net international reserves could prompt Ankara to look the other way when it comes to illicit financial flows from Russia,” Erdemir told Al-Monitor.

“While the Biden administration has been overwhelmingly positive in its messaging toward Ankara since Russia’s invasion of Ukraine as part of an attempt to bring Turkey back into the NATO fold, unless Washington conveys a clear warning about sanctions, Turkey and the United States could once again find themselves on a crash course,” Erdemir added.

However, the US Congress, which has sanctioned Turkey over its acquisition of Russian S-400 missiles and invasion of northeast Syria, will be watching its actions with an eagle eye.

“I presume any major expansion of Russian financial activity in Turkish banks or expansion of energy exports to Turkey would arouse great concern both in the executive branch and Congress,” observed Alan Makovsky, among the foremost US experts on US-Turkish relations who spent long years working on the Hill.

“Israel, which also is not enforcing sanctions against Russia, has pledged not to be exploited by Russia for major sanctions-circumvention. It would be useful to hear a similar pledge from Ankara, along with a pledge to work with US officials to make certain such exploitation doesn’t occur,” Makovsky told Al-Monitor.