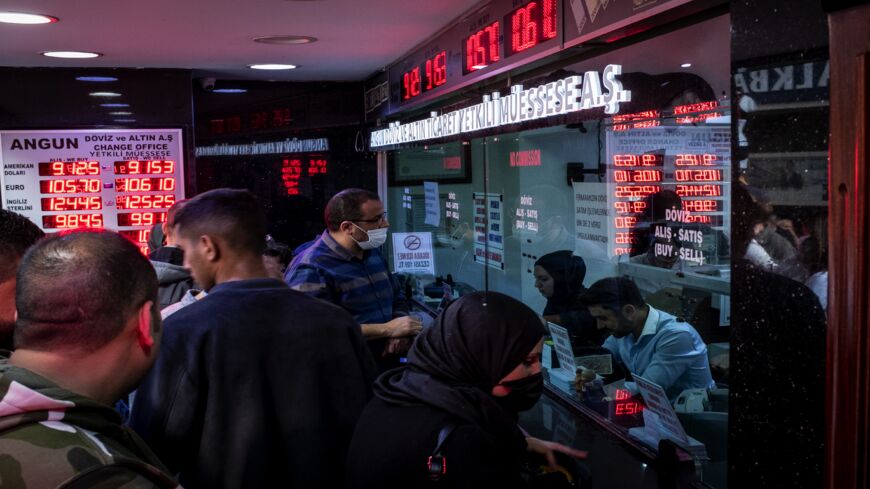 People line up to exchange money at a currency exchange office on Oct. 14, 2021, in Istanbul, Turkey. Turkey's lira dropped to a record low against the US dollar, falling as much as 1.2% to 9.18 after President Recep Tayyip Erdogan dismissed three central bank monetary policy committee members. - Chris McGrath/Getty Images

The global financial watchdog known as the Financial Action Task Force, or FATF, announced today that Turkey has been added to its “grey list” of countries subject to heightened scrutiny over terrorist financing, money laundering and institutional corruption. The move will further dent Turkey’s spotty image and likely further weaken the lira, which had already dipped to a fresh low today following a bigger than expected 2% rate cut by the central bank. Coming on top of ever-louder, anti-Western growls from the country’s authoritarian — and increasingly erratic — president, Recep Tayyip Erdogan, Turkey is beginning to look more like Iran than a valued NATO member.

The FATF said despite “some progress across all areas of concern,” Turkey had “serious issues.”

The 39-member watchdog did not specify what the issues were that thrust Turkey, along with Mali and Jordan, into the company of 22 other nations.

Turkey has been on notice for some time amid a slew of allegations implicating Erdogan’s associates in drug trafficking, oil for gold and other illicit deals with the Maduro regime in Venezuela, among other criminal activities. A 2019 report by Europol and the European Monitoring Center for Drugs and Addiction (EMCDDA) noted that Turkish organized crime groups are increasingly setting up their own operations to transport cocaine directly from Latin America to Europe.

At the same time, the US Department of the Treasury has designated seven sets of Turkey-based individuals since April 2019 for providing a range of financial and travel facilitation services to al-Qaeda, Islamic State and other terror networks.

“FATF’s grey listing of Turkey will further tarnish the country’s image as a permissive jurisdiction for illicit financial activity,” said Aykan Erdemir, senior director of the Turkey program at the Foundation for Defense of Democracies, a Washington-based think tank. “This decision will exacerbate capital flight from an economy that has experienced net capital outflows over the last few years,” Erdemir told Al-Monitor. Foreign direct investment totaled $5.7 billion in 2020 compared to a peak of $19 billion in 2007 when Erdogan and the Justice and Development Party were busy enacting democratic and financial reforms on the now blocked path to full membership of the European Union.

Fourteen years on, Turkey’s economy is gripped in a downward spiral. The lira has lost 20% of its value against the US dollar since the start of this year. It shed a further 2% following today’s central bank announcement, hitting a record low of 9.50 Turkish lira to the greenback. The bank is thought to have caved to pressure from Erdogan, who sacked three members of the monetary policy committee last week because of their reported resistance to lowering interest rates. He’s already sacked three governors for the same reason because, contrary to the widespread consensus to the opposite, he claims high interest rates spur high inflation.

Oya Ozarslan, of the international watchdog Transparency International, said, “As a result of this designation, Turkey could eventually face sanctions from the World Bank, the European Bank for Reconstruction and Development, or face difficulties in securing loans from them.” Private investors will, in turn, likely shy away as well. Turkey ranked 86th among 189 countries on Transparency International’s Corruption Perceptions Index in 2020. “Turkey along with Hungary has been backsliding for the past eight years,” Ozarslan told Al-Monitor.

The grey list is meant to deliver a warning to countries to either shape up or risk ending up on the black list alongside Iran and North Korea. It’s also a first sign that the banking sector of the listed country cannot or does not have sufficient checks in place to stop money laundering or terrorist financing. This in turn means that doing business with financial institutions in grey-listed countries creates exposure to enhanced illicit finance risk.

Under FATF protocols, grey-listed countries “commit to resolve” the issues being flagged. But so far Turkey has done little by way of proving such commitment. In August, the government introduced legislation to crack down on shady beneficial ownership practices whereby the main owner of the assets of any given company, who principally benefits from its income, hides behind another name. Ozarslan noted, however, that the measure is weak and hard to enforce. Even when tougher laws are put in place, “they are rarely implemented,” she added.