Has Turkey given up fighting corruption?

Turkey's new government shies away from even paying lip service to fighting corruption, as allegations of graft and bribery at the higher echelons of the state reach as far as the United States. 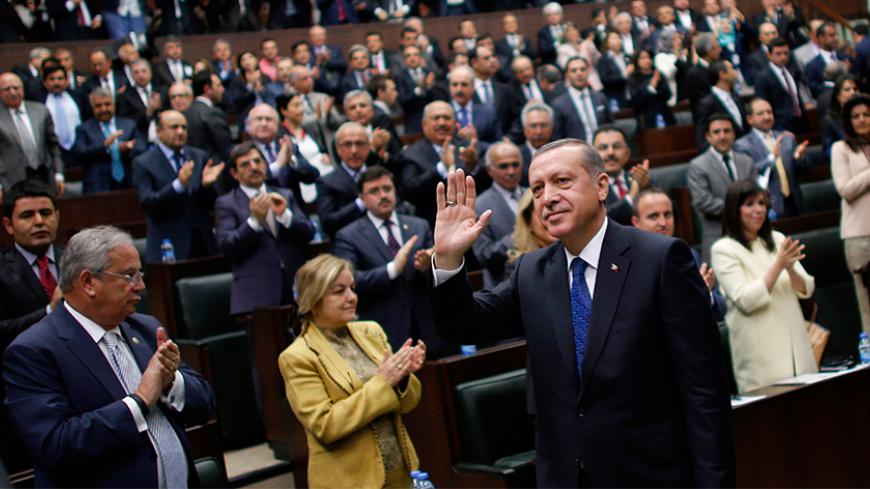 Turkey's Prime Minister Recep Tayyip Erdogan greets members of parliament from his ruling Justice and Development Party as he arrives for a meeting at the Turkish parliament in Ankara, June 3, 2014. - REUTERS/Umit Bektas
Sukru Kucuksahin
June 8, 2016

Following its creation in 2001, Turkey's ruling Justice and Development Party (AKP) singled out corruption, poverty and restrictions on liberties as the three main areas of its political battle. Using the initials of the Turkish words, it even coined a slogan — “Fighting the 3Y” — which became one of its most popular ones. Today, 14 years on, the AKP is wary of even uttering the expression “fighting corruption.” Most recently, an anti-corruption commission, created by the AKP itself, was tossed into the dustbin of history by the new government of Prime Minister Binali Yildirim.

In a bitter irony, the move came against the backdrop of a deepening US probe into the dealings of Reza Zarrab, an Iranian-Turkish businessman accused of violating sanctions on Iran with the help of Turkish politicians and bureaucrats. Zarrab was a central figure in a huge bribery and graft scandal in December 2013, which Ankara quickly covered up through a massive purge in the police and the judiciary.

President Recep Tayyip Erdogan, the AKP’s founder and omnipotent leader, has spoken volumes about stamping out corruption. In the early years of his political career, he would even show his wedding ring as his only valuable possession, i.e., as his proof of integrity. Shortly after coming to power in 2002, the AKP moved to make good on its promises, sending a number of former ministers, including an ex-premier, to the Supreme Court to answer charges of graft. In its party program, the AKP pledged to wage a “most intensive struggle” against corruption and nepotism, make sure that “full transparency and accountability prevail in every area of public life,” pass legislation to prevent “the pollution of politics” and oblige all elected officials to periodically reveal their wealth.

Any discussion on whether today’s Turkey is the one painted above seems luxurious. Let’s simply recall post-election reports by the Organization for Security and Cooperation in Europe, which highlight a lack of transparency in campaign financing and practices overshadowing the fairness of elections. Let’s also consider how Turkey has fared on the Corruption Perceptions Index of Transparency International; ranking 65th in 2002, the country climbed to 53rd place in 2013 before plunging to 66th place in 2015.

During its 14 years in power, the AKP has made dozens of amendments to the Public Procurement Law, the latest of which parliament passed last week. Thanks to those amendments, countless public procurements have become exempt from the control of the Public Procurement Authority, created in 2000 to curb corruption and nepotism in the public sector. Now, public tenders that remain under its control are the exception.

In a further blow on oversight, the reports of the Court of Accounts, the top public auditor that — by law — works on behalf of parliament, are no longer submitted to parliament itself, meaning the legislature’s means of reviewing and checking public spending is now largely limited.

The list of how accountability has been flouted is long, but the attitude of the new government, which took office May 29, says it all. While presenting his government’s program in parliament, Yildirim went down in history as a prime minister who did not mention “fighting corruption” even once, though he did utter the word “transparency” three times. But it did not end there.

In December, the previous government, led by Ahmet Davutoglu, had created an anti-corruption body, chaired by a deputy prime minister and called the Commission on Increasing Transparency and Enhancing the Fight against Corruption. A month later, Davutoglu unveiled a “transparency package” aimed at tackling corruption. Erdogan, however, slammed the package with a memorable objection. Referring to a proposal that required party officials to reveal their wealth, he said, “If it goes on like this, you can’t find anyone to chair even [the party’s] provincial and district branches.” So, the proposed measures went down the drain. Once in office, the Yildirim government quickly issued a circular dismantling Davutoglu’s anti-corruption commission.

In short, Turkey now has an unprecedented government that does not pledge to fight corruption, not even as lip service.

Last week, the Turkish branch of Transparency International offered a grim assessment of Ankara’s anti-corruption record in the past six years. It noted only “limited progress” on only six out of 28 measures outlined in a 2010 action plan, which, it said, was followed by a second one in April without any public discussion. The new plan, the statement said, is basically “a list of what has not been done in the past six years,” and seems to have been penned only because fighting corruption is one of the European Union’s conditions for a visa-free travel regime for Turkey. It remains unclear whether the new government is committed to the plan, it added.

Speaking to Al-Monitor, the head of the group, lawyer Oya Ozarslan, said they kept in close contact with the relevant authorities, but failed to ensure transparency on how the government worked on the 2010 action plan.

“No one had any idea of what was going on. Certain commissions were set up, but there was no coordination between them, and no information was available on what proposals had been made or what steps had been taken or what has been said [at the meetings]. Despite all our nagging, everything transpired in the world of mystery,” she said.

For Ozarslan, “fighting corruption seems to be no longer an area of real effort” for the government. “Corruption has to be punished in line with the law, but as we’ve seen various times, this is no longer the case in Turkey. The charges of December 2013 were the first major example,” she added.

According to Ozarslan, AKP-linked officials enjoy “bureaucratic immunity” against accountability. “For instance, you never hear about investigations or media reports of corruption concerning AKP-held municipalities … while virtually all opposition-held municipalities, which make one-third of the total, have faced such accusations,” she said.

Another big problem is the deteriorating state of judicial independence, Ozarslan said. Indeed, the alarm of tightening government control of the judiciary grew further last month when the heads of three top-level courts accompanied Erdogan on a trip to his home province, which saw them pluck tea together.

“Fighting corruption requires a strong, independent and impartial judiciary in which everyone trusts. Similarly, the media has to be functioning. Today, corruption has become a no-no word in the mainstream media,” Ozarslan said.

The current state of affairs calls for an all-out mobilization against corruption, she stressed, warning of a long-term social erosion. “The money that is being lost is … money from everyone’s pockets. If we want a clean, decent administration, we all need to fight corruption,” Ozarslan said. “Today you can’t offer people neither a good nor a bad example because corruption trials have become impossible in Turkey. This in turn legitimizes the notion that [the corrupt] get away with it anyway.”