Business as usual: Turkey's never-ending love of the bribe

Some 46% of Turkish businessmen believe corruption won’t end, while the country sinks lower in the global transparency index. 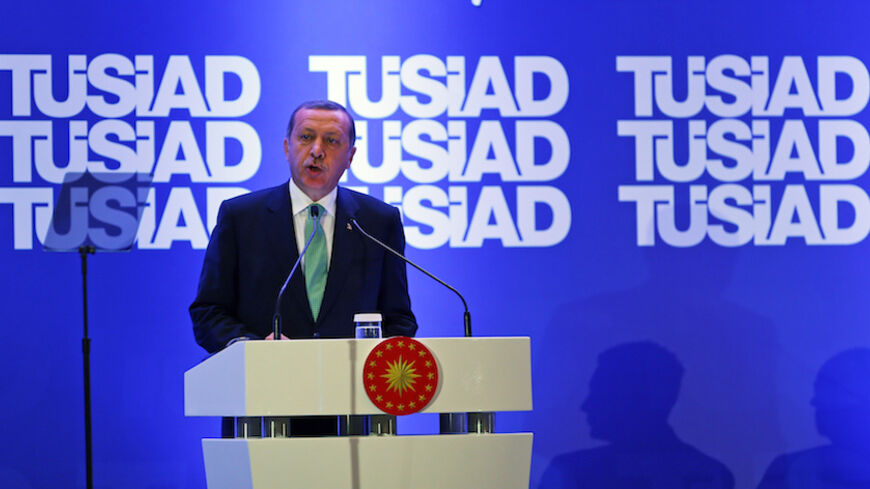 When corruption allegations against municipalities and governments come onto the agenda in Turkey, most of the public shrug them off, saying: “He may be embezzling but he works hard.” This of course is a significant indicator of how the people grant the right of corruption to their rulers.

Since the “this is my tax money” concept and demanding accountability have not yet been adopted fully by society, rulers have the freedom of doing what they want, including in public contract awards.

That the citizen doesn’t react is not new. People remember collapsing banks, imaginary exports and all other kinds of graft and bribery. When that is the case, then in the public's perception there is nothing wrong if those building roads, bridges or sidewalks are corrupt. Turks are very considerate people.

The role of suddenly increasing food and coal assistance packages on the eve of elections cannot be ignored. Those aware of Turkey’s political sociology know well that every handout before elections has a price. People have not forgotten how the Genc Party (Young Party) on Nov. 3, 2002, got 7.25% of the votes by distributing free doner kebab and ayran, the national yogurt drink.

People are more concerned with what which party will give them. Politics are thus based on packages. This has become a dependence that is hard to change. Packages sometimes include rice, flour, sugar and sometimes dollars.

In the Dec. 17-25 corruption investigation, millions of dollars were in shoeboxes. Sons of some ministers and bureaucrats were detained. But only a few months later, on March 30, 2013, local elections were held and the ruling AKP increased its votes by 5% compared with the previous elections, to 44.19%. Its nearest rival, the Republican People’s Party (CHP), also increased its vote totals but remained at 28.66% overall.

That was yet another illustration that allegations of corruption and bribery did not mean much to people. But such allegations have been rapidly eroding Turkey’s image abroad. Transparency International released its 2014 Corruption Perception Index that placed Turkey 11 places lower than last year. Anne Koch, the organization’s director for Europe and central Asia said Turkey’s regression from 53rd place to 74th among 175 countries was because of the Dec. 17 operation. Koch said, “Millions of dollars in shoeboxes, the firing or resignation of ministers, many detentions, led the news on corruption.” She said some countries in Africa and Middle East were better placed than Turkey.

Oya Ozarslan, chairwoman of the Turkey branch of Transparency International, said in Turkey one out of five persons pays bribes to benefit from public services.

A corruption report by the powerful Industry and Business Association (TUSIAD) followed. The report, based on interviews with 801 businesspeople, cited half of the respondents saying there was corruption in Turkey and quoted 46% expecting further increases in corruption.

TUSIAD Chairman Haluk Dincer said their research by and large matched their predictions. “There is corruption in Turkey and the trend is for further increase,” he said. Dincer said corruption added 10% to production costs.

The Turkish National Assembly established an inquiry commission to investigate the Dec. 17-25 corruption and bribery allegations. Iranian businessman Reza Zarrab, who was at the center of the allegations, and some ministers and bureaucrats were asked to testify. Although until now the findings of the parliamentary inquiry commission were given out to the media, this time the assembly speaker asked the public prosecutor to impose a ban on publishing the findings of this investigation. This was agreed to by an Ankara court and a ban was slapped on the proceedings of the commission.

Speaker Cemil Cicek said he wasn’t the one who asked for the reporting ban, but commission Chairman Hakki Koylu. The opposition CHP then petitioned the speaker to remove Koylu from the commission on grounds of violating his neutrality. No action was taken.

At the moment, the investigation is said to be going on, but nothing is being told to the people. Anyway, even if the people were kept informed, nobody would expect an outcome that would have the accused ministers tried in court, because the commission findings must be approved by the assembly quorum. Since AKP has 312 out of 550 parliamentary seats, such an outcome is unlikely.

In short, there were always allegations of corruption in Turkey and we have them today as well. Nobody, including top businessmen, think it will ever end. Nature and the scope of corruption may change, but corruption continues to be an unchanging agenda item of the country.