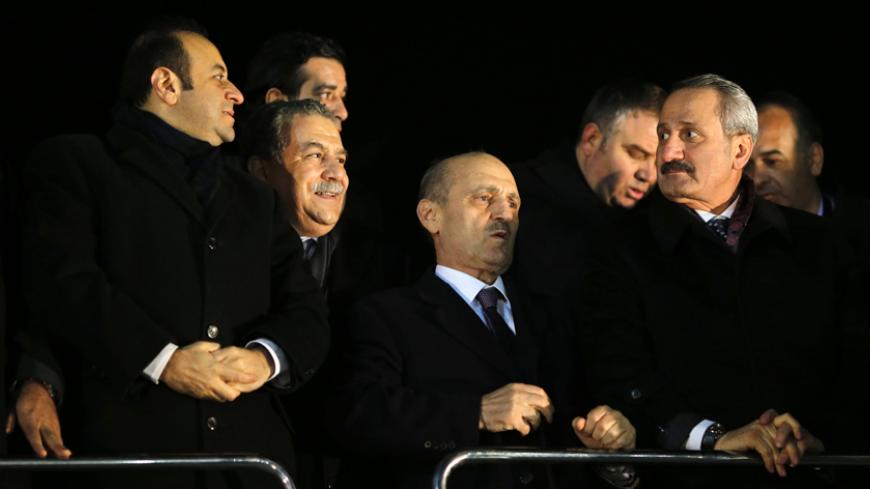 Dec. 17 will mark the first anniversary of the surfacing of a prosecutor’s secret corruption investigation that turned the criminal spotlight on four Cabinet ministers of the ruling Justice and Development Party (AKP) and their close-knit network. This event also marks the public divorce of the AKP and the US-based Sunni cleric Fethullah Gulen and his followers.

Then-Prime Minister Recep Tayyip Erdogan accused the Gulenists of establishing a "parallel state," in particular infiltrating the judiciary and the security establishment in an attempt to bring down the government. Hundreds of prosecutors and thousands of police officers have been reshuffled since then. Having been elected the country’s president in August, Erdogan vowed to eradicate all state institutions of the Gulenists. In October, an Istanbul court decided not to prosecute those involved in the graft probe. Yet, the case of the four former Cabinet ministers — Economy Minister Mehmet Zafer Caglayan, Interior Minister Muammer Guler, Minister of EU Affairs Egemen Bagis and Minister of Environment and Urban Planning Erdogan Bayraktar — is different.

Although these ministers resigned from their duties, they are elected members of parliament who still benefit from the privileged status of immunity. According to Turkish law, those benefiting from immunity can only be judged by the Constitutional Court. For this to happen, however, a parliamentary commission needs to decide first whether there is reasonable doubt to take them to court. In this procedural framework, a parliamentary investigative commission was established to inquire about the alleged wrongdoing of the four Cabinet ministers.

In response to the legal application of the parliamentary commission’s chairman and AKP Kastamonu deputy, Hakki Koylu, an Ankara court decided Nov. 25 to impose a gag order on the media until Dec. 27 in regard to the coverage of the parliamentary commission’s work. The court reasoned its decision pointing to a need “preventing harm to personal rights and protecting the reputation and good names of former ministers.” The commission will finalize its work on Dec. 27.

Yet, the opposition members in the parliamentary investigative commission protested Koylu for applying to the court without consulting with them. Erdal Aksunger, Izmir deputy from the main opposition Republican People’s Party and a member of the commission, said, “Koylu has no right to apply to the court without consulting with the members of this commission and getting their consent. He has clearly committed an offense.” Mesut Dedeoglu, Kahramanmaras deputy of the Nationalist Action Party (MHP) and a member of the commission, agrees. “We had no knowledge of such application to the court. We cannot accept such a media ban. Initially, the AKP did not want to form this commission. This commission was established after so many hurdles, and then they did all they could to delay the flow of information to the members of the commission,” Dedeoglu said. “They are trying to whitewash these bribery and corruption files. We — as the MHP — won’t allow this to happen. We will do all in our power and within the legal means to get to the bottom of these corruption allegations.”

Dedeoglu added, “What do the civilian courts have to do with parliamentary work? These courts have already decided to acquit 53 people whose names were involved in the graft probe. This should not have been permitted in the first place before the parliamentary investigative commission completed its work. We were tight-lipped about the discussions in our commission’s meetings anyway. Why did they need to impose this ban on the media? Because they want to whitewash these corruption charges.”

In an interview with Al-Monitor, Mustafa Guler, an Ankara-based lawyer, also points to new conflicts following the court’s decision on the media ban. “The court’s decision clearly violates the rule of the separation of powers. This is a parliamentary investigative commission. Therefore it is only the parliament’s general assembly that could decide whether to impose a media ban,” Guler told Al-Monitor. “If you expose the parliamentary work to the judgment of civilian courts without following the legal process, this could create new sets of conflicts in the future.”

A number of Turkish media organizations — such as Evrensel, Cumhuriyet and Birgun, as well as online news journals such as T24, soL and Ileri — known to boldly oppose the government, openly declared that they would not abide by the court’s gag order. The papers stated that their first duty is to serve the public interest, and that they cannot do without reporting on these corruption allegations.

The Journalists’ Association of Turkey (TGC) also expressed strong resentment against the court order, stressing that it prevents people’s right to access news. A TGC statement on Nov. 26 said the court’s gag order “has curtailed freedom of the media. The media’s duty is to inform the public on all issues that affect the people. In democratic regimes, the media is free and cannot be censured.” Turkey’s Press Council agreed and said that it was unacceptable for the courts to decide on potential future harm to the reputation of former ministers. The council said the media have legal obligations for not violating the confidentiality of any ongoing investigation, and wrote, “The Turkish Penal Code holds the media responsible for any slander against those under investigation. Those who exceed the limits of the right to news always are held responsible.”

The court's decision was also condemned by the International Press Institute (IPI). “This gag order, which seeks to pull a veil of secrecy over allegations of corruption, a matter of vital public interest, will undermine confidence in the rule of law and cast further shadow over democracy in Turkey,” IPI Senior Press Freedom Adviser Steven Ellis said. “And by preventing the public from learning about the former ministers’ explanations for their alleged actions, it will fuel rumour and breed further cynicism. None of these results serves those accused of wrongdoing or the people of Turkey. We urge those responsible to take immediate steps to end this ban.”

Guler, however, said the court’s decision was not only limited with the ongoing investigation. “With this gag order, the government indeed attempts to prevent the media from reporting any news in regard to these corruption charges,” he said. “It is already against the law to violate the sanctity of any ongoing investigation, but they are not able to take any legal action despite the court order against those who continue reporting about this graft probe. Why? They cannot do that, because the moment they file a case against any of those newspapers continuing to write about this issue, they would have to reveal those in the courtroom they are trying to hide.”