Turkey has begun to evacuate Turkish citizens stranded in Kyiv as Ankara's political opposition slams the government for failing to act sooner. 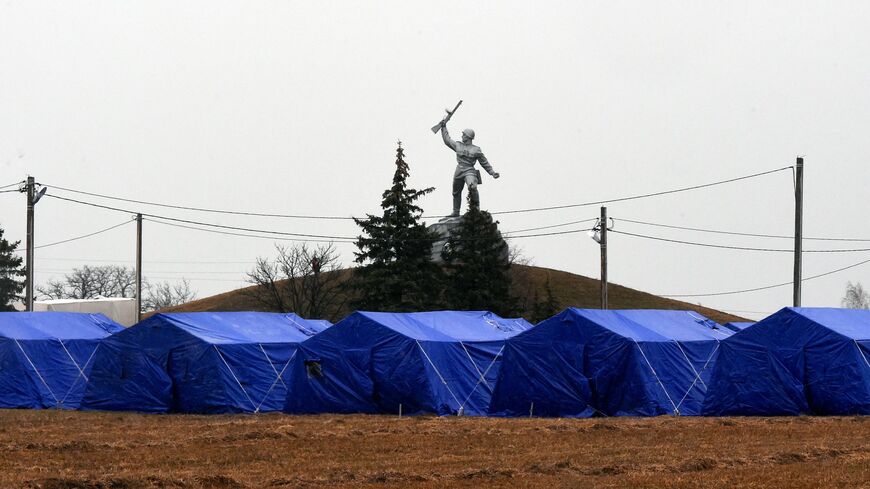 Tents for people evacuated from separatist-controlled regions in eastern Ukraine are seen near the border checkpoint in Avilo-Uspenka on Feb. 24, 2022. - OLGA MALTSEVA/AFP via Getty Images

Turkey has begun to evacuate some 200 Turkish citizens stranded at Turkey’s embassy in Kyiv amid escalating fighting between Russian troops and the Ukrainian army.

The Turkish citizens who were sheltering at the embassy in Kyiv were taken to buses and they are en route to Romania, Turkey’s pro-government A-Haber television reported.

Earlier today, Turkey’s President Recep Tayyip Erdogan said the Turkish diplomats in Ukraine have been taking necessary steps to evacuate the citizens by road through safe routes as the Ukrainian air space is closed.

Most of the Turkish citizens stranded in Ukraine are college students studying in the country. Following the Russian assault, the Turkish Foreign Ministry advised its citizens to shelter in place. The ministry also shared several helplines, urging them to reach out for evacuation arrangements.

“There are still numerous people in here who haven’t been contacted by the consulate. This causes panic and alarm among the people,” a college student in Kyiv told Turkey’s daily Birgun. “We demand an immediate evacuation.”

The Turkish opposition has also slammed the government for failing to warn and evacuate Turkish citizens from Ukraine in a timely manner.

Republican People's Party (CHP) lawmaker Utku Cakirozer said that Turkey’s failure to issue timely warnings for its citizens to ensure their safe evacuation from Ukraine has exposed how the government was caught off guard by the Russian invasion.

“Almost all countries have evacuated their citizens from Ukraine,” Cakirozer told Turkey's Halk TV television. “Turkey was the last country to issue a warning. And that warning was only about urging the citizens to be cautious about traveling to eastern Ukraine,” he added.

Several Western capitals including Washington, London and Oslo advised their citizens to leave Ukraine before the Russian invasion amid escalating tensions between Moscow and NATO. Ankara, meanwhile, issued two warnings on Feb. 12 and 22 urging its citizens to stay away from eastern Ukraine.