Israeli PM pledges Iran will no longer be untouchable

Prime Minister Naftali Bennett says even if there is a nuclear agreement with Iran, "it will not bind us." 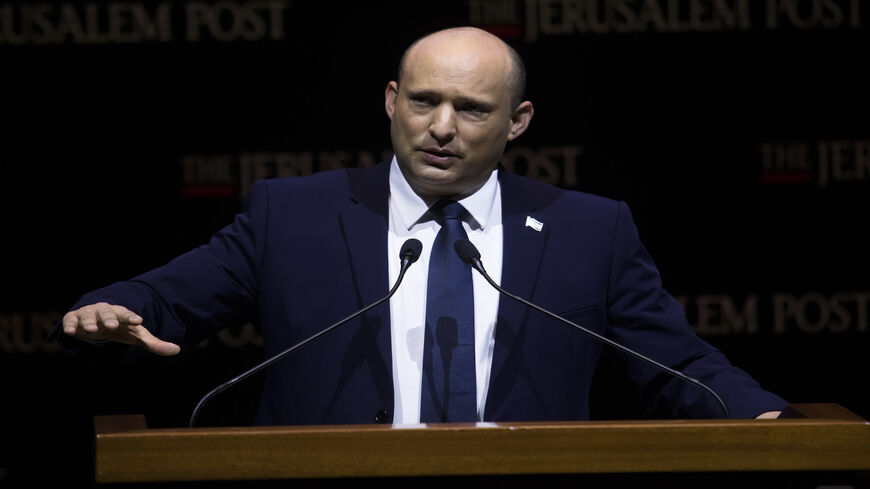 The Israeli military is on an accelerated shopping spree that Prime Minister Naftali Bennett described as a “period of unprecedented buildup.” The new acquisitions include missiles, rockets, ammunition, refueling aircraft, development of laser-based interceptor systems, offensive and defensive cybertools, restocking of supplies, and so on. The additional defense spending allocations follow two years of political tumult that held up approval of a new state budget and rearmament plans. In a series of interviews last week with Al-Monitor and other media, Bennett explained the goal of this buildup.

Judging by these interviews, seven months after assuming office, Bennett is starting to feel comfortable in his new perch despite widespread political criticism and poor polling. His self-confidence has skyrocketed and he is also buoyed by the failure of recent negotiations on a plea bargain in the corruption trial of his predecessor Benjamin Netanyahu. A plea deal banning Netanyahu from political office for at least seven years could have melted the glue holding together the ideologically disparate parties of Bennett’s coalition government. For now, such an agreement is off the table.

In response to a question by Al-Monitor, Bennett elaborated on his economic and security doctrine and on the need for billions in additional defense expenditure. “My goal is to bring about massive economic growth through reforms and incentives and to raise the gross domestic product to $1 trillion within 12 years,” said the former high-tech entrepreneur. “Some of the money will be allocated in real time for a buildup of our strategic advantages that would leave Israel’s enemies far behind. This will prevent war, not bring it closer, and result in stability and growth.”

Bennett was outspoken in his criticism of his predecessors, particularly Netanyahu. “We inherited an unacceptable legacy,” he said. “Two months before I took office, Iran started enriching uranium to the 60% level and no one did a thing about it. Iran is the closest it has ever been to nuclear capability. Zoom out for a minute: You have a long-standing war between two regional powers that is being fought by one side only. They hit out at us, and we do not hit out at them. They have enveloped Israel with octopus tentacles and instead of striking the head of the octopus, we are quarrelling with its arms.”

The prime minister, who fought as an officer in an elite army unit deep inside Lebanon during the 2006 Second Lebanon War, said, “We have been playing into the hands of the Iranians for years. When I fought in Lebanon, I was fighting against Iran’s [Hezbollah] proxies, while the ayatollahs funding and arming them were untouchable. When I took over as prime minister, I reassessed the situation on a clean slate. Iran will no longer be immune. The Iranian regime is rotten, corrupt, unable to supply its citizens with basic needs, the economy is collapsing, entire regions are without running water. So, my new perception is that Israel must enter the arena and work to further weaken the head of the octopus.”

No, Bennett is not declaring war and Israeli jet fighters will not be dive bombing over Tehran in the coming months. He likens Israel’s current situation to that of the United States under the Reagan administration in the late 1970s and 1980s, which exhausted the Soviet Union to the point that it fell apart almost overnight.

“Once we have full laser defences,” Bennett said, “the billions invested in the missile and rocket systems around Israel will be extraneous. The laser will provide a response to this threat. Israel is now on a momentum of laser technology development that will be a game changer. We are making massive investments in this matter and we will win the war through the power of our economy, democracy and innovation. I don’t know where we are on the scale as we head for a decisive victory, but we must continue to work all the time, in the military field, too, and exert pressure on Iran’s proxies in Syria. What business do they have there? What are they looking for on our borders?”

Asked whether the Israel Defense Forces were operating against Iran in locations and with tools that have not been made public, in addition to its activity in Syria as reported by foreign media, Bennett answered, “We’re just getting started, we have many tools.” Iran’s threat, he said, is not only nuclear. “Some 100,000 missiles in Lebanon are a significant threat with huge destruction potential. What is going on in Vienna could also inflict great damage.” Lifting the sanctions from Iran’s failing regime as part of an agreement signed in Vienna would mean an infusion of billions into its state-supported terrorism, he noted. “That is a cause of concern.”

The American-born leader also discussed Israel’s disagreements with the United States. “We must be honest in saying we have disagreements with the United States, our great friend. The way we see it, Iran is playing with a very weak hand and is bluffing. This lie must be exposed, and they must be given a choice — survival of the regime or a continued race to nuclear capabilities, and they must not be given a gift of tens of billions,” Bennett said.

Asked whether he would clash publicly with the US administration as his predecessor Netanyahu did, Bennett answered, “We are in dialogue with the Americans. Two days before Christmas, national security adviser Jake Sullivan flew here on a special flight and the visit was very beneficial. Either way, even if an agreement is signed [with Iran], it will not bind us.”

The prime minister was asked what would happen if world powers sign a nuclear agreement with Iran, leaving Israel completely alone in the campaign. “That will not change our fundamental strategy according to which the United States is our biggest and most important ally and our close friend, but the world is changing,” Bennett said. “We are in an era in which there is no longer one cop — there are other actors. Personally, I have invested a lot of time in restoring relations with the Biden administration and the Democrats, but Israel must seek support elsewhere, too, and forge additional alliances. Israel must become an asset for the world and we have the tools for this — in cyber, high tech, global warming, innovation. You create added value, join up with other forces and multiply your power.”

And meanwhile? Bennett was asked. “As the entire world can see, we are increasing our activity in terms of the 'war between the wars' with Iran. We are more active; we will not let go until Iran pulls out of Syria. They have no business being there. It is a lose-lose situation for them, because if they stay, they will continue to sustain blows, and if they fold up, they would be admitting defeat. And we have no intention of giving up,” he concluded.