The Takeaway: Yemen’s future may be affected by Iran talks

Iran and Israel; Iran and China; Iran and Turkey; Hamas alternative to "Fauda"; and more … all in less than 1,400 words. 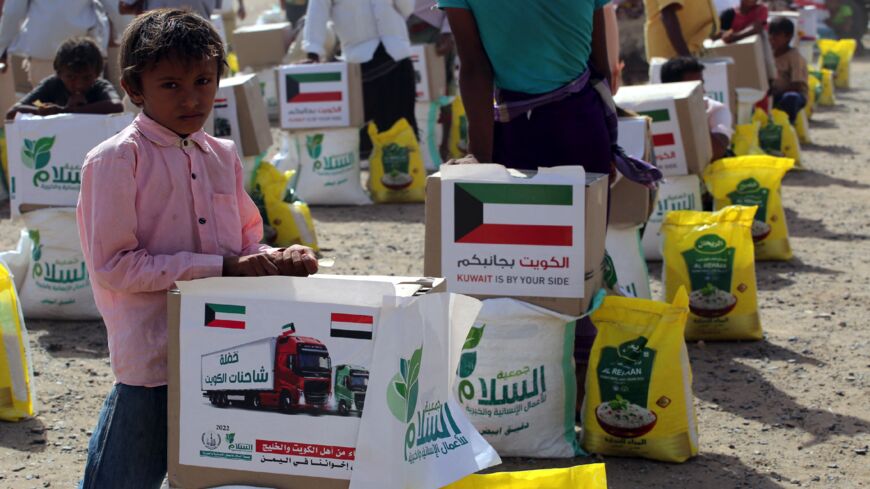 Yemenis displaced by conflict receive food aid and provisions to meet their basic needs at a camp in the Khokha district of Yemen's war-ravaged western province of Hodeida, on Jan. 31, 2022. - KHALED ZIAD/AFP via Getty Images

US ups the ante in Yemen

The Biden administration is shifting its approach to the Yemen war, now entering its seventh year, in response to escalating drone and missile attacks by Ansarallah (Supporters of God, the formal name of the Houthis) on the home territories of the United Arab Emirates and Saudi Arabia.

Just this week, the United States committed more military support to its Gulf partners while weighing whether to return Ansarallah to the list of Foreign Terrorist Organizations or, failing that, sanctioning key Houthi leaders.

The bottom line is that the United States is getting more, not less, involved in Yemen, as crucial nuclear talks with the Houthis’ backer, Iran, enter their final weeks. Consider this timeline:

2021: A ‘particular focus’ on Houthi sanctions

So far in 2022, again according to the UN, there have been 1,403 coalition airstrikes on Yemen and an additional 39 attacks by the Houthis directly on Saudi Arabia and the UAE.

Our take: Watch the Iran talks

In what Prime Minister Naftali Bennett has touted as a “period of unprecedented buildup,” the Israeli military has embarked on a massive spending spree that includes acquisitions of missiles, rockets, ammunition, refueling aircraft, development of laser-based interceptor systems and new cyber tools. Bennett told Al-Monitor that the billions in additional defense expenditure will “prevent war, not bring it closer,” and he hopes to raise Israel’s GDP to $1 trillion within 12 years.

Bennett also discussed Benjamin Netanyahu’s “unacceptable legacy” on Iran, Israel’s disagreements with its “great friend” the United States and his view of the Vienna talks. “[Iran] must be given a choice — survival of the regime or a continued race to nuclear capabilities, and they must not be given a gift of tens of billions,” he said. Read more of Ben Caspit’s recent interview with Bennett here.

In other Iran news, a disruption of Iranian gas supplies to Turkey this month triggered an unprecedented energy crunch that put Ankara’s energy preparedness under new scrutiny. The gas cut on Jan. 20, which was blamed on a technical hitch in the pipeline between neighbors, forced Turkey’s state pipeline operator to slash gas supplies to industrial zones and resulted in a supply drop of about 20 million cubic meters per day.

“The energy crunch hit production at hundreds of enterprises at a time when Turkey’s industry is already grappling with economic turmoil and skyrocketing gas and electricity prices, raising questions over Ankara’s energy ties with Tehran and its energy policies,” writes Muhdan Saglam. Energy pundits say the Turkish government was slow to respond to the stoppage, having failed to prepare for harsh winter weather and tough market conditions.

Meanwhile, Iran has approved China’s opening of a new consulate in the port city of Bandar Abbas, in what Sabena Siddiqui calls “a significant development” for Sino-Iranian ties. The consulate — China’s first in Iran — is likely linked to the 25-year strategic pact the two countries signed in March 2021, which brought Tehran into Beijing’s Belt and Road Initiative.

China remains Iran’s top trading partner. But whether the pair can deepen economic ties with the Islamic Republic hinges on the outcome of the Vienna talks, including whether the United States will lift its secondary sanctions on Iran.

As the long-running dispute between Ethiopia and Egypt continues over the Grand Ethiopian Renaissance Dam (GERD), the Egyptian government is shoring up relations with other African countries. Most recently, Egypt inaugurated a solar power plant in eastern Uganda, which Ibrahim Ayyad reports is the latest example of an Egyptian development project on the African continent. The power plant’s opening comes amid recent reports that Addis Ababa has begun testing power generation at the GERD at a time when Cairo called for resuming negotiations on a binding agreement.

A new Hamas-backed action series is coming to television screens across the Arab world this spring. The 30-episode show called “Qabdat al-Ahrar” ("Fist of the Free") portrays the infiltration of an Israeli cell sent to the Gaza Strip to abduct a prominent Palestinian resistance leader.

The series was filmed on location in the Gaza Strip with local actors. Ahmad Melhem writes that Hamas is framing the show as the alternative to “Fauda,” a popular Israeli series about an Israeli counterterrorism unit operating in the West Bank.

Listen: Back from her reporting trip to Ukraine, Amberin Zaman and analyst lliya Kusa discuss why Ukrainians are so fond of Turkey and its authoritarian leader, President Recep Tayyip Erdogan. Link here.