Tension has returned to the flashpoint East Jerusalem neighborhood of Sheikh Jarrah, which portends a renewed military confrontation between Palestinian factions and Israel. 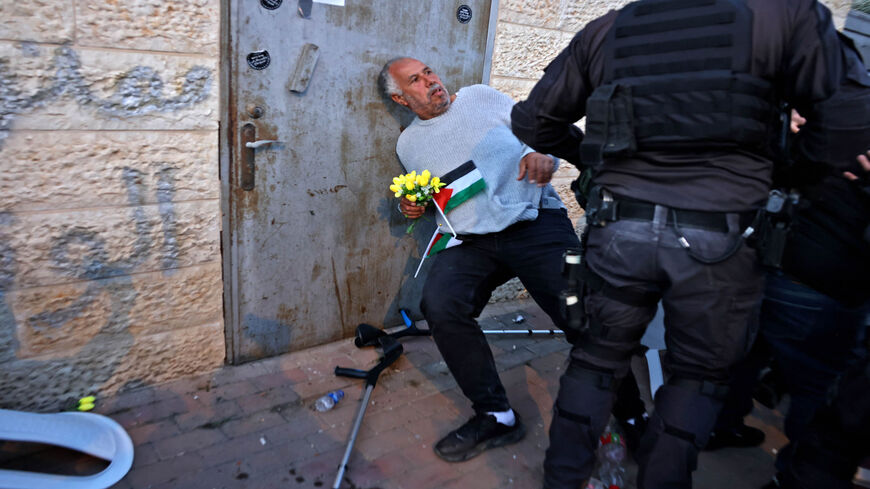 RAMALLAH, West Bank — Tensions that had sparked an 11-day conflict with Israel in the Gaza Strip in May 2021 recently returned to the Sheikh Jarrah neighborhood in East Jerusalem.

The tensions escalated after far-right Knesset member Itamar Ben-Gvir set up a makeshift office in the neighborhood Feb. 13, in tandem with a notice of eviction against a Palestinian family living there.

Palestinians in Sheikh Jarrah continue to be threatened by forced displacement and house demolition. On Jan. 31, the Salem family received a notification to vacate their home located in the western part of the neighborhood under the pretext that the property is owned by Israeli settlers. The family has until April 1 to leave their home, otherwise their house will be demolished.

On Jan. 19, the house of Mahmoud Salhiya, another resident of the neighborhood, was leveled to the ground by Israeli forces under the same pretext.

Ibrahim Salem, owner of the house threatened with eviction, assured Al-Monitor that his family cannot leave the house they have lived in for 74 years. “The eviction notice is based on the submission of false papers by settler Yonatan Yosef, grandson of extremist Rabbi Ovadia Yosef, claiming ownership of the land and the house we live in. We will file an appeal to the Israeli court to cancel the decision, and we will not remain silent about our right to our land and our home,” he said.

He noted, “We are 15 people living in this ​​240-square-meter [2,583 square feet] house. We also have an adjacent ​​150-square-meter [1,614 square feet] garden that the settlers want to take over as well, but we cannot allow them to do so. When settler Ben-Gvir set up a makeshift office for him in the neighborhood and encouraged settlers to attack us, tensions flared up and the neighborhood turned into permanent military barracks. Police forces are heavily deployed on a daily basis. They set up roadblocks and prevent residents from other neighborhoods from coming in [to Sheikh Jarrah] to show solidarity with us.”

Israeli security and political officials fear that the tensions in Sheikh Jarrah could spiral into a military battle with the Gaza Strip and confrontations inside the Green Line, similar to what happened in May. Resistance factions in Gaza threatened to intervene if the attacks and displacement plans against the residents continue.

Maariv newspaper quoted Feb. 15 an Israeli political source as saying that Prime Minister Naftali Bennett fears recent mounting tensions in Sheikh Jarrah neighborhood could lead to a fresh round of violence in the Gaza Strip. The source noted that Bennett wants to prevent this.

The source added, “This is a political provocation.”

In a Feb. 15 interview with Israel KAN Radio, Israeli Foreign Minister Yair Lapid lashed out at Ben-Gvir for stirring the latest violence in Sheikh Jarrah neighborhood. “Ben-Gvir is not there [in the neighborhood) to protect the Jews, he is there to ignite fire and violence,” he said, describing him as a “sad and shameless provocator” whose goal is to escalate the situation for personal political goals and to draw attention to himself.

On the other hand, Hamas reportedly held discussions with the Egyptian side about the situation in Sheikh Jarrah, warning the clashes in the neighborhood are a “dangerous escalation that cannot be tolerated,” and accusing the Israeli government of “playing with fire again.” Hamas stressed that displacing Palestinians from the Sheikh Jarrah neighborhood is a “red line that the resistance knows how to respond to.”

The case of Sheikh Jarrah received international attention in May 2021, prompting the European Union and the United States to intervene and pressure Israel to prevent the displacement of Palestinian families from the neighborhood. Israel was at the time, and still is, facing pressure amid the fragile security and field conditions in the West Bank and Gaza Strip, and within the Green Line.

What further mounts concern about the events in Sheikh Jarrah is that they are taking place ahead of the month of Ramadan, during which clashes between the Palestinians and the Israeli police usually intensify. In light of this situation, the US administration has pressed Israel to de-escalate the situation in Sheikh Jarrah, according to a Feb. 16 report by the US news website Axios.

Saleh Diab, activist from the Sheikh Jarrah neighborhood, told Al-Monitor that the Israeli authorities and settlers have been espousing a new approach toward Sheikh Jarrah ever since Nov. 2, 2021, when the Palestinian residents unanimously refused a settlement offered by the Israeli court.

The Israeli Supreme Court had proposed a deal whereby Palestinian families would remain in their homes for 15 years as tenants, which means accepting settler ownership of their land.

Diab pointed out that the settlers have since been using forged documents and papers claiming their ownership of the homes. “Settlers have also been attacking the residents and their homes and vehicles,” he said. “During their meeting with European and US delegations, the residents confirmed that they would not allow Israel to evacuate them from Sheikh Jarrah. Attacks continue to this date.”

Diab argued that Israel wants to gain time and is carrying out its demolition and displacement operations gradually. “The residents are very anxious because they know the Israeli mentality and its plans for the neighborhood,” he said.

Since May, Sheikh Jarrah has turned into a flashpoint that could set off a military confrontation between the Palestinians and the Israeli army at any moment. The Palestinian factions have pledged not to abandon the neighborhood and to defend its residents no matter what happens. Accordingly, they remain on standby and on guard while Israel still insists on its plans to displace the residents.