Egyptian women can apply to join the State Council, a top judicial body, after 76 years of the council being limited to men. 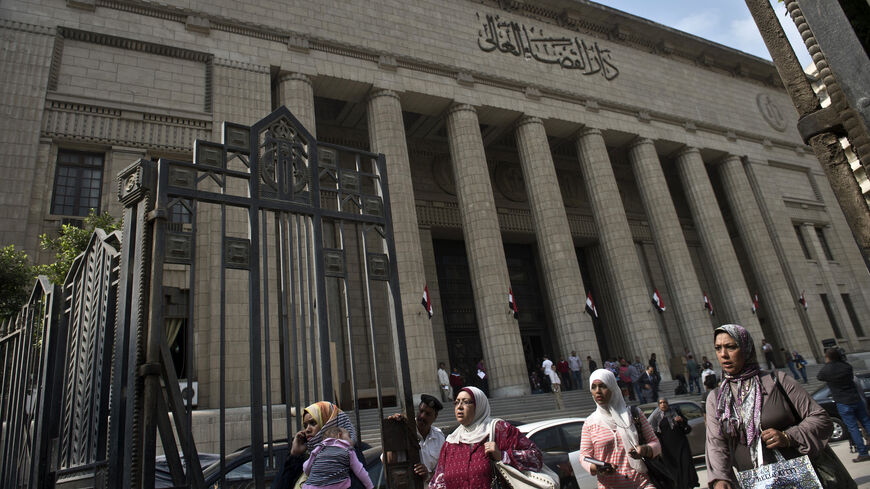 Women leave Egypt's high court during the second trial hearing of the Muslim Brotherhood chief and aids on Oct. 29, 2013, in Cairo. - KHALED DESOUKI/AFP via Getty Images

CAIRO — The Egyptian State Council, one of the pillars of the judiciary, announced Jan. 27 that for the first time in its history, it was opening applications for the assistant delegate position of both men and women who completed degrees in law and Sharia in Egyptian universities in the year 2021.

In the 76 years since the council's establishment in 1946, the assistant delegate position remained limited to men.

The State Council announced back in March 2021 that it would allow women to join the council on the condition that they already held positions in the Administrative Prosecution Authority or the State Lawsuits Authority before requesting admittance to the council. The decision faced criticism at the time as overly restrictive.

The council, which includes about 3,000 judges, settles administrative disputes and review bills and other legislative actions.

The body's head Mohamed Hossam el-Din said in a Jan. 27 press statement that opening the door to female applicants is the implementation of a ruling by the Supreme Council for Judicial Bodies and Authorities headed by President Abdel Fattah al-Sisi. He noted that all applicants will be equally evaluated.

Al-Monitor contacted Umniah Gadallah, who works as an assistant professor at the Faculty of Sharia and Law at Al-Azhar University in Cairo. She has filed several lawsuits since 2014 demanding the right to be considered as a judge in the State Council. Two of the lawsuits were dismissed but two are still being examined by the Supreme Administrative Court. Gadallah started a social media campaign to promote her cause that now supports law school graduates fighting for the right to apply for a range of judicial positions, according to the campaign’s Facebook page.

Gadallah praised the State Council's latest decision but noted that its swift implementation will be the test of whether it will create balance or remain a formality to gain the public's support.

She pointed out that both female and male applicants are now eligible for the position of deputy attorney general in the Egyptian Public Prosecution, the lowest position in the judiciary. This position was also mostly limited to men with the exception of 11 female prosecutors who were transferred from the Administrative Prosecution Office and the State Lawsuits Authority, she said.

Gadallah added that the State Council’s decision owes to political will and presidential directives to empower women and implement the provisions of the constitution.

Maya Morsi, head of the National Council for Women, said in a Jan. 30 press statement that the State Council’s announcement is the first step toward achieving one of the most important dreams Egyptian women have been struggling to achieve for 72 years, which is equal access to judicial authorities and bodies. She explained that this dream would not have been realized without strong support and backing from politicians who believe in empowering women.

The head of the Women’s Center for Guidance and Legal Awareness, Reda al-Danbouki, told Al-Monitor, "Implementation on the ground is key, as the State Council has avoided appointing women since the 1950s despite the lawsuits that were filed throughout this period and despite Article 53 of the 2014 Constitution, which stipulates equality between men and women. To justify its decision, the State Council alleged that there are special tasks that women will not be able to perform in council positions.”

Danbouki added that the decision to allow female graduates to apply came after pressure from the president.

She continued, “Although a gap still exists between the number of judges in the Egyptian judiciary — with the number of male judges standing at 16,000, and the number of female judges at 92 — we commend the decision and hope that it will be effectively implemented and that the appointment of women is based on a real conviction of their right to assume such positions.”