The Egyptian State Council decided to defy the law on the appointment of the heads of judicial bodies and nominated only Judge Yahya Dakroury, in a move that may stir a dispute with the president. 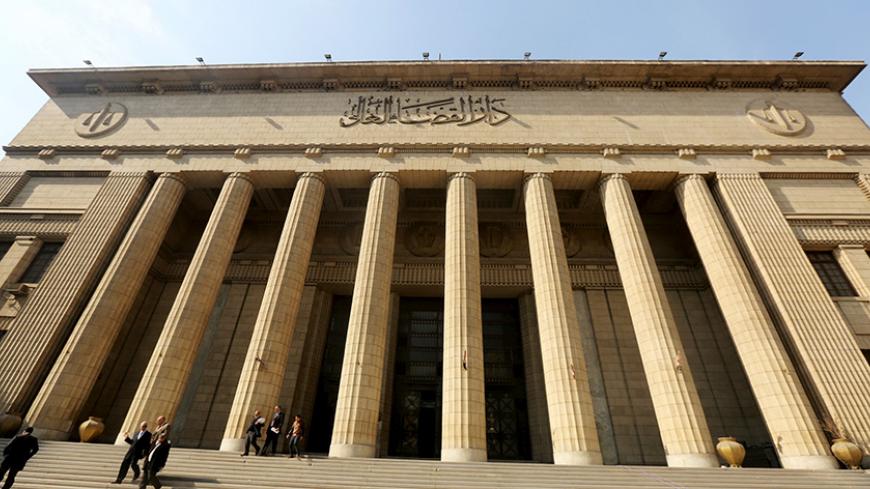 CAIRO — Egypt’s State Council General Assembly surprised Egyptian judicial and political circles May 13 by putting forward their most senior judge, Yahya Dakroury, as the single nominee to head the council.

The terms of the heads of the State Lawsuits Authority, the Administrative Prosecution and the Supreme Judicial Council expire June 30. Also, the current head of the State Council will reach retirement age and his post will become vacant July 19.

According to the law on the appointment of the heads of judicial bodies ratified by Egyptian President Abdel Fattah al-Sisi on April 27, each body shall send the names of three candidates to the president 60 days before the vacancy of the posts.

The State Council’s nomination of Dakroury as its single candidate was in clear defiance of this law and stirred speculation about an ensuing dispute between the president and the State Council.

Observers believe the decision of the State Council’s judges carried two messages to Sisi: They reject his jurisdiction to choose their chief and insist on their independence, and they want to embarrass the president before political and judicial circles.

Indeed, the State Council seems to have put Sisi in a predicament; if he appoints Dakroury, the State Council would appear victorious and if he chooses another judge, Sisi would be seen as disrespecting the judges' desire for independence.

The General Assembly, which represents all members of the State Council, insisted on not applying the new law and rather applied the principle of absolute seniority, in force prior to the passage of the recent law, and accordingly sent their letter to Sisi on May 15, nominating Dakroury only.

In response to the State Council position, Sisi said during a meeting with the editors-in-chief of state-owned newspapers May 17 that the judiciary is a respected institution dedicated to preserving Egypt’s interests, noting that the State Council has made its choice and that he will make his decision in accordance with the law and in line with national interests.

This law in question stipulates that the heads of judicial bodies shall be chosen by the Egyptian president based on the nomination by these organizations of three senior judges.

Salah Fawzi, a professor of constitutional law at Mansoura University, told Al-Monitor over the phone, “The nomination by the State Council of Judge Yahya Dakroury is illegal and should not be taken into consideration. It is not binding on the president at all.”

Fawzi said that the principle of seniority applied by the judiciary is a custom adopted by former presidents. “This has not been specified in the constitution or the law,” he said, noting that Article 83 of Law No. 47 of 1972 governing the State Council confers to the president of the republic the power to appoint the head of the State Council after receiving the General Assembly’s opinion.

In statements to Mada Masr news website May 14, Mahmoud Ahmad, the deputy head of the State Council, said the next step will be determined by the president's decision and would reveal the real purpose behind the promulgation of Law No. 13 of 2017.

He said that if Sisi does not choose Dakroury  as head of the State Council and Judge Anas Amara as head of the Supreme Judicial Council, this will confirm that the law aims to keep these two judges out of top judicial decisions because of their rulings. Dakroury went against the president by issuing a ruling against the Tiran and Sanafir agreement; Amara is affiliated with the independence of the judiciary movement and issued a ruling nullifying all death penalties that are based only on evidence provided by national security investigations.

Amara was among three candidates nominated by the Supreme Judicial Council.

Mustafa Shaat, a legal researcher at the American University in Cairo’s Law and Society Unit, told Al-Monitor the General Assembly’s decision, albeit surprising, is another step that falls within the scope of the State Council’s strong and clear rejection of the law during its discussion and before its ratification.

When the law was first proposed, judges objected to it, seeing it as an infringement on the principle of the independence of the judiciary and the separation of powers, but the Court of Cassation, the Administrative Prosecution and the State Lawsuits Authority complied with it and accordingly submitted to the president their candidates.

Shaat said, “Three judicial bodies yielded and accepted the new law by nominating their candidates, while the State Council rejected it and dug in its heels. This incident was not an embarrassment to or any kind of pressure on the regime but had an impact on the judicial bodies themselves, leading to an unprecedented disagreement within the judiciary.”

He said, “The law so far has served the regime’s goals to undermine the stability of the judicial bodies, reshaping and belittling the political role of the judiciary that had played a prominent role following the June 30, 2013, protests."

Shaat added, “For the first time, the judicial bodies are not aware who their future heads will be as it is no longer up to them to choose their chief but to the president of the republic.”

After the law was passed April 27, independent lawyer Issam al-Islambouli began legal action to invalidate the law on the grounds of unconstitutionality, arguing it breaches Article 25 of the constitution, not to mention that it undermines the independence of the judiciary. In the first hearing, the court set the case for adjudication for June 13.

Islambouli told Al-Monitor that the law is void and null as Egypt’s parliament abused its legislative power when it passed it without taking the opinion of judges on the new amendments in accordance with Article 185 of the constitution, which specifies that the opinion of the judicial bodies is to be consulted on draft laws governing their affairs.

He said that the State Council abided by the constitution by nominating a single candidate, and that all judicial bodies should have done so.

“The State Council has put things in perspective and took a decision that is in line with the constitution. This is a courageous and great stance by the men of the State Council,” he added.

In turn, Hassan Nafea, a professor of political science at Cairo University, told Al-Monitor, “The judiciary branch should not be involved in politics at all. It should act as an independent authority, away from the legislative and executive branches. This is the established principle in any political system with minimal democracy.”

“Only totalitarian or dictatorial regimes subdue the judicial branch and the legislative branch under the jurisdiction of the executive branch, which is what is happening now in Egypt. Today in Egypt, the three branches are being controlled by the president,” he said.

Nafea said, “The new law allows the president to have the upper hand in choosing judges who follow his orders. This is the worst law issued in the history of the judiciary by far. None of the previous presidents, including Gamal Abdel Nasser, who was known for the ‘Judges’ Massacre,’ dared to amend the principle of seniority in the judicial bodies’ law.” The so-called Judges Massacre refers to Nasser's dismissal of over 200 judges in the late 1960s, after the Judges’ Club — the de facto representative of the country’s judges — stepped up its criticism of Nasser's government.

He continued, “What the State Council has done is not a challenge to the president, but it is an expression of its rejection of the law, which undermines the constitution and the independence of the judiciary. It is not a political conflict but rather a conflict over respect for the judiciary as an authority independent from the executive branch. If Sisi sees the State Council’s decision to nominate Dakroury as a personal challenge to his authority and chooses a different candidate, this will send a very negative message to the Egyptian people and the judicial bodies. A political conflict will break out between the judiciary and the president, in his capacity as representative of the political authority. The political authority will be the biggest loser in this case.”

Sisi is expected to announce the names of the heads of the three judicial bodies — the State Lawsuits Authority, the Administrative Prosecution and the Supreme Judicial Council — before June 30, while the name of the new head of the State Council must be announced before July 19.