Egyptian President Abdel Fattah al-Sisi approved legal amendments that allow him to appoint the heads of the judicial bodies in the country, which forecasts a never-ending clash between the state and judges. 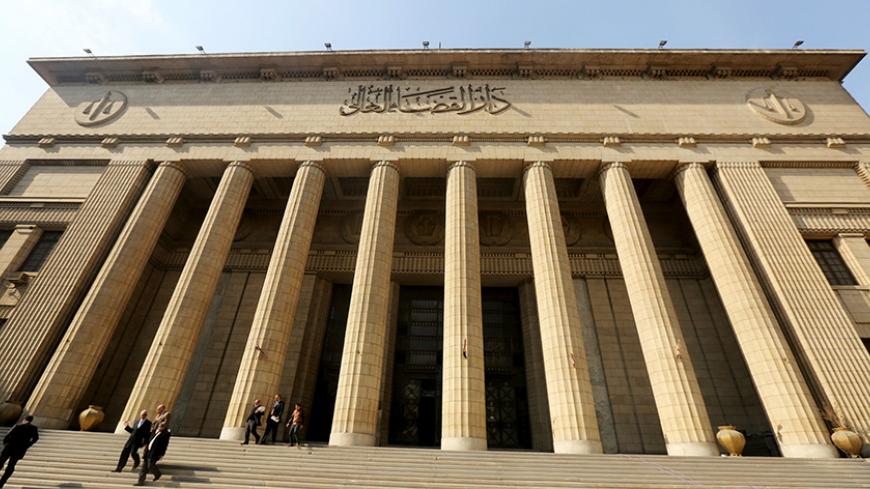 CAIRO — Egyptian President Abdel Fattah al-Sisi ratified on April 27 the legal amendments approved by the Egyptian parliament, allowing him to select the heads of four judicial bodies from among the various candidates for the first time in the history of the judiciary. Before the ratification, the general assembly of each body would submit the candidate for its presidency itself. This raised questions about the future of the Egyptian judiciary, namely whether or not the judiciary will consequently lose its independence.

The amendments were aimed at “the heads of the Egyptian State Council, the Court of Cassation [highest criminal court in the country], the Administrative Prosecution [Authority] and the State Lawsuits Authority,” and came in a new law issued by Sisi a day after the approval by the Egyptian parliament. However, the judges opposed the law, saying it undermines the judiciary’s independence and the separation of authorities, thus sparking a debate between the members of parliament.

In a statement published by Al Shorouk newspaper April 27, former Supreme Constitutional Court President Maher el-Beheiri described the law as “a blatant assault on the independence of the judiciary, interference in its affairs and a violation of its traditions and customs.”

Beheiri said that the new law is not in line with the goals of the revolutions of Jan. 25, 2011, and June 30, 2013, and represents a fallback from the gains achieved constitutionally and legally — namely establishing the independence of the judiciary.

Ahmed Helmy el-Sherif, the deputy of the parliamentary Committee for Legislative and Constitutional Affairs, proposed the law Dec. 23, and added amendments March 27 that increased Sisi's powers of choice. The parliament surprised the judges by approving the law without taking their opinion on the new amendments into consideration, contrary to Article 185 of the constitution.

The article states, "All judicial bodies administer their own affairs. Each has an independent budget, whose items are all discussed by the House of Representatives. After approving each budget, it is incorporated in the state budget as a single figure, and their opinion is consulted on the draft laws governing their affairs.”

Independent Attorney Shawqi al-Sayed told Al-Monitor that the amendments show the executive authority wants to be in control, which paved the way for a clash between the legislative and judicial authorities, thus undermining the principle of judicial independence. He said that passing the law points to the regime’s lack of wisdom and political acumen, especially since the judiciary unanimously opposed the amendments for objective reasons related to constitutional legitimacy, not for personal ones.

Sayed added, "Being hasty and rushing into approving the law by the parliament and the president has raised doubts about whether the real reason for issuing the law was to prevent certain figures from heading some judicial bodies, such as Judge Yahya Dakroury, who ruled that the islands of Tiran and Sanafir remain under Egyptian sovereignty, and Judge Anas Amara Mahsoub of the Independence of the Judiciary movement.”

Mustafa Shaat, a legal researcher at the American University in Cairo’s Law and Society Unit, told Al-Monitor that the new amendments are a serious and unprecedented blow against the judicial norms that are based on the principle of “absolute seniority” when it comes to judicial appointments. Seniority was considered a fair criterion as it does not take into account the candidates’ political and social backgrounds, allowing for the stability of these judicial bodies.

He noted that the amendments granted the president the authority to select the heads of judicial bodies, who might base his choice on the investigations conducted by the security services, thus creating a state of rivalry in the competition for judicial posts.

Shaat added, “The passing of the law was accompanied by a broader dispute concerning the political role of a number of judicial bodies in Egypt after June 30, 2013. The judicial bodies took advantage of the [political] parties’ weaknesses and the restrictions imposed by the current regime on political work over the last four years, to impose themselves [judicial bodies] as a party in the ruling political equation by supporting the regime.”

He explained, “By doing so, the judicial bodies sought to protect their institutional and political privileges by intervening in appointing ministers of justice and reserving this position to judges only. They also sought to preserve the budget of the Justice Ministry, in addition to ensuring the institutional representation of the judiciary within a number of ministries, as consultants."

He pointed out that the current regime was not entirely pleased with the judicial institutions' response to some issues that had political dimensions, such as the Tiran and Sanafir issue, canceling the decisions to freeze the financial assets of individuals and entities accused of being affiliated with the Muslim Brotherhood, or the Court of Cassation's accepting the appeals against a number of well-known prison sentences or the execution of a number of individuals accused of terrorism. According to Shaat, the regime believed that it was bound to put an end to political debate in courtrooms.

Despite the strong objections to the law, the judicial authorities and courts have succumbed to the new amendments and submitted the names of their candidates according to the law; each judicial body submitted the names of three senior judges, from whom the president will choose one. In the past, each body would submit the name of the most senior judge for the president to appoint directly.

Shaat said that passing the law resulted in confusion among the judicial bodies and since the heads of judicial bodies will soon be chosen (no date set yet), they succumbed to this fait accompli. “The judges are significantly isolated in their current confrontation with the regime and the people have recently started seeing judges under a different light, and therefore judges will not be able to confront the authorities,” he noted.

The president of the Judges’ Club of Egypt, Mohamed Abdelmohsen, addressed all judges April 29, saying, “This crisis [the law] and the possible other amendments to the law of the judiciary are evidence that the great Egyptian judiciary is undoubtedly targeted by many institutions in the state, and it has become imperative for us to unify our ranks, overcome our differences, set goals and unite our efforts in order for the willpower of Egypt’s judges to dominate and rightfully achieve victory.”

Shaat said, “I believe this law is the beginning of future concessions that judges will have to make in favor of the authorities, such as reducing the age of retirement or extending the powers of the justice minister.”

For his part, journalist Abdullah al-Sanawi said that the law's passing signals dire conditions that affect the independence of the judiciary, pointing out that the law was hastily passed without taking the opinion of the Legislative Affairs of the State Council, which shows contempt for the constitution and legal rules.