Egyptian-Palestinian activist Ramy Shaath, an advocate for the Israel BDS movement, was released after Shaath agreed to renounce his Egyptian citizenship. 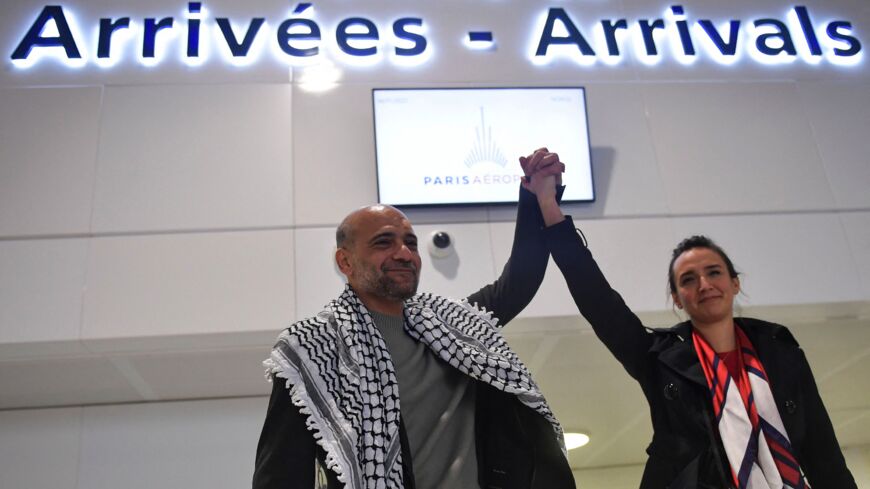 Egyptian-Palestinian political activist Ramy Shaath holds up the arm of his wife, Celine Lebrun-Shaath, as he arrives at Roissy Airport in Roissy, outside Paris, on Jan. 8, 2022, after being detained in Egypt for more than two years. - JULIEN DE ROSA/AFP via Getty Images

After 900 days in an Egyptian jail waiting for a proper trial, Egyptian-Palestinian activist Ramy Nabil Shaath was released by Egyptian authorities on Jan. 8. Shaath was imprisoned in July 2019 along with other Egyptian activists. He is believed to have been jailed because of his activity as the Egyptian coordinator of the Boycott and Divestment Movement for Palestine (BDS). It was seen as a gesture done by the Egyptians to then-Israeli Prime Minister Benjamin Netanyahu and former US President Donald Trump. Shaath stayed in jail almost a year after both were no longer on the political map.

But Israeli Ambassador to Paris Aliza Bin Noun left little doubt that Israel was supportive of Shaath’s imprisonment because of his role with BDS. Bin Noun tweeted that the welcome by French authorities to Shaath contradicted French law against hatred to Jews and Israel and that Shaath’s support for BDS constitutes just that. “Boycott and incitement to hatred of Israel and Jews are prohibited by French law,” stated the tweet shortly after Shaath’s arrival in Paris.

French President Emmanuel Macron had publicly called for Shaath’s release during a press conference with Egypt’s President Abdel Fattah al-Sisi. Macron welcomed Shaath’s repatriation with his French wife, Cecile Le Brun. “I welcome the decision of the Egyptian authorities to release Ramy Shaath. I share the relief of his wife, Celine Le Brun, whom he finds in France, with whom we have not given up. Thank you to everyone who played a positive role in this happy outcome,” Macron said in a tweet in French.

The calls for the release of Shaath had received international support. More than 100,000 people signed an Amnesty International petition, and demonstrations in major world capitals called for his release. The official Palestinian news agency Wafa said in a short statement that the “Palestinian presidency thanks and expresses gratitude to the Egyptian president, Abdel Fattah al-Sisi, and to the Arab Egyptian Republic for the response to the call by the President of Palestine Mahmoud Abbas to release the son of Nabil Shaath.”

A family statement celebrated his freedom and thanked “all the volunteers, the human rights organizations, public figures and thousands of citizens from the Arab region, diaspora and the world who advocated for his release. We are also grateful to the hundreds of lawmakers and government officials who publicly and privately championed Shaath’s case, particularly those who have done so steadfastly and against all odds in France, Europe and the United States.”

Ahmad Samih, an Egyptian activist living abroad, told Al-Monitor that Shaath represented the struggle of Palestinians and Egyptians. “In the same way that Ramy Shaath struggled against the Israeli occupation, his release from Egyptian jail paints a much larger picture of the struggle of both Egyptians and Palestinians who are victims of different types of occupation.”

Nisreen Haj Ahmad, director of Ahel, a Jordanian-based organization that trains leaders on organizing collective action, told Arab News that the concerted campaign by his wife and family attracted support from around the world. “It built power and used creative tactics. Resilience is the secret of this success.” Haj Ahmad, who is a friend of Shaath and Le Brun, said she hopes all political prisoners in Arab countries can gain their freedom. “The freedom of Ramy Shaath is evidence of the people's power and the importance of organizing despite difficult contexts.”

The BDS movement reflected this common struggle of Palestinians and Egyptians in their congratulatory statement for his release. “Our common struggle against Israeli settler colonialism and apartheid intersects with the struggles in the Arab region against despotic Arab regimes that act as tools of imperialism." The BDS statement also called on Egypt to remove Shaath’s name from any so-called terrorist lists. “We call on all international human rights institutions and relevant United Nations committees to intensify pressure on the Egyptian authorities to remove Shaath’s name, and anyone who has been arbitrarily added, from the so-called 'Terrorism List' and to release all political prisoners unconditionally."

Shaath’s release was possible only after his lawyers submitted documents on Jan. 1 confirming his approval to denounce his Egyptian citizenship. He had been charged, without any evidence, of supporting terrorism. Had he been convicted, he would have had all his properties confiscated by the Egyptian state. Egyptian law allows two years of pretrial detention. The condition of renouncing his citizenship was made after he was vindicated of all the charges against him by an Egyptian court.

Independent Egyptian website Mada Masr said that the controversial practice of forcing dual national citizens to denounce their Egyptian citizenship is based on a decree — known as Law 140 — issued by Sisi in November 2014 that allows the repatriation of foreign prisoners to their home countries, at the president’s discretion, to serve their time or be retried there. Mada Masr quoted legal scholars calling that law unconstitutional because it discriminates against Egyptian citizens.