The family of Ramy Shaath — the son of Fatah official and former Palestinian Minister of Foreign Affairs Nabil Shaath — has had no luck getting him released since he was arrested in July on what the family says are trumped-up terrorism charges. 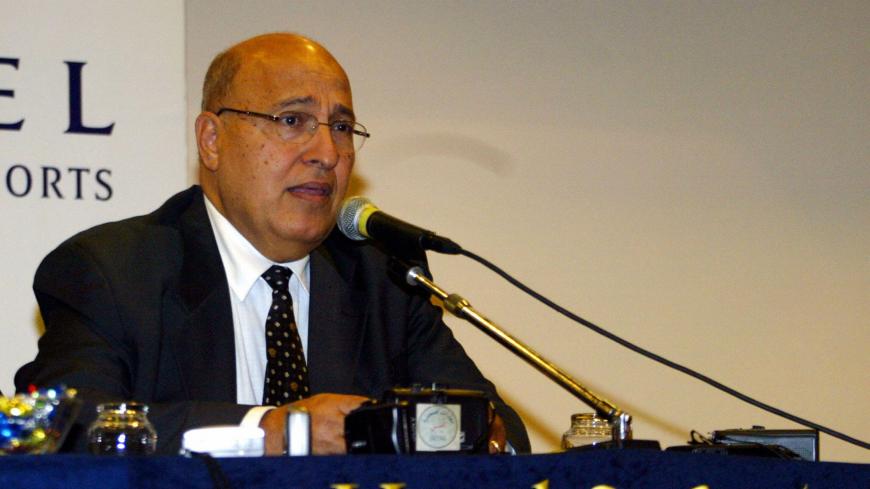 Nabil Shaath holds a press conference in Paris on Nov. 9, 2004, during his two-year stint as Palestinian foreign minister. Shaath, now 81, is trying to get Egyptian authorities to free his son Ramy Shaath, who is the coordinator general of BDS Egypt. - JEAN-LOUP GAUTREAU/AFP/Getty Images)

CAIRO — The Egyptian state security prosecutor's office has again extended the detention of activist Ramy Shaath, the son of a former Palestinian foreign minister, on suspicion of having terrorist ties, an accusation his family denies.

Shaath was arrested July 5 at his Cairo home after prosecutors added him to a list of previously arrested suspects that includes journalists, businessmen, politicians and former members of the Egyptian parliament, and involves 19 companies. All the suspects are accused of being members of and funding the Muslim Brotherhood, which Egypt considers a terrorist group.

The Shaath family issued a statement Aug. 21 saying, "A large number of heavily armed security men stormed ... and searched his residence without providing any legal document to allow them to do so. ... [They] seized computers, CDs and cellphones.” When Shaath asked for an explanation, the security officers didn't reply, according to the statement, which was published on the Egyptian Commission for Rights and Freedoms website. The statement also said Shaath's wife, Celine Lebrun-Shaath, a French national, was deported without being able to contact the French Embassy in Cairo.

Ramy Shaath's family demanded that the security forces release him immediately “given the lack of evidence against him, and to allow his wife’s return as soon as possible to stand beside her husband, and because she works and lives in Egypt.”

But on Aug. 27, the prosecutor's office decided to extend Shaath’s detention for 15 more days in the case, after repeated previous extensions.

His family, and others, think his detention has nothing to do with the Brotherhood, but rather his activism.

Shaath, 48, is coordinator general of the boycott, divestment and sanctions (BDS) movement against Israel in Egypt and served as secretary-general of the liberal Constitution Party before it was officially established in 2013. BDS Egypt condemned Shaath's arrest and stressed the need for security forces to release him immediately. In an Aug. 21 Facebook post, the group wrote, “The Egyptian Ministry of the Interior is responsible for the general coordinator’s security and personal safety.”

BDS Egypt also called on Egyptian and international media outlets "not to circulate misleading news and repeat false accusations that would harm [Shaath] and his family.”

The family's statement added that Shaath “is under arbitrary arrest because of his legitimate and peaceful political activities. He is a defendant in an unfounded criminal case, in the absence of any genuine evidence against him, except for the charges the police concluded and which neither his lawyer nor he are allowed to inquire about. The Egyptian state security services arrested Ramy for his declared positions against political oppression and ongoing advocacy for the rights of Palestinians against the Israeli occupation and apartheid.”

Speaking to Al-Monitor on condition of anonymity, a family member revealed why the family waited until Aug. 21 to issue its statement about his arrest. The source said Shaath's father, Nabil Shaath — a former Palestinian foreign affairs minister and current adviser to Palestinian Authority President Mahmoud Abbas — wanted to open negotiation channels with Egyptian authorities before resorting to public pressure, but the talks failed.

"In the past weeks, a PA delegation arrived in Egypt in an undeclared visit, and started negotiations with the Egyptian security forces. ... There were promises that he would be freed, yet such a thing has not happened so far," the source said. "The Egyptian authorities have turned a deaf ear to the Palestinian delegation and its demands, and continue to delay a response on the actual reasons behind the arrest.”

Abbas himself spoke with Egyptian authorities on Ramy Shaath's behalf, the source said.

The Interior Ministry had announced the arrests of the other suspects in June, when they were accused of planning to form a terrorist cell in coordination with the Muslim Brotherhood.

Murad Ghrab, a Muslim Brotherhood leader who fled to Turkey in 2014, told Al-Monitor by phone, “I honestly have no idea about any coordination between the Brotherhood and defendants in the case, more precisely with Ramy Shaath.”

An Interior Ministry media official said that the case has been referred to the judiciary and that the security service is no longer involved. Ramy Shaath will be released if the Egyptian judiciary finds him innocent, the official told Al-Monitor on condition of anonymity.