Egypt back as ringmaster as Palestine talks progress

Egypt seems to be regaining its regional status as peacemaker in the Palestinian file as ties warm with its allies. 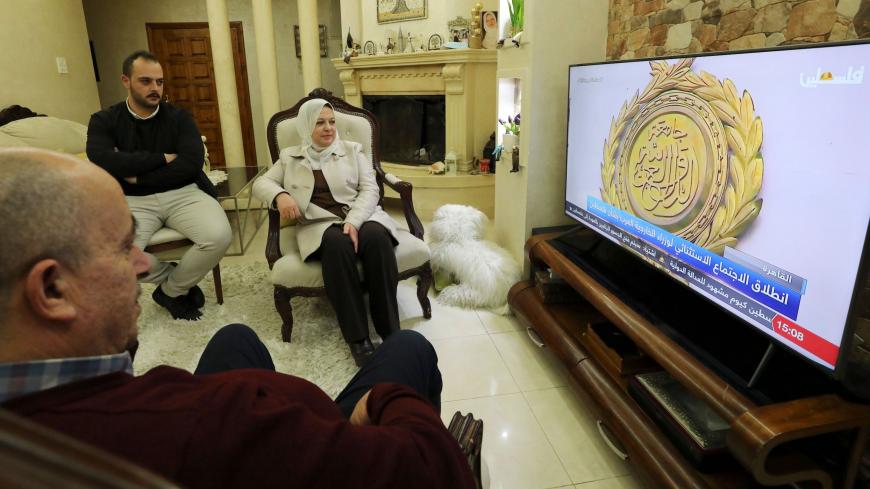 Sahar Qawasmeh (C), member of the Palestinian Legislative Council representing the Fatah movement, watches coverage of the Egypt-hosted Palestinian National Dialogue at her home in the the West Bank city of Hebron on Feb. 8, 2021. - HAZEM BADER/AFP via Getty Images

After politically turbulent years, Egypt appears to be regaining its footing as a Middle East leader on the Palestinian-Israeli issue.

The change of guard in Washington and the recent reconciliations in the Gulf, accelerated after former US President Donald Trump’s departure, appears to have allowed Egypt, with its standing, geography, history and political alliances, to emerge as a potential kingmaker in the chaotic Palestinian affairs.

The second week of February saw the Egyptian capital host two very important meetings: an emergency meeting of Arab foreign ministers to discuss Palestine and the inter-Palestinian meeting. The first produced a strong pro-Palestinian statement despite the weakening of the Arab peace plan due to the normalization fever of Trump's last months in office.

The Arab foreign ministers affirmed their “rejection of any unilateral Israeli projects or steps that negatively affect the rights of the Palestinian people, violate international law and undermine the two-state solution, for which there is no alternative.”

While he spoke, it was reported that Egypt had decided to keep the Rafah crossing permanently open, a decision that will contribute to easing tensions and allowing freedom of movement while at the same time reducing corruption at the crossings, where bribes were rampant.

Egypt, which aside from Israel is the only country sharing a land border with Gaza, has always been active on the issue of reconciliation, though results have been elusive. Although Turkey was not a direct sponsor of the meeting at the Palestinian Embassy in Istanbul last September, the breakthrough it produced angered Cairo, which wanted acknowledgement of its role in the reconciliation process.

Egypt was the first Arab country to make peace with Israel and has coordinated closely with the Israelis since Sisi took power. Relations with Israel are not limited to security coordination as Egypt appears to be helping Israel politically by detaining Ramy Shaath, a Palestinian-Egyptian activist with the Boycott, Divestment and Sanctions movement. Shaath has remained in jail since July 2019 despite Amnesty International calling for his release and appeals by Palestinian officials to the Egyptian government. Ramy is the son of Nabil Shaath, a senior adviser to Abbas.

Egypt's alliances with Saudi and other Gulf countries have paid dividends. The recent reconciliation between Saudi Arabia and Qatari also has meant that Egypt can expect the pro-Hamas Qatari government to support its efforts. There is also the recent improvement in ties between Egypt and Jordan, which has close ties to Abbas.

Cairo’s sponsoring of the Arab League conference for Palestine and the inter-Palestinian talks is being done with an eye on the administration of US President Joe Biden. Egypt, whose president Trump described as his “favorite dictator," knows that it needs to do something to show its value to the US leader. Nothing could be more helpful to the Egyptians more than ending the one-party rule in Gaza and and legitimizing the Palestinian elections.

The administration of Egyptian President Abdel Fattah al-Sisi has noticed that the Biden administration is not keen on talking to it or to Egypt's Saudi allies, for whom Washington has a list of human rights violations to address. Unwilling to make compromises on the human rights front, the Egyptian government appears to be set on presenting itself as a strong Arab party that can produce a moderate, democratically legitimate and united Palestinian front in any future negotiations. If he can pull it off, it will be Sisi’s winning card when the US president connects with his Egyptian counterpart.

It is not clear whether the Palestinian card alone will be able to wash away Egypt's many sins but it will surely mean Cairo is a regional factor that can’t be ignored.